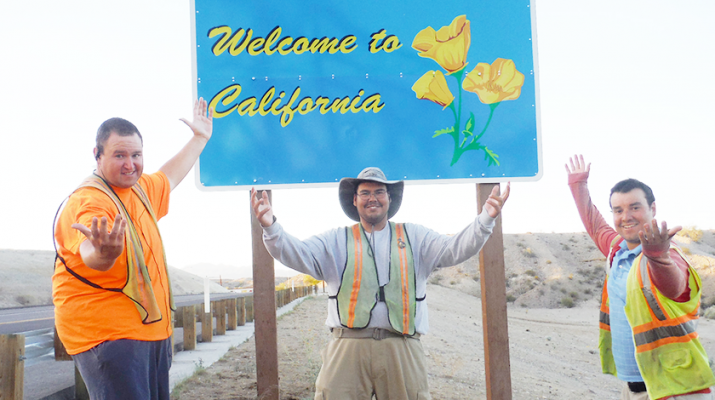 Buffalo-area trio makes 2,700-mile cross-country walk for health — and loses dozens of pounds in the process

At 478 pounds, Jason Rogers was at his all-time high weight during his 2013 physical.

“There has to be an alternative,” thought Jason, who had struggled with weight and health-related issues most of his life. Jason was determined to do what he needed to do to stay out of the operating room.

“I knew I needed to lose weight and I wanted to avoid the surgery,” stated Jason. “So I started walking.”

Walking has long been proclaimed in the medical community to be a great low-impact means to improve heart health and assist in weight loss. But starting out at 478 pounds is no easy task. So, beginning in the fall of 2013, Jason enlisted longtime friend Chris Cooke as his walking partner, which worked well for both of them as Chris was tipping the scale at 340 pounds.

They started walking around the neighborhood a few blocks at a time. The blocks turned to a mile, and those miles began to add up to nearly a 10-miles-a-day walk — and it was working. The pounds began to drop and the energy levels were increasing in these men that hail from the Riverside area of Buffalo.

By early spring, Jason had lost just over 90 pounds and Chris had lost 15.

They were feeling better than they had in a long time. One day, one of them suggested during a daily journey, “Hey, wouldn’t it be cool to just keep walking, and walk to California?”

The cross-country concept struck a chord in each of them and they started doing a bit of online searching into people that had walked across the country — what gear they used, the issues they came across and the funding that was needed.

Before long, Chris’ brother Joe Cooke, weighing in at 218 pounds, was also incorporated into the plan. Although Jason and Chris thought of this as a unique way to lose weight, Joe’s interest held more of a “document the trip and see the country” appeal.

So with a few months of planning and a couple practices on how to pack the converted baby strollers that would carry their gear, and pitch unanchored tents that would become their nightly recluse from their hiking mates, they took to the road in May 2015.

“We were unrealistic and unprepared for what we were about to encounter,” stated Joe. “I really thought my one pair of sneakers would last the duration of the trip.”

It wasn’t just sneakers that were underestimated. Types of food that were viable, ability to order prescription medications to nearby pharmacies for their medical conditions, and what products they actually needed and which were dispensable were hot topics at the onset.

Even the availability to find dry, available places to set up tent at night proved more of a challenge than anticipated. After being instructed by law enforcement that tenting was unavailable anywhere in the Route 5 area of Buffalo, their first night was spent at a friend’s home in Lackawanna. The trio learned early on that the trip could be a bit more problematic than anticipated.

Despite their unforeseen woes, the tenacious trio did not give up. That one pair of sneakers eventually turned into approximately a dozen pairs of Brooks sneakers for each of them. The guys were specific to the make of sneakers, having promptly learned how to avoid blisters by staying with the same brand.

It wasn’t long before they could anticipate the township they would be in when their sneakers began to give way, and could order shoes via their cell phones and Internet so they could be delivered to the post office of the upcoming town just as they arrived. They continually turned to the Internet for guidance and found financial assistance on their Go Fund Me page that was set up to help subsidize the trip, and applicable advice on their “2700 Mile Rotund Challenge” Facebook page that they had initiated to get the word out about their adventure.

“We could not have finished the trip without our Facebook group,” Joe said. “They helped us whenever we had issues. Many of them were military and ex-military and had great advice.”

Some of the tips shared were to use duct tape on the “hot spots” of their feet to minimize blistering. When dehydration hit them, they were told to use the color of their urine to determine if they should drink more water — “yellow meant drink more; clear for you’re good for now,” Joe said.

Relying heavily on the Facebook advice of those who know how to “make do” without much, the trio leaned on the guidance of hundreds of people that followed their travels.

Flocks of folks went out of their way to assist the walkers. A group near Witchita, Kan., invited the trio to their Halloween party and allowed them to spend the night in their warm facility. Traveling routes previously traveled by William H. Bonney, also known as Billy the Kid, the guys hit New Mexico during a raging snow storm that lasted from Christmas through the New Year, and despite the locals being upset by the power outages, the Riverside trio enjoyed the dry, unheated shelter afforded them by a few new friends.

They were accustomed to not having electric, and the weeklong respite from walking could not have been better timed.

“Our bodies had taken a beating,” admitted Chris. “We needed a break.”

While state after state seemed to experience out-of-the-ordinary weather just as the trio walked into town, the three guys experienced out-of-the-ordinary kindness and gestures of goodwill from total strangers they met. Postmasters bent the rules to allow packages to be delivered for them; Facebook allies met up to offer warm food and supplies; and time after time residents along the way offered up their grassy yards for a night of “lawn camping,” where the guys would assure the owners that there would be “no litter, no staking and no camp fires.”

It became their lawn camping motto. Finally, on April 23, the trio walked into Santa Monica Pier, Calif. They were greeted by a host of supporters who came out to wish them well at the end of the journey.

Upon arrival back in Buffalo nearly a year later, Joe’s weight was generally unchanged. Chris dropped from 340 pounds prior to his walking routine to 304 pounds. Jason, the most drastic change, dropped from 478 pounds that day at his doctor’s office to 332 pounds upon his return to Buffalo.

The Riverside trio continues to walk, and being home, are trying to eat healthier as well, a task that proved difficult on the road. Jason’s resting heart rate is 68 beats per minute, signifying good cardiovascular fitness, and in the same range as his walking comrades. While the guys are adjusting back to life with a roof and bed, their trip is one that has forever changed their lives.

Miles between Buffalo and the Pacific Ocean at Santa Monica Pier? 2,700. Total weight loss between three friends during the trip? 182 pounds. Funds needed to get from Buffalo to sunny California? $14,615. Dollars spent on Brooks sneakers during their trip? $3,700.

Memories spread over 12 states in 12 months for three men in their 30s, who have now walked their way to a healthier future? Priceless.