Columnists Healthcare in a Minute
November 29, 2019
Posted By: admin 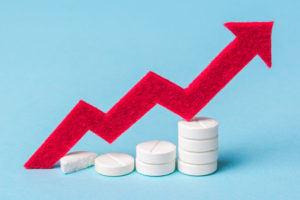 Before we overhaul our expensive healthcare system, we have to start with drug prices. So, Congress needs to get this seemingly no-brainer bill done first.

It is well documented, almost ad nauseum, that we pay way more for drugs (and use way more drugs per capita) than most countries.

We spent $345 billion or over $1,000 per person on drugs last year. In countries with a single payer or universal healthcare model, the government uses its purchasing power to negotiate prices with drug manufacturers.

So why doesn’t CMS use its staggering 130 million people purchasing clout to negotiate drug fees? What’s the holdup? Simply: the drug lobby. It is the No. 1 lobby on the Hill, by far, spending $4 billion over the last 20 years and employing almost 1,300 drug lobbyists. That’s 2.4 lobbyists per congressperson. How are they not tripping over each other as they enter and exit congressional offices?

Why drug prices are so high and still going up? Blame the drug lobby. They are the largest of all lobbies in Washington D.C., spending $4 billion over the last 20 years and employing almost 1,300 drug lobbyists. That’s 2.4 lobbyists per congressperson.

The ubiquitous drug lobby has succeeded in making this no-brainer issue into a partisan issue by contributing heavily to campaigns.

Curiously, by comparison, there is little to no partisan bickering or compunction when it comes to setting prices for hospitals and physicians. By doing so, Congress has unwittingly limited its ability/cash to spend like the drunken sailor drug lobby.

The drug manufacturers attribute their high prices and exorbitant profits to research and development, the cost of going through FDA approval, getting the drug to market and potential lawsuits.

All debatable, but I’ll concede those points.

So, this begs the question: why are they negotiating prices with anyone? Apparently, the U.S. government and U.S. consumers — paying anywhere from four to 120 times the price paid by other countries — are bearing most if not all of the costs of drug development.

A lot of congressmen continue to parrot the drug lobby mantra that controlling drug prices will lead to less innovation and new drugs entering the market. No one is begrudging drug manufacturers a fair profit. Congressman Tom Reed (R-NY) incredibly said, “You are putting too much weight in the hands of the government dictating price.”

But isn’t that how negotiations work? Isn’t that the whole point?

Why can’t CMS be the 800-pound gorilla at the negotiation table when it comes to drugs? We’re talking 130 million lives.

Despite the almost unanimous consensus that drugs cost too much, you can thank the drug lobby the next time you are at a fundraiser for a friend who can’t afford their cancer drugs.

CMS indifference to providers continues. No negotiating here. The 2020 fee schedule at least gives physicians a paltry 1-2% increase, but then alters the hoops they have to jump through to get paid. Physical therapy fees will be cut 8% and psychology fees 7% in 2021.