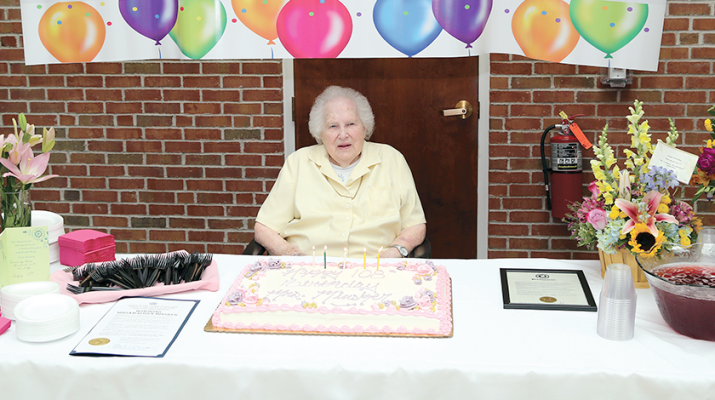 Miriam Rosen Minsker thinks her simple approach to life is the reason why she was recently able to celebrate her 108th birthday.

The soft-spoken but quick-witted woman believes her philosophy of taking life “one day at a time” is something that others should take note of if they have aspirations to living anywhere close to as long as she has.

“So many people fuss and make a racket but it really shouldn’t be that hard,” says Minsker, who spoke after being lauded by family members, friends and elected officials at a recent party at Beechwood Homes in Getzville. “You just have to do it one day at a time and that means staying healthy and staying calm.”

Minsker was born in East Aurora in 1908, a time when the average life expectancy was 47 years old. The median annual salary then was $300, the cost of one dozen eggs was 14 cents and the president of the United States was Theodore Roosevelt, a man Minsker describes as “a great leader for our nation.”

Minsker’s family had deep roots in East Aurora, as her father, Cy Rosen, served as superintendent of printing on the historic Roycroft campus. Her father worked for Elbert Hubbard Sr., the man who founded Roycroft in the late 1890s. The family lived in a home based on the Roycroft property on Main Street in East Aurora. Minsker herself later worked at Roycroft, first as an employee in the pamphlet bindery while attending college then later as a secretary and bookkeeper.

Her memories of being employed by the Hubbard family include happy stories that recall her family’s pride in working for a locally-owned and operated company that employed other East Aurora residents, which helped churn early economic development in the village and surrounding communities.

“They were kind people to work for and be around,” recalls Minsker. “They were good to my father and our family. They took care of us.”

Minsker attended Syracuse University for two years before transferring to the University of Pittsburgh, where she received a degree in business administration, an impressive accomplishment during an era when it was not very common for a woman to pursue a secondary education.

“I wanted to learn, I loved to learn,” says Minsker. “It was very important to me and my family for me to get that schooling. I am glad that I did it.”

They were among the first residents to move into the Asbury Pointe Retirement Community when it opened in 2000. Minsker has many fond memories of over a dozen years living at that facility and also praises the employees of Beechwood Homes, where she has lived since 2013.

“I stay healthy and stay calm because my meals are made for me, they help keep my room clean and let me spend time with my friends,” says Minsker. “If you have your health and can stay calm and not get too upset, you can live a long and happy life just like me.”