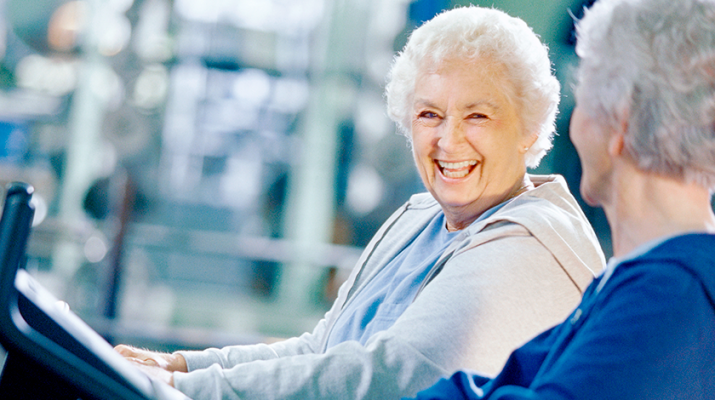 Aerobic exercise may offer protection from cognitive decline, according to two recent studies.

• Researchers at the University of Southern California in Los Angeles in 2017 published a report showing that about one-third of Alzheimer’s disease cases could be prevented through changes in habits — including exercise.

• A small study by the Center for Aging and Health at the University of Gothenburg in Sweden showed up to a 90 percent reduction in dementia associated with fitness regimens begun by women in their 50s who were followed for the next 44 years. Very few of the fittest women experienced dementia. The benefit lessened for women who were active, but not as fit, according to the study.

Although any activity is better than no activity, an occasional stroll to the mailbox or quietly puttering in the garden won’t do it. To achieve this positive effect, the World Health Organization recommends that people 65 and older participate in at least 150 minutes of moderate to 75 minutes of intense activity every week.

You may not dream of achieving a buff beach body, but staying fit may benefit the brain.

Other studies indicate that starting younger in life offers the most benefit, but “it’s never too late to start,” said Cathy James, co-chairwoman of the New York State Alzheimer’s Association Coalition. “Sometimes we think of high impact, but even moderate exercise may help us lower our risk for things like Alzheimer’s disease and it can contribute to brain health.”

Richard Durwall, 83, is known as “Mr. Fitness” at senior centers throughout the Buffalo area where he leads fitness classes. A lifelong athlete, Durwall personally vouches for the benefits of fitness.

“Yes, there’s a connection there between fitness and reducing risk of Alzheimer’s,” he said.

Several years ago, he said he met a well-known expert in Alzheimer’s disease. Durwall said that he was told the cutting edge research is pointing to exercise as the best way to reduce risk of this type of dementia.

“Your mind is a reflection of your physical being to a great extent,” Durwall said.

He encourages people to find activities that involve the mind and the body at the same time or that can be varied to engage the mind, such as taking a different route walking or biking.

If the exercise involves learning and retaining skills, such as taking a martial arts class, that may offer more benefits, as would exercise that’s social in nature, such as participating on a sports team. Involving music could also promote more brain activity while in motion, such as a dance class.

“We don’t know enough about what causes dementia to know what about exercise could prevent it,” Stall said. “It’s exciting if there is something that exercise can change the physiology to prevent dementia.”

Before undertaking any change in nutrition or exercise, consult with a health care provider. A personal trainer may offer helpful advice for exercising safely and effectively.