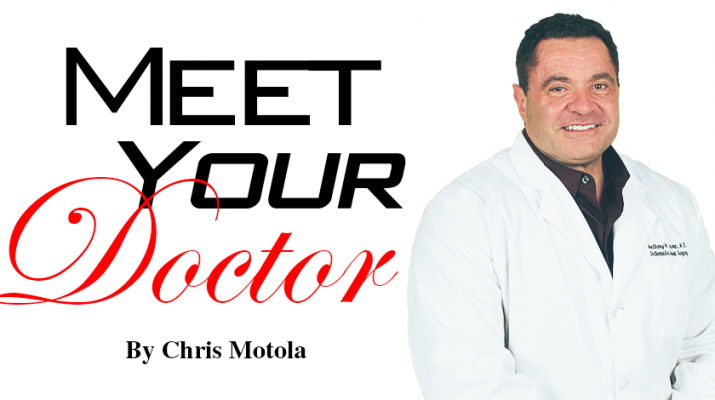 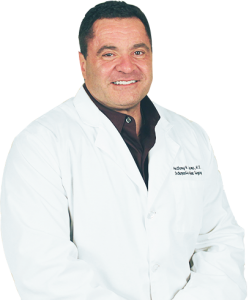 Q: Give us an overview of your specialty and the patients you see.

A: I’m a board-certified spine surgeon. I’ve been doing it now for 22 years and have been in private practice for most of that time. My approach has always been very minimalistic; less is better. I prefer to use conservative treatments and, if those fail, use surgery if the patients’ symptoms warrant it.

Q: Traditional spine surgery has kind of an ominous reputation. What are some of the factors that, in the past, may have led to patients defering spine surgery?

A: A lot of the patients that I see in Buffalo want to avoid surgery because they’ve heard of instances where spine surgery went poorly. Almost everyone around here seems to know someone who has had a bad experience. These are fairly large procedures. When you operate on someone’s joints, not to lessen that type of surgery, it’s unlikely that you’re going to make the situation worse. When someone breaks a bone, you put the bone back together and in position and, in all likelihood, the patient will be better off than before you intervened. Likewise, if you have arthritis in your shoulder, there are joint replacements that have a 95 percent chance of getting rid of 95 percent of your pain. Spine surgey isn’t like that. When you do surgery in someone’s spine, you have something more like a 75 percent chance of getting rid of 75 percent of their symptoms.

Q: Why is that the case?

A: The bigger the procedure, usually the bigger the risk. When you’re operating on someone’s knee, it’s usually only the knee that you have to worry about. When you operate on the bones of the spine, you have all of the nerves right in the vicinity of where you’re doing all your procedures. Many of the procedures, like fusion, are irreversible. Less is usually better with surgery. In situations where the discs are collapsed and there’s instability, those are larger procedures. That’s how I became interested in minimally invasive robotic spine surgery.

Q: How does robotic spine surgery solve some of these issues?

A: The minimally invasive robotic spine surgery lets you take a surgery that typically had a long recovery, a measurable amount of blood loss, a significant amount of post-op pain and turn it into something far more manageable and far less frightening for the patient. What was once done through a 7-inch incision or larger in the middle of the back, is done through a 2-inch incision. The standard way of doing a fusion from the back was a mid-line incision in the middle of the spine. You would then strip out all the soft tissues — muscle, ligaments — off the spine. And when you looked down, it was almost like looking at a model. Now we don’t have to strip the muscles off the spine. As you can imagine, that used to cause a significant amount of pain and blood loss. When you do that much trauma to the muscles they often wouldn’t ever function quite the same again.

A: Now, [it’s done] through a small incision. On Monday, a patient had pain in his right leg, so I went in through the right side, removed the bone where the joint is, which allows access to the disc space. Through that tiny incision, I was able to decompress the nerves, which was responsible for the leg pain. You can access the disc, remove it, and separate the bones. In his case, the two bones had collapsed the disc space was about half what it should have been. We were able to open the disk space, separate the bones with a ring that’s called a cage. Inside the ring, you put a bone graft — which is the bone you removed on the way in because nothing gives you [better] fusion results than the patient’s own bone. Then you can program the robot to put the screws in through the same incision.

Q: How are the outcomes?

A: The day after the surgery, the patient’s leg pain was gone and he went home. He was on oral pain medicine and was able to get up and move around on this own. It’s still amazing for me, because I’m used to seeing people who have gotten fusions have a hard time even rolling over in bed the next day, let alone sit up, stand and walk across the room. But thanks to the enormous decrease in damage to soft tissues and the smaller incision — and being able to put the screws in through the same incision — recovery is so much better. We don’t have to strip the muscles, we just part the fibers. It also has the secondary benefit of allowing us to avoid prescribing powerful painkillers which, given the size of the opiate epidemic right now, is a good thing. Most patients are off painkillers within a couple weeks.

Q: How difficult is it to become a board-certified spinal surgeon?

A: The American Academy of Orthopedic Surgery is the board that certifies us. After you complete your M.D., complete your residency, take a written test, after you’ve been in practice for a few years, they pick 10 surgeries you’ve done. Then you defend your treatment of those patients, orally, to a board of your peers. Every 10 years, you take a recertification exam and show that you’re keeping up with current technology. It was in the process of doing that that I came across the robot in Chicago. At the time, I didn’t expect local hospitals would be willing to make such a large capital investment at the request of one doctor. But they saw the sense of it. Every other kind of surgery seems to be following that path, so why shouldn’t spinal surgery? In many cities every doctor doing spine surgery is using this technology. You don’t want to be the only surgeon in town doing it the old way. For patients, it’s a pretty obvious choice.