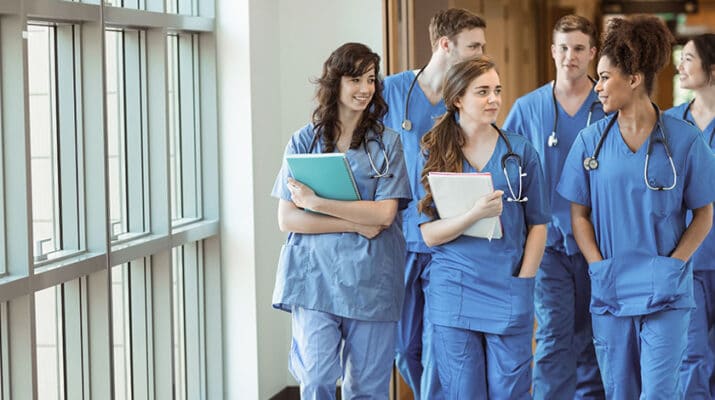 Jacobs School of Medicine has seen an increase of roughly 40% from this year over last — is it caused by the Fauci Effect?

A recent national spike in applications has been dubbed “The Fauci Effect” based on the notion that the increase is driven by a widespread admiration for the work of Dr. Anthony Fauci, director of the U.S. National Institute of Allergy and Infectious Diseases and the chief medical advisor to the president.

In few places has that rise been so dramatic as right here, in Buffalo.

According to physician Dori Marshall, associate professor of psychiatry and director and associate dean of admissions for the Jacobs School of Medicine at the University at Buffalo, while the national rate of applications for medical school are up roughly 18%, the Jacobs School has seen an increase of roughly 40% from this year over last.

Marshall noted that while Fauci has certainly become a household name, that only happened in March or April of 2020 and one cannot simply decide to apply to medical school that summer without having prepared in many ways. She instead attributes the increase to other factors, including students who had potentially been thinking of taking a gap year before starting medical school, but had those plans derailed and decided to go directly to medical school instead.

Marshall also pointed out that because all interviews have been conducted virtually, applying to far-flung schools has been less cost-prohibitive for many students.

“They didn’t have to incur travel expenses,” she said. “Because all of our interviews have been virtual, for people from say California or Maine, it’s easier to get here.”

And cost is certainly a factor for many students. According to Marshall, the number of students requesting financial aid this year increased by 111%.

While Marshall is hesitant to chalk up any of the changes to Fauci himself, there has been an underlying theme she has noticed when it comes to what’s driving applicants.

“[In interviews] I haven’t heard anybody talk about Anthony Fauci, so I don’t think he’s having an impact. But, the pandemic certainly is,” she said.

“Many students are committed to going into medicine to address some of those disparities and make the delivery of healthcare more fair and equitable,” she said.

For Joya Ahmad, 28, and Alexandrea Adams, both of whom have been accepted to the Jacobs School, that reality is a major factor in what is driving them into the medical field.

As a Detroit native, Adams said she has seen those disparities play out first-hand, and hopes one day to be among those trying to end that trend.

“Definitely being from Detroit has encouraged me to be a physician, just seeing the lack of health and healthcare within that setting and it’s the reason why I want to serve in a marginalized, underserved community,” she said.

In her undergraduate studies, Adams double-majored in biology as well as public policy, a choice that she said has become ever more pertinent as the pandemic goes on.

“I think the pandemic has further showed me how important it is for medical professionals to have a public health background,” she said.

Ahmad has worked with underserved populations in the past, but said that the response to COVID revealed even more stark disparities that exist within public health and health care.

“That really stoked the fire for me,” she said.

So much so that she began working with a personal protective equipment delivery nonprofit organization called Med Supply Drive, where she has been active for roughly a year.

“That work really drove home the idea of two countries that exist within one,” she said.

She said that when she does pick a school — neither applicant has made a final choice yet — opportunities for community involvement will play a role in that choice.

Ahmad also said that racial tensions and issues such as police brutality have further demonstrated the existence of two realities within one border, and further galvanized her to go into work where she feels she can make a difference in marginalized communities.

The soon-to-be medical school student said that there is a daunting amount of work to be done. She worries that in some ways, things will get worse before they get better.

“Vaccine rollout and how re-opening goes is really going to lay bare more societal and structural issues,” she said.

While that outlook may seem less than sunny, it is that uncomfortable and painful reality that she hopes will drive her and other to make real change as members of the medical community.

“I’m sad that this is where we’re at,” she said. “But it feels better to know that I can have a hand in doing something about it.”