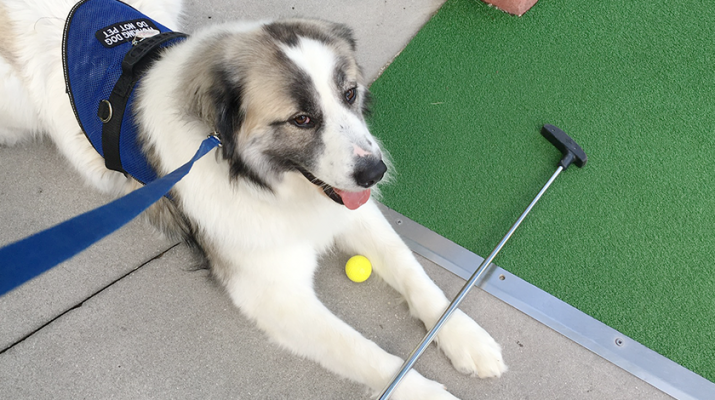 While the seeing eye dog may come to mind when picturing a service animal, service dogs can perform many other important jobs to help people with disabilities or medical conditions.

Carol Borden, founder/CEO with Guardian Angel Medical Service Dogs said that although guide dogs have been used in the US since 1929, other types of service animals have become widely known only in the past 40 years.

Borden said that service dogs can help with both “visible” and “invisible” needs, including mobility, retrieval, tasks and warning of seizures or low blood sugar.

“Dogs have a very sophisticated sense of smell,” Borden said. “They know as soon as there’s a chemical change in the body such as a diabetic change and they can alert if it’s too high or low.”

Guardian Angel trains dogs for a specific type of service to which the dog demonstrates interest and aptitude.

Puppies all receive the same basic training for socialization and desensitization and during that process, the dog’s talents becomes clear to trainers.

“Does he like to use his nose?” Borden said. “Does he bring every stick and stone in the yard?”

The organization also learns about potential recipients to see what needs they have and what type of dog would work well with their household.

Once a good match is made, the dog learns advance skills needed for that recipient. Then the dog and recipient train and bond together.

“Once they’re ready to go home, they’re in good working condition,” Borden said. “We continue to keep up with them for the life of the team.”

Guardian Angel uses German shepherds mostly because they mature more quickly than other breeds and are a working breed that enjoys learning.

Beverly Underwood serves as president of Canine Helpers for the Handicapped, Inc. in Lockport. She said her organization is one of the first schools to work with people with multiple disabilities. In the organization’s 35 years, Canine Helpers has placed more than 750 dogs placed nationwide.

“There aren’t many disabilities for which dogs can’t help,” Underwood said.

Her organization has puppies raised in foster homes and then figures out the dogs’ aptitude. Each dog receives customized training and then trains with the client a couple weeks “to become an efficiently working team,” Underwood said.

Her organization provides lifetime support to the dog/handler team and the animals can receive additional training if they need to provide more services.

Canine Helpers will also train the individual’s pet dog if it has the right temperament and is the appropriate size to offer help.

So what’s the difference among a service animal, emotional support animal and therapy animal?

The Americans with Disabilities Act recognizes only dogs and, rarely, miniature horses as service animals.

• trained to help one person mitigate the challenges of a disability.

• allowed to go anywhere the person may legally go.

• owners may only be asked, “Is this a service dog?” and “What tasks are your dogs doing?”

• are not required to have a special vest or owners to bear any paperwork (although the former can be helpful in identifying service dogs).

• trained to help one person.

• not allowed everywhere in the same sense as service dogs (though some establishments allow them).

• trained to exhibit good manners and interact with a variety of people to spread goodwill but not help with any tasks.

• with permission and certification of training, may enter places such as nursing homes, schools, hospitals, or libraries for story hour.

Underwood said that she wishes more people understood that it’s important to never pet or engage with service animals that are on duty. It’s distracting and goes against their training.

She also wishes more people understood that her organization will not train pet dogs to become service dogs just so that people without disabilities can take their pets everywhere.

Fake service dogs have become a problem, according to Borden. Fraudsters obtain a counterfeit vest and identification card to impersonate someone who needs a service animal to take their pet dogs wherever they wish.

“It’s disrespectful to those who need to have these dogs,” Borden said. “I can’t tell you how many times our dogs have been attacked by impostor dogs. It damages the psyche of the service dog and they become defensive and bark at other dogs. They do not have the manners nor act appropriately. Service dogs should be invisible if they’re not doing anything.”