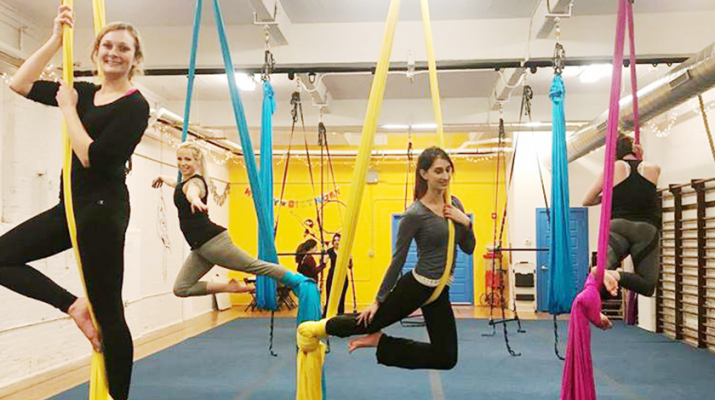 Up! Aerial Fitness has made a name for itself over the last year and now will host its first showcase where students and instructors will perform using apparatuses such as aerial silks, lyra, trapeze and aerial hammock.

Where Fitness, Flying and Confidence Collide

The aerial and circus arts culture is often rare or unheard of in many cities, but Western New York has fully embraced this unique type of exercise. Up! Aerial Fitness is a studio that has not only brought more of this culture, as well as other cirque-related workouts, to the greater Buffalo area, but has also brought a sense of positive self-worth and confidence to the many students who now call this little studio their second home.

“It’s an opportunity for an adult to feel like a kid again,” said Ashley Acevedo, a mother and aerial silks student at Up! Aerial Fitness. Acevedo, like many students new to circus arts, has found the experience to be a welcoming way to meet local individuals while learning new, challenging skills.

A Cozy Studio Set in a Historic Building

The brightly colored space opened last summer and since its arrival has brought positivity, passion and, of course, a healthier sense of self to those who have walked through the historic doors. The studio is tucked away in the basement of historic School 56 on West Delavan Avenue in Buffalo, and the bright colors and comfortable setting brings a comfortable environment to all who partake.

“Up! Aerial Fitness offers fitness and circus-style training courses that target the whole body and pesky core muscles as participants literally learn how to fly,” said Kim Eichorn, the owner, manager and lead instructor. Eichorn has seven years aerial experience and studied at The Philadelphia School of Circus Arts as well as Aerial Arts of Rochester — the “sister studio” to Up! Aerial Fitness. “There are so many different classes to attend that you never get bored. Everyone supports and cheers each other on to reach that next goal,” Eichorn said.

The studio has many workouts available, including session classes, utilizing apparatuses such as aerial silks, aerial hammock, lyra (aerial hoop), trapeze and the studio will soon be introducing the aerial swinging pole to the mix. Since many adults live busy lives and cannot commit to weekly, scheduled classes, Up! offers walk-in classes such as bungee dance, aerial yoga, fly barre trapeze as well as many more. The studio also hosts a range of kids, classes as well as group parties for both children and adults.

The Showcase Will Highlight Local Talent

Those who attend classes have not only seen an improvement in their aerial skills, but also in their confidence level during their time spent at Up! Aerial Fitness, the studio owner said. The studio promotes a positive sense of self along with the large assortment of classes available, and those who partake in classes often leave feeling uplifted and mentally strengthened.

Since many students, and instructors,\ have gained this newfound sense of confidence, they are diligently preparing performances for the first-ever Up! aerial showcase. Performers of all ages and abilities will showcase their skills using apparatuses such as the aerial silks, aerial hammock, lyra and trapeze.

For more information, call 716-427-2107, vist www.UpAerialFitness.com or send an email to upfitnessbuffalo@gmail.com.