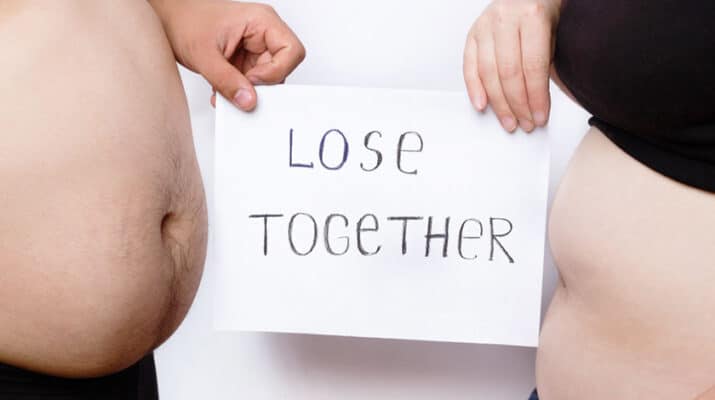 Although the study of 824 patients focuses on heart attack survivors who would benefit from weight loss, smoking cessation and physical activity, the study’s most striking finding is that undertaking weight loss with a partner rather than solo works better.

“Lifestyle improvement after a heart attack is a crucial part of preventing repeat events,” said Verweij as quoted by www.sciencedaily.com. “Our study shows that when spouses join the effort to change habits, patients have a better chance of becoming healthier — particularly when it comes to losing weight.”

Those with a partner were more than twice as likely to participate in a healthful lifestyle change than those without a partner.

The finding makes sense to Lucy Connery, who has a master’s in public health and serves as executive director of Healthy Communities 2030! in Buffalo.

“It is more helpful when taking part in a fitness program as a couple, family or even in a group of friends because of the support it offers,” she said. “It is difficult to make changes by ourselves, and if the people around you are partaking in unhealthy behaviors, it makes sticking to our goals more challenging.”

The hassle of cooking two meals — a healthful one and a not-so-healthful one — can become a drag. But cooking a healthful meal to share with someone who wants unhealthful food can hurt the relationship. That’s why if everyone in the household eats healthfully, it’s easier.

In addition to food, the principle applies to fitness. Undertaking something painful — beginning to exercise again — is easier when someone else is with you.

If the other person is not ready to get healthy with you, you can do it on your own with a little planning.

Richard Derwald coordinates the Erie County Senior Fitness Program in Erie County which before the pandemic drew 1,000 senior participants per week. He gets together with his son, Richard K. Derwald, for workouts and finds that motivational since his wife is not interested in working out.

As a boy, the elder Derwald “did not have one athletic gene in my body,” he said.

He began reading about fitness and started exercising as a teen so he could compete in school sports. By the time he was 19, he was a performing wrestler, participating in wrestling events all over the Northeast.

“Exercise became a lifestyle for me,” he said. “That’s why I’m such a believer in exercise. I am 85 years old and I look and feel pretty good.”

He said that trying to drag an unwilling spouse, girlfriend or boyfriend into working out is futile.

“It starts with yourself; you have to be driven,” he said. “You can’t make someone do something they don’t want to.”

He added that couples who work out together are often successful because they share a common goal; however, meeting up with a workout buddy can fill that need.

Derwald said that he handles food purchases for their household and he and his wife eat the same foods. They only indulge in a dessert if they go out to eat, which is seldom.

These days, it may be a virtual meet-up or app; however, the effect is similar. Phone apps may also assist in weight loss, since they can be used to track movement, lead workouts, record calories and in a sense become more accountable.