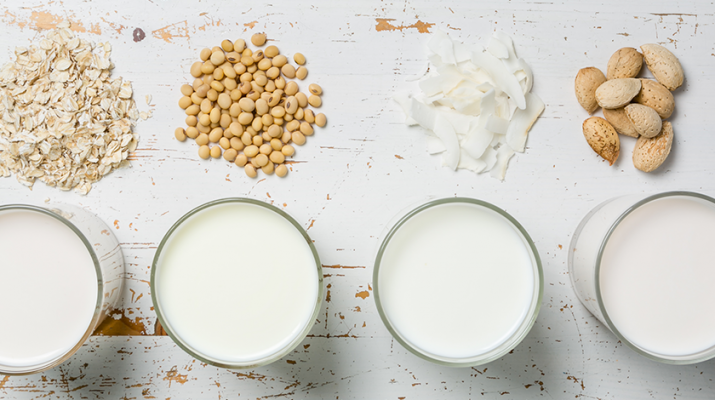 For the past 15 years, plant-based “milk” beverages have offered alternatives to dairy milk, which originates from animals.

While those choosing plant-based beverages may have different reasons for selecting them — including lactose intolerance, allergy to milk protein, vegan lifestyle or concerns about animal welfare — milk offers more nutrition compared with alternative beverages, according to local experts.

“A lot of people don’t consume enough of the right proteins, which you can find in milk,” Gill said. “Even younger, growing children who have higher needs for protein don’t get enough. Milk has been the go-to as a rich source of protein.”

One eight-ounce serving of milk contains eight grams of protein that’s biologically complete so that the body can readily use it.

While plant-based beverages may seem a nutritious choice, they don’t contain the same nutrients as their sources because they’re highly processed. Most of their nutrients come from supplementation. Gill compared them with white breads fortified with folic acid and B vitamins.

“Nutritionally, nuts in and of themselves have some vitamins and minerals and anti-oxidants, but when you look at the processing part of it, depending upon how they’re making it, is their nutrition lost?” Gill said. “From a nutritional standpoint, just eat nuts.”

She also cautioned that some plant-based milks contain preservatives and most are heavily processed. “As a consumer, you have to scour the labels, “she said.

For example, some almond beverages boast they’re made by soaking the nuts in water and pressing them to minimize processing.

Milk includes naturally occurring calcium and also vitamin B-12, which is hard to find in a plant-based food except for nutritional yeast. Nearly every brand of milk is fortified with vitamins A and D.

“Nutritionally, there’s not anything that makes plant-based alternatives more attractive versus milk,” Gill said. “Milk is attractive for the protein and calcium. Even with rice milk, you’re soaking rice but not getting the fiber. It’s a very fortified drink.”

Mary Jo Parker, registered dietitian nutritionist in private practice in Williamsville, said that some have called milk a “nearly perfect food” for its balance of nutrients.

“It’s good for protein and also a wonderful source of minerals,” Parker said. “When we get minerals from animal products, they’re typically better absorbed.”

Among plant-based milk alternatives, rice milk contains less sugar than others but it shouldn’t be consumed exclusively because of the FDA’s warning about the levels of arsenic absorbed by rice.

Coconut alternatives contain little protein but have been touted for improving the metabolism; however, since it contains high levels of saturated fat, it shouldn’t be a go-to milk.

Nut-based beverages do represent good sources of polyunsaturated fats, and are sources of vitamins A and E. Hemp beverages provide omega-3 fatty acids and magnesium.

“The closest to diary milk is soy milk because it has a similar amount of protein to cow milk and has more calcium,” Parker said. “Soy is the one that is closest in biological value to animal protein. It could be beneficial to menopausal women.”

Since many non-dairy milk alternatives contain sweeteners, those looking for the most healthful beverage should look at milk again. It contains no added sugar, unless it’s a flavored milk such as chocolate or strawberry. Milk does contain lactose, which is the natural, inherent sugar that causes problems for those who are lactose intolerant or lactose sensitive.

Plant-based milk: Good option for some

Dana Ingebretson, registered dietitian and director of nutrition services for G-Health Enterprises (GBUAHN/GBUACO) in Buffalo, said that for people who don’t like milk or have an allergy or sensitivity, almond or coconut beverages can provide good options, as well as soy, the closest to milk for nutrients such as protein.

“If I’m looking to get a boost in my meal with milk, I want something with protein,” Ingebretson said.

She said that pea-based alternatives are a good source of protein, but they’re not animal derived so the protein isn’t as usable as the protein found in milk.

US milk is highly regulated for safety concerns. Milk sold commercially must be pasteurized, which kills any bacteria. But before it even leaves the farm, all milk is tested for bacteria and antibiotics. Any batch found contaminated is thrown away, as mandated by law.

Some non-organic farmers use rBST, a synthetic growth hormone, to help cows produce more milk. The hormone is specific to species, meaning it doesn’t affect humans drinking the milk. Pasteurization destroys 90 percent of any traces of the hormone present in milk and the rest is broken down during digestion.

The Food and Drug Administration has deemed the use of rBST with dairy cattle as safe and their stance has been approved by  National Institutes of Health, World Health Organization/Food and Agriculture Organization and American Medical Association.

“When I think about milk, think about how I want to use it in my life,” Ingebretson said. “I want to use it with a whole food like oatmeal or a whole grain cereal. Or perhaps in a smoothie with fruits and vegetables. I don’t worry too much about the milk. Choose milks that are less processed and have less additives. Choose the milk that fits your health concerns and goals.”