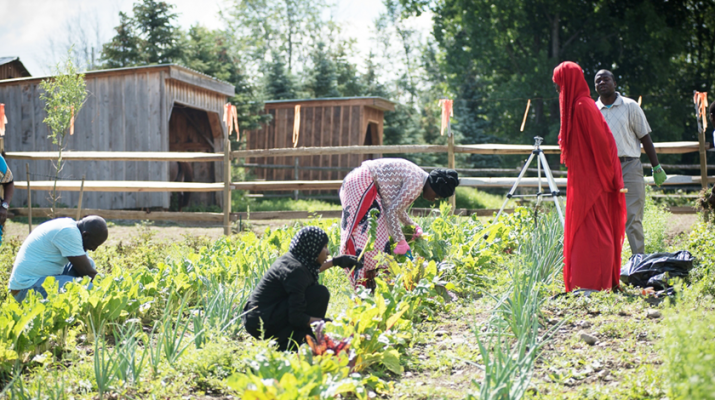 Sometimes, your problem can become another person’s solution as physician Christopher Kerr learned some time ago.

A group of Somboli Bantu refugees in Buffalo’s Westside wanted to farm as they did in their former homeland, Somalia.

Kerr, the CEO of the Center for Hospice and Palliative Care, didn’t have time to do as much as he would like with his farmland in East Aurora.

“Then this came up,” Kerr said simply.

He heard about the refugees’ need to farm through a friend who was teaching English to the group. More than anything, the refugees wanted to farm. Living in Buffalo did not offer them any opportunity to do so.

For the past three years, Kerr’s former horse paddocks serve as a community farming space that provides hundreds of Somboli Bantu refugees with an area to plant vegetables and raise flowers. This provides fresh foods for their families and a source of income through selling excess produce and the flowers. The project has grown to include six acres on Kerr’s property.

Kerr has owned the 30 acres of land for 20 years and with his daughter Bobbi operated a horse boarding and training business. Since she’s been traveling more in recent years as a professional rider, Kerr felt he needed to scale back on horses and use the land differently. He views his partnership with the Somali Bantu as the ideal solution.

“Their roots are as farmers,” Kerr said of the Somboli Bantu people. “It reconnects them to what they’ve always known and allows them to pass on the skills they have to the next generation. It’s wonderful. It gets them out of the city. We’re going to blow this up.”

“They’re taken from everything they know,” Kerr said. “As much as it’s hard to assimilate, it’s nice to see them share in something they know. Its profoundly meaningful. It requires so little from me. They need so little land to produce so much.”

The group grows produce organically, using the farm’s pond to irrigate the crops.

Donations and grants from groups like United Way, Erie County and General Mills have helped the group buy trucks, trailers and equipment.

Kerr plans to form a nonprofit and bring other organizations in to fund both expansion and better infrastructure for growing vegetables, such as deer fencing, irrigation systems and plowing equipment.

“I think I’m very fortunate to live on a farm and it’s profoundly meaningful to share it,” Kerr said. “I can’t think of a better use.”

He also admires how hard-working the refugees are, as well as their knowledge of vegetable farming, which he lacked. He helps out when he can and supplies plenty of horse manure from the boarding business, but the scores of refugees who show up supply the sweat equity.

“It’s a small gift to get them land if they’re willing to work their tails off to make it work,” Kerr said. “It’s a huge joy to watch.”

One family includes four generations of women who work together.

The group sells garlic and cut flowers at the East Aurora Co-Op Market and Roswell Park Farmers Market, and vegetables and African crops at the organization’s Grant Street office throughout the summer. Somali Bantu Community Farm Compost Tea is for sale at Masterson’s Garden Center in East Aurora and Seneca Greenhouse in Elma.

Kerr is looking into adding laying hens and has purchased three more acres to expand the project to more groups.