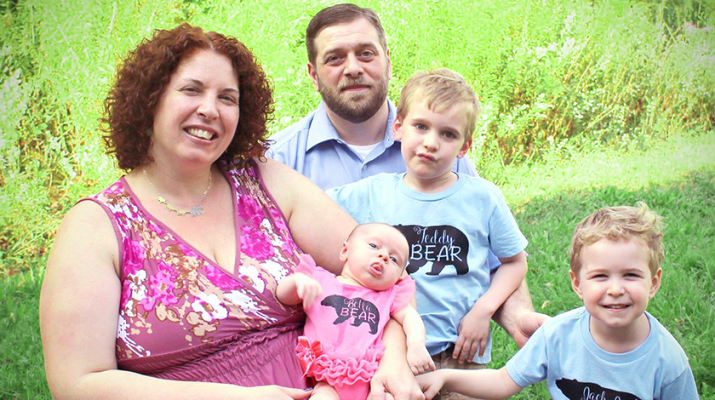 Raising a child on the autism spectrum is not always easy.

What she also knows, however, is it can be a beautiful and rewarding experience.

“Our house is literally a three-ring circus, and I say that endearingly,” she said. “Everyone that comes to our house knows that you’ve got to be ready for some chaos.”

LaMonte-DeGolier’s eldest son, Teddy, is autistic. He recently celebrated his sixth birthday, marking roughly four and a half years since his mom and dad, Ted DeGolier, learned that their son was not neuro-typical.

For the first year of Teddy’s life, the then first-time parents did not notice anything atypical about their son.

“He was developing very typically until he was about 12 months,” she said. “He was walking and had about 50 words. From about 12 to 15 months, we saw that he was kind of turning inward. By 15 months, he was silent. He became more withdrawn; he’d play in the corner by himself. He used to not acknowledge my husband when he came home. It was really hard.”

Teddy has what is known as regressive autism and is considered to be in the moderate-to-severe realm. Not all children with autism will experience a similar timeline of events. Some will demonstrate delayed development of motor skills or sensory issues from the beginning.

Autism spectrum disorder refers to a group of complex neurodevelopment disorders characterized by repetitive and characteristic patterns of behavior and difficulties with social communication and interaction.

The symptoms are present from early childhood and affect daily functioning, according to the National Institute of Neurological Disorders and Stroke. “The term ‘spectrum’ refers to the wide range of symptoms, skills, and levels of disability in functioning that can occur in people with ASD. Some children and adults with ASD are fully able to perform all activities of daily living while others require substantial support to perform basic activities,” states the institute.

The young family was living in California when their first son was born, away from family and friends. The experience was a challenging one, as their baby was colicky, or at least that’s what they thought.

“We didn’t know what parenthood was going to be like. He pretty much screamed for the first six months of his life and had to be in motion all of the time,” remembered LaMonte-DeGolier. “But we could play the theme song from ‘Dr. Who’ and he would instantly stop crying.”

In retrospect, that may have been related to his autism, but as most first-time parents will openly admit, it’s impossible to know what to expect from such a new and daunting experience.

When Teddy was 3 months old, the trio moved back to Western New York and a simple play date changed the course of the family’s future.

LaMonte-DeGolier was spending time with a childhood friend and her children when a difficult subject was broached. There was something on her friend’s mind, but she didn’t want to be upsetting.

“She said, ‘I think you need to call early intervention for Teddy. I think there’s something going on with him,’” recalled LaMonte-DeGolier. “When she said that, I was kind of awestruck, and I was really grateful.”

Teddy was 15 months old when the conversation and resulting evaluation took place. By the time he was 18 months, he had a formal diagnosis and a bevy of professionals ready to help.

“I just jumped in with both feet and within a month and a half of him being evaluated, he was in 23 hours of therapy a week and we just went full immersion,” she said.

Teddy’s week includes speech, occupational and physical therapy and a traveling special education teacher. He is also a participant in a medical trial based in North Carolina.

The hectic schedule is made busier by the fact that Teddy is now the older brother of Jack, 4, and Bella, 1.

Both of the other children seem to be neuro-typical, and although statistics vary, it is commonly accepted that children with an older sibling on the spectrum are more likely to be diagnosed. Boys are also significantly more likely to be autistic than girls.

When LaMonte-DeGolier was pregnant with her middle child, Teddy had not yet been diagnosed, and that was a bit of a blessing.

“It was a different pregnancy with Bella,” she said. “It’s a heavy thing.”

Although Jack does not appear to be on the spectrum, autism is just a part of life and family for the young boy.

Jack has attended countless therapy sessions. He is often shown as an example of typical social behaviors for his brother and has made many concessions over his young life to help accommodate the needs of his big brother.

It isn’t always easy for Jack or for his parents, but they work as a team to make sure that everyone gets what they need.

“We have a saying in our family that no one gets left behind,” LaMonte-DeGolier said. “So we work together constantly. I’m so grateful that Jack is a kind, caring and compassionate individual.”

The road has not always been easy, but the payoffs have been immensely rewarding.

Teddy participates in a double blind medical trial being conducted at Duke University in Durham, N.C. By chance, his parents decided to bank his umbilical cord blood when he was born, due to medical challenges his mom had faced when she was young. That would later be one of many things that allowed him to be eligible for the trial.

“It was really just fate,” said LaMonte-DeGolier. “He’s in phase two of the trial and they’re entering phase three and it has changed his path in life. August was the last month of the program and the changes we’ve seen this year have been nothing short of a miracle.”

Nothing is perfect, and it has taken many years to make the strides, but for Teddy’s mom, it’s more than worth it.

While Teddy was once non-verbal, he can now communicate orally, although it sometimes takes a couple of tries and a lot of concentration.

“He’s not a fluent speaker, but he can get the point across if you pay attention to him,” said his mom.
His social interactions have improved as well.

“When you walk in your son’s room and he says, ‘Hi, Dada’ for the first time or walks over to his brother and starts playing with him, I still get a little weepy sometimes, because we didn’t know if that was ever going to happen,” she said.

LaMonte-DeGolier has taken her experience, with all of its many highs and lows, and decided to help other parents of children with special needs by starting a support group in her community of Akron. The support of family and friends has let the family “stay functional,” she said.

A diagnosis can be difficult for a parent to hear and adjust to, as she knows. A poem she often shares titled, “Welcome to Holland,” describes the experience as being akin to planning a fabulous trip to Italy, only to disembark in Holland. It is not what was expected.

You will have to adjust. The dream will change and there will be disappointments. But there will be beautiful experiences — tulips and windmills — and the journey will not be a lesser one, only different.

Sharing her family’s story and helping others is a path that LaMonte-DeGolier has chosen and is happy to be on.

“This is who we are, and we’re not ashamed of it,” she said. “We embrace Teddy for his uniqueness. He has been my greatest teacher. He has changed my perspective of the world. He has made me more compassionate and more caring, and he has taught me to find awe and inspiration in the smallest of things. Everything is celebrated around here. We don’t squander the small moments in this family.”