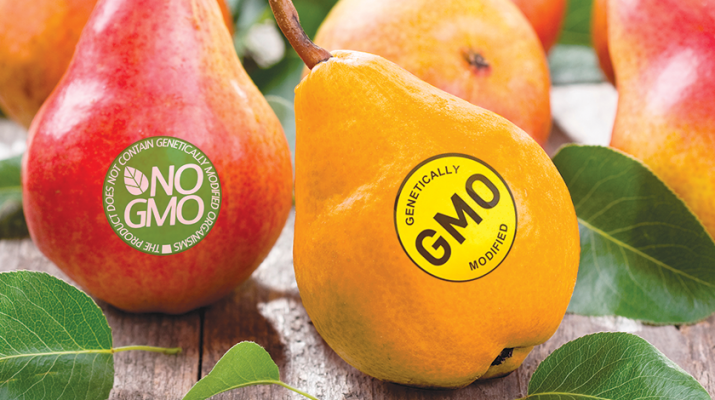 But it seems that the measure doesn’t please either those who support or denounce the use of GMOs.

Many critics of GMOs believe the labeling is inadequate since food packers and manufacturers need only include wording about the GMO ingredients, a QR code or a toll-free phone number to access more facts. In the latter two labeling types, consumers must seek the information themselves.

Isaac Marcuson, sales associate with the Feel Rite Fresh Markets location in Buffalo, said that the labels should be “more informative” for consumers.

A part of the American diet since 1996, genetically modified foods are from plants that have been grown from seeds with altered DNA. The changes help plants resist pests, promote positive traits (such as non-browning apples), and resist herbicides used around crops.

With only about 20 years of research on the effects of consuming these foods, Marcuson is not convinced of their safety. In fact, he stated that the “unforeseen consequences” of genetically engineered food is what worries natural health experts the most.

He also believes that genetically engineered foods aren’t as successful as they have been touted.

“Some time, it could come to a point where it will increase nutrition or yield, but we’re not seeing that so far,” Marcuson said. “So far,  we’re seeing detriments to people’s health.”

He blames over use of Roundup, a commonly used herbicide, as one reason he believes genetically engineered crops harm people. He said that some crops genetically modified to resist herbicide are “drenched with Roundup.”

Roundup is “is one of the most mild herbicides. You can buy it at Wal-Mart and put it on your driveway.”

But as for over-using herbicide or engaging in off-label use, Ammerman said that’s unlikely since farmers try to reduce their overhead as much as possible and herbicide costs them money.

He believes that genetically engineering is a safe way to grow food.

“There have been more than 2,000 studies that have shown there’s no greater risk to human health to crops grown with genetic engineering than those traditionally bred,” he said. “The National Academies of Science has released a study. It was a very wide-reaching analysis of the information and it supported what an overwhelming number of scientists believe. It spoke a lot to the safety of GMO crops.”

Available at https://nas-sites.org/ge-crops, the study stated that only about 12 percent of the world’s farmland is planted to genetically engineered crops. Few crops are predominately available and widely planted as genetically engineered. They include soybeans, cotton, corn, and canola. Sugar beets, summer squash and papaya aren’t as widespread. A few other crops, such as non-browning apples and potatoes, are still pretty rare as genetically modified types.

Ammerman said that labeling foods as containing or not containing genetically engineered ingredients can lead consumer to think that “GMO” means “unsafe.”

“That’s been a concern of agriculture for quite some time,” Ammerman said. “A mandatory GMO label is seen as a skull and crossbones. There has been a lot of misinformation. There has been fear bred in consumers.”

He added that some foods that have never been available as genetically engineered are now being billed as “GMO-free” which he believes is misleading.

“It’s marketing and trying to take advantage of the trend of the moment and some consumer bias one way or another,” Ammerman said. “It’s like ‘fat-free’ or ‘natural’ or ‘gluten-free.’”

But farmers can choose non-GMO seeds if they wish.

“Farmers have a choice,” Ammerman said. “Most corn grown is GMO, but there is non-GMO corn available that you can plant for organic or conventional use.”

He views genetically engineered seeds as helping farmers cope with environmental fluctuations and challenges of areas stricken with drought or other problems.

Mark R. O’Brian, PhD, professor and chairman of the department of biochemistry at University at Buffalo, stated, “Scientific evidence supports the conclusion that food derived from genetically-engineered organisms is equivalent to their traditional counterparts in terms of nutritional quality, allergenicity and toxicity.

“Genetically-engineered foods have been consumed for over 20 years, and no adverse consequences have been substantiated in peer-reviewed literature. The conclusion that food derived from genetically-engineered organisms is safe is supported by the National Academy of Sciences, the American Medical Association, and the World Health Organization.”