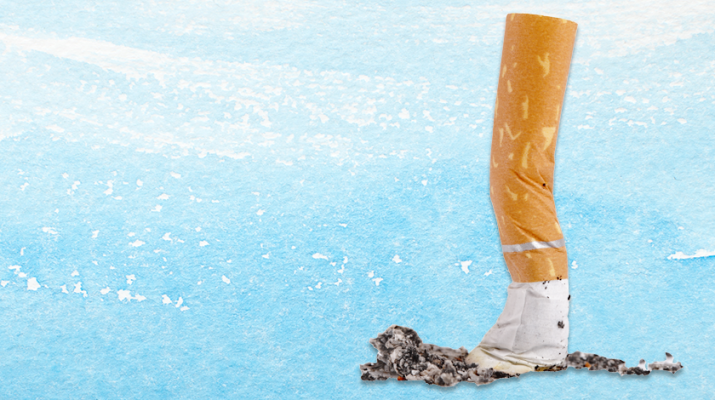 Do you think that because you’re in your 50s, 60s, 70s — or beyond — that it’s too late to quit smoking? Have you tried and failed so many times over the years that you believe it’s a hopeless venture? Do you tell yourself you’ve smoked so long it won’t make any difference?

Over the past few decades as a smoker, I’ve felt all of those things and then some. I’ve rationalized many times all the excuses why I shouldn’t even bother attempting to quit. But three and a half years ago, I decided to try one more time, and I’ve been a non-smoker ever since.

I realize now that all that rationalizing was just more excuses. And, believe me, I know all about excuses because I smoked for the better part of 40 years and gave myself every reason in the book why I couldn’t or wouldn’t or shouldn’t stop.

Even the on-again, off-again health scares weren’t enough to convince me: Not the annual bouts of pneumonia or bronchitis that became ever more debilitating as I aged. Not the chest X-ray six years ago showing “dark spots” on my lungs, and not the eventual diagnosis of early-stage emphysema. Not even the untimely (and most likely preventable) death of my beloved mother, who smoked for 60-plus years and suffered with chronic obstructive pulmonary disease, could convince me to stop.

I thought constantly about quitting (don’t we all?), especially in 2013 when I plopped $9.70 on a store counter for my daily fix of Marlboro Lights in a box.

When I reached my 60s, I also began to think a lot about my mortality and the time I had left. I knew that smoking a pack a day, or sometimes more, wasn’t going to help me live longer, and I often played that public service announcement in my head, the one that ends with, “It’s never too late to stop.”

The encouraging news I’d like to share is that trying to quit as a senior citizen turned out to be quite different from all those attempts in my younger years. For starters, I was retired. Although I still work from home and my retirement is an active one, when push comes to shove, I’m pretty much the one who controls the content of my days.
Unlike in the past, if the cravings got to be too much I could close the blinds, lock the doors and spend the day in bed or on the couch watching television. If I needed to get away from my regular routine — something that’s extremely important when you’re trying to quit — I could go to the movies at 11 o›clock in the morning. I could lose myself in a museum or the shelves of a library or bookstore until the madness passed. I could walk around the block anytime I needed to get out. I could do whatever it took to survive the desperate pangs of withdrawal, especially during those first seven days, which are so crucial to success. When we are working full-time, those options are not generally available to us and it’s easy to fall prey to the stresses of confinement.

Another thing that was different this time is that I had a prescription for Chantix, a relatively new drug that helps significantly with cravings. Yes, I read all the warnings about the possibility of nightmares and other uncomfortable or dangerous side effects. But if you read the fine print on just about any effective drug these days, those warnings are equally frightening. I was fortunate; I used Chantix faithfully for six months and suffered no ill effects. The only change in my dreams was that I began to dream in color, which was a rather pleasant experience.

I was also helped by using Nicorette gum, starting with 4 mg pieces and eventually reducing the dosage to 2 mg. That, too, was a different experience from years past. The original (and the only nicotine gum available at the time) was quite distasteful. Today, the flavors include White Ice Mint, Fruit Chill, Cinnamon Surge and Fresh Mint, to name a few. All are far more palatable than the original, and they are also a great help with cravings.

Those things, combined with the best tricks I learned over the years to fight the urges, have resulted in more than three smoke-free years. Drink lots of water, treat yourself in some way every day, change up your routine, avoid the “triggers,” those activities you associate with smoking. If you always have a cup of coffee at the kitchen table with your first cigarette of the day, take your coffee elsewhere. If you always smoke when you’re sitting at the computer, use a library’s computers for a few weeks. Shake things up; it really helps to break the grip of nicotine.

I recently saw a pulmonary specialist and underwent a series of tests, and I was told there are no longer signs of chronic obstructive pulmonary disease. The shortness of breath I was experiencing has lessened, and I am sleeping better than I have in years. While I still take medication for high blood pressure, it is now consistently lower than it has been in many years. I’m also saving more than$ 3,500 a year by not buying those Marlboro Lights every day, and that’s a big help when you’re living on a modest fixed income.

Sure, there are times I miss smoking, and I probably always will. But those thoughts are just thoughts, not cravings, and they pass quickly as I remind myself how much healthier I’ve become in just a few, short years.

Let’s face it, being a smoker these days is embarrassing, not to mention it has become almost impossible to find public places where it’s legal to smoke.

So why not give quitting one more try? Now that you’re older, I think you’ll be pleasantly surprised at the difference. And what a difference it will make in your life.