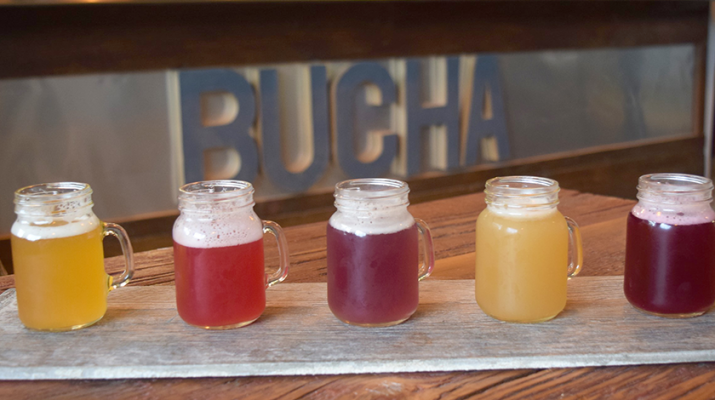 In 2015, kombucha brewing had yet to be regulated in New York state. The fermented tea drink had begun gaining popularity nationwide and Jeff Empric, Heather Lucas and Todd Salansky believed in the health benefits of the beverage. The trio decided to begin brewing and Bootleg Bucha was born.

The beverage has been known by a number of somewhat outlandish names throughout the years — including “The elixir of life” — and some fans claim that it has extraordinary health benefits, including the ability to battle cancer.

A quick internet search of the refreshment will turn up proponents who espouse the belief that the drink — the origins of which are not entirely clear but are commonly believed to be hundreds, if not thousands of years in the past — can cure everything from sweaty feet and thinning hair to cataracts and even AIDS.

These claims, however, lack the support of scientific evidence, according to the National Center for Complementary and Integrative Health.

That being said, the fizzy drink that seems to be one of the trendiest health foods on the market is far from being without merit.

While it may not be the beverage to cure all that ails, the brewing process imbues it with characteristics that may well be linked to improved gut health. In order to create the drink, a symbiotic culture of bacteria and yeast, or SCOBY, is added to the mixture of tea, sugar and water and left to ferment for between two and four weeks.

Before opening Bootleg Bucha, both Empric and Salansky suffered from intestinal issues and say that their gut health was greatly improved by kombucha.

That may be because the result of the fermentation process is that the beverage is infused with probiotics. According to the Mayo Clinic, there is evidence to suggest that probiotics might help treat diarrhea, irritable bowel syndrome, speed the treatment of certain intestinal infections, prevent or reduce the severity of colds and flu and ease allergic disorders such as eczema and hay fever.

“It’s the good bacteria that balances your gut, helps you process your food, gain the nutrients you need and keep your gut in check,” said Empric.

Kombucha also provides an alternative path to probiotic intake for those who are dairy-free, as yogurt is one of the most common sources.

Whether or not you’re headed to the cooler to even out your stomach, kombucha certainly serves as a healthier alternative to many other drinks on the shelf.

At Bootleg Bocha, all-natural flavoring is used for the variety of flavors from Apple Spice to Butterfly Pea Tea with Lemon Lavender. The brewery is also largely organic and plans to be entirely organic by 2018. Sugar is used but in moderation, according to the business owners.

“Sugar is needed for the fermentation process and in the weeks that it’s fermenting, a lot of that sugar will ferment out,” said Lucas. “We don’t add any additional sugar. All we add is fruit juices and herbs.”

According to Salansky, an 8 ounce glass of Bootleg’s kombucha will average between 5 and 8 grams of sugar, compared to an 8 ounce full-flavor pop, which averages between 25 and 30 grams.

Additionally, the drink is free of chemical additives and preservatives which pervade many grocery store shelves.

“It started in, I’d say, the late ‘50s or early ‘60s when you started getting away from a lot of the farm-to-table foods and shifting to the FDA safe food stream, and the instant way to do it was chemicals,” said Empric. “It’s on the food and it’s in the food to prevent bacteria growth, so it’s going to alter your gut bacteria.”

For Empric, the benefit is in the move back to basics.

“There can be a fear of not having a preservative,” he said. “It’s a mindset change, but this is the way food was always made.”

Bootleg Bucha is located at 1250 Niagara St. For more information, visit their website at http://bootlegbucha.com.