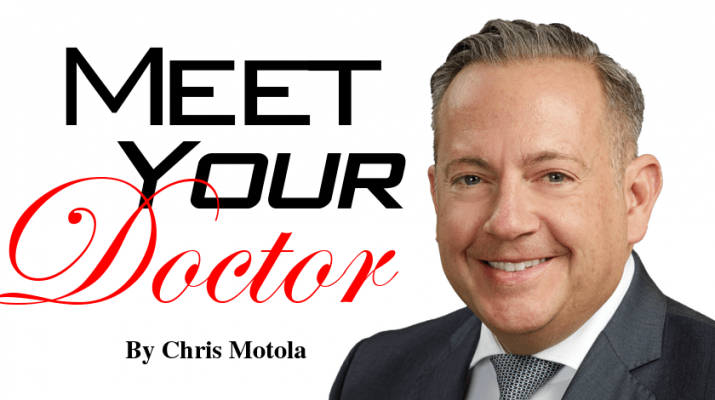 Q: What’s your relationship with General Physician PC and UBMD?

A: I joined General Physician, PC in partnership with UBMD on April 1st. I’d been with Buffalo MedicalGroup for about 14 years. I joined basically because of the excitement in the surgery world centered around Kaleida and some of the advances there. I’ve been around medicine in Buffalo my whole life and this is one of the most exciting times I’ve lived through here. My dad’s been a cardiologist at Buffalo General for about 42 years, probably more than that.

Q: What attracted you to the group?

A: My work is as a colorectal surgeon, exclusively. One of the things that attracted me to the new group is that they’re a little more progressive. My prime focus in terms of colon surgery is robotic. I believe we do the highest volume of da Vinci robotic colon surgeries west of New York City within the state. That’s kind of the future of colon surgery. The advantages are tremendous. It took me a long time to adopt it, but over the past few years, we’ve seen huge advances in robotic colon surgery. And what it means for patients is enormous.

Q: What are some of the advantages?

A. I grew up at a time when it was about half-open, half-laparoscopic. Laparoscopic was obviously a huge advance in colon surgery in that your recovery time is about half of what it is for open. There are fewer complications and you’re back to doing your normal activities in a much shorter period of time. Robotic surgery has done the same thing for laparoscopy that laparoscopy did for open surgery. A patient with typical colon I did with a laparoscopic approach probably five or six years ago stayed in the hospital three to four days. With robotic surgery that’s down to 24 to 36 hours for major colon surgeries and you’re back to work in three to four weeks instead of four to six weeks. It’s kind of exciting to see the progression. Practicing in a partnership with General Physician, PC and UBMD has allowed me more opportunities than you would typically get in private practice. You get to interact with the residents and fellows and keep your skill set up.

Q: Why is the recovery time shorter?

A: There’s a lot less trauma to the tissues. With laparoscopy, you’re still kind of affecting the belly wall; you’re looking at it two-dimensionally as a surgeon. Whereas here there’s a fixed point in the belly wall where the [da Vinci’s] EndoWrist instruments are working inside as opposed to torquing things from the outside and putting pressure on the abdominal wall. As the surgeon, you’re getting a three dimensional view of what you’re looking at as opposed to two dimensional. Small incisions, less pain, shorter stays, faster recovery.

Q: Are there trade-offs in terms of how you spend your time? Do you plan your approach more methodically or spend time programming the machine’s approach?

A: In terms of operating room time, it’s a little longer, yeah, in terms of setting up the robot. An hour or two-hour laparoscopic approach might take three hours if you do it robotically instead. But the benefits are worth every single second for the reasons I mentioned.

Q: What percentage of colorectal surgeries can be done robotically?

A: Similar to what we can with laparoscopy, so everything but extremely complex surgery or if you’ve had like seven surgeries on your belly. I’d say at least 95 percent of my surgeries are robotic for standard cases. We can also start off robotically, and if it’s not working, we can finish it laparoscopically.

Q: Do both robotic and laparoscopic surgeries use a similar approach, like with catheters?

A: They’re similar, but the da Vinci ones are designed specifically for the robot. The visual, three-dimensional aspect of what we see is a lot different.

Q: Colon cancer screenings have become a much bigger part of patients’ medical lives. What impact have they had on your end?

A: It’s a huge issue these days. You may have heard that there’s a higher incidence [of colon cancer] in people who aren’t currently being screened, between the ages of 40 and 50. Insurance companies aren’t quite up to speed with this. Unless you have a family history or risk factors, the recommended age to start screening has been 50. We don’t know the reasons, but we’re seeing it earlier and a lot of them, because they aren’t being screened, end up pretty advanced by the time we see them. But I do participate in screenings; I probably do 10 to 14 colonoscopies per day. It’s a very preventable, slow-growing tumor that, if you catch it in the early stages, is extremely survivable.

Q: How effective is surgery for this type of cancer?

A: It’s one of the more treatable cancers if you get it at stage I — even stage II and III; it’s not like pancreatic cancer. It’s still a treatable disease. It’s just best to get to it earlier.

Q: Does the da Vinci robot have applications for more mundane procedures?

A: I also do things like hemorrhoids and fissures, but there’s not too much excitement going on there in comparison, but we can actually do lower tumors trans-anally. So, believe it or not, we do dock a $2 million robot to the end of the rectum, which would usually require an abdominal approach. These people are going home the same day. There are some newer robots coming out for endoscopic surgery which are a little different than da Vinci robot, as well as new versions of da Vinci. So being able to endoscopically remove something without a belly incision at all is something we’re going to see in the not-too-distant future.