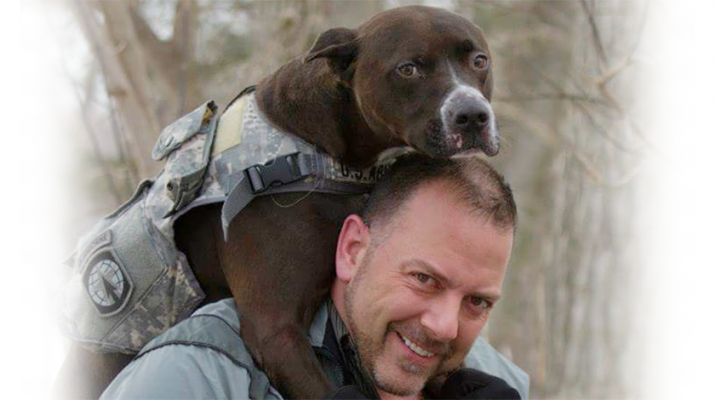 As an infantry staff sergeant in the U.S. Army, 26-year-old Garrett Jackson’s service included two tours of duty in the Nangarhar Province of Afghanistan. He returned home to Western New York with three Army Achievement medals, two Army Commendation medals, two Good Conduct medals — and, like many veterans who have experienced the shock and dangers of war, post-traumatic stress disorder (PTSD).

Defined by the National Institute of Mental Health as “a disorder that develops in some people who have experienced a shocking, scary or dangerous event,” PTSD affects roughly eight million adults during a given year. Many, like Garrett, are veterans who have seen combat and been exposed to horrible and life-threatening experiences and now wrestle with re-entry to civilian life.

“The military changes you from civilian to soldier, but doesn’t change you back from soldier to civilian,” says Jackson, who suffers anxiety attacks in large crowds or when people get too close. “There’s no way to ‘unsee’ what you’ve seen, making returning home to civilian life a huge adjustment.”

It was Garrett’s dad who suggested Garrett look in to a local organization called WNY Heroes. His friend, Chris Kreiger, started the 501c3 nonprofit organization as a result of his own experiences during a decade of service in the U.S. military.

The organization provides veterans, members of the armed services and the widows and children of deceased veterans with access to essential services, financial assistance and resources that support their lives and sustain their dignity.

In 2014, WNY Heroes launched its Pawsitive for Heroes program, which pays for service dog training for veterans, thanks to donations from sponsors. The program has benefitted 32 veterans so far — each working with a particular service dog. There is no charge to participate but veterans are responsible for the proper care and feeding of the service dogs.

Garrett had been given a chocolate Labrador retriever by a friend and, after hearing about the program, decided he and his now 2-year-old 85 pound dog would enroll.

“The program has been a huge help to me,” says Garrett. “My dog now senses when I am anxious and will grab my attention by rubbing against me, pawing me or barking. It refocuses me immediately and calms me down. My dog grounds me — he’s been my savior, and his loyalty is unmatched.”

“Service dogs are trained to sense the stress, anxiety and hypervigilance typical with PTSD and will distract their handler, forcing their attention to the dog, which immediately relaxes the vet, changes his focus and calms him down,” says Lynn Magistrale, program coordinator for WNY Heroes and an Iraq War veteran.

Magistrale says a service dog differs from a therapy dog in that therapy dogs serve a wider audience — such as groups of seniors in nursing homes or children in hospitals — but a service dog is focused solely on his handler. And, in the case of WNY Heroes’ Pawsitive for Heroes program, the handlers are all veterans.

“We use certified trainers for our program who share our beliefs and who are specifically trained for service dog training,” says Magistrale.

“The breed doesn’t matter as much as the characteristics of a particular dog,” says Magistrale. “It must meet certain requirements. Pit bulls have been very successful in the program as they train well, serve well and are highly intelligent, so they catch on fast and are very obedient.

“So our program not only helps veterans, but also provides good homes for shelter dogs,” she adds.

Veterans who qualify can enter the program with their own dog, as Garrett did — assuming the dog adapts well to the program — or can be matched with a dog. Both dog and handler start with eight weeks of one- to two-hour weekly training sessions for the first level of training, advancing from there. Handlers and dogs then continuously take refresher training courses and attend special gatherings organized by WNY Heroes to help them both maneuver the day-to-day world.

Under the Americans with Disabilities Act (ADA), state and local governments, businesses and nonprofit organizations that serve the public generally must allow service animals to accompany people with disabilities in all areas of the facilities where the public is normally allowed to go. When someone enters a public place with a service dog, there are only two questions that can legally be asked: “Is the dog a service animal required because of a disability?” and “What work or task has the dog been trained to perform?” Staff cannot ask about the person’s disability, require medical documentation, special ID card or training documentation for the dog, or ask that the dog demonstrate its ability to perform the work or task.

“When you see a dog wearing a service dog vest, don’t ask to pet it, ask its name or try to engage the dog in any way,” advises Magistrale. “The dog is doing a job, performing a vital service for someone in need. Its focus needs to be solely on its handler, with no distractions.”

“Pawsitive for Heroes offers a much better way of dealing with my PTSD than being on medication,” says Jackson. “I don’t know where I’d be if this program didn’t exist. My dog goes everywhere with me, and I’m much more comfortable in large groups and in day-to-day life now, thanks to him and WNY Heroes.”

For more information on WNY Heroes or the Pawsitive for Heroes program, visit wnyheroes.org or call 716-630-5020.