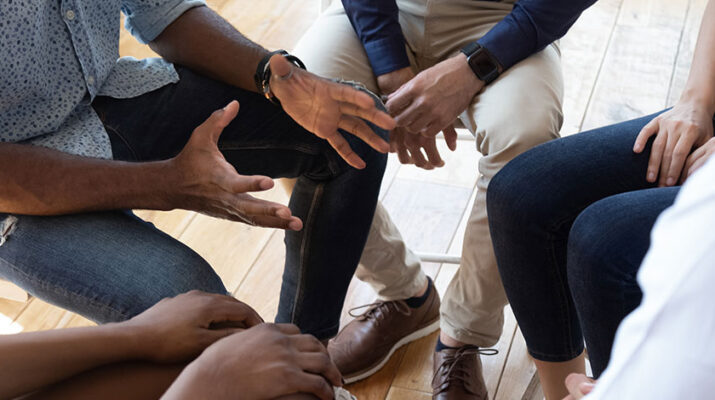 Brian Costello, licensed master social worker and credentialed alcohol and substance abuse counselor, saw a need for a space where men could connect with other men as well as to learn and grow psychologically and emotionally. This led him to the creation of Let’s Talk, a men’s group which aims to give the participants room to do just that.

Prior to going into private practice at Core Mental Health Counseling, located at 374 Delaware Ave., Buffalo, Costello worked in the field of addiction therapy, where he noted his primary clientele was men.

“I’ve also sat in on men’s circles for personal development and I have gained too much for words,” he said. “There are such benefits to sitting with other men who have learned how to sit with their own emotions and experiences and process that.”

Costello noted that even in his field, the majority of providers tend to be female, leaving sparse room for men who may be more comfortable seeking assistance from a male provider.

The men’s group that Costello established recently concluded its first six-week session which was held virtually, and he says he hopes to begin another session in the future, providing more men a space to learn and grow and to simply bond with other men.

“Primarily, it’s about connection, to normalize that despite outward appearances, other guys struggle with anxiety, fear, depression, relationship struggles, loneliness, kind of the whole gamut of human emotion and it’s just never really talked about with men, especially the intimate details of their lives, its not always discussed,” he said.

Costello noted that there are many reasons why men are often times less likely to seek out help and support when it comes to mental and emotional wellness issues, one of which is a stigma which exists around the issue. This can lead, he said, to men letting issues go for far too long.

“It’s changing, but it has been typical that when I see a guy in my office, he’s already in crisis, the wheels are falling off,” he said.

The therapist noted that seeking counseling is anything but a sign that a man is somehow falling short.

Additionally, Costello noted that men are more prone to focusing on external issues surrounding them rather than the personal internal response to things they may be experiencing.

“Guys tend to intellectualize emotion a little bit, as though it’s a problem or a puzzle that has a solution,” he said.

While participants do delve into some weighty emotional topics, the group is also geared at looking forward and outward, in addition to inward. Costello describes the group as a hybrid of personal development and group therapy.

Costello said that the sessions feature a range of topics through the six-week time frame and a typical session can include educational material, mindfulness and meditation, goal setting, accountability activities, exercises such as writing or journaling, book reviews and group conversations and check-ins.

While this session is over, Costello said that he hopes to begin another and also hopes to help others through social media accounts which provide information as well as encouragement.