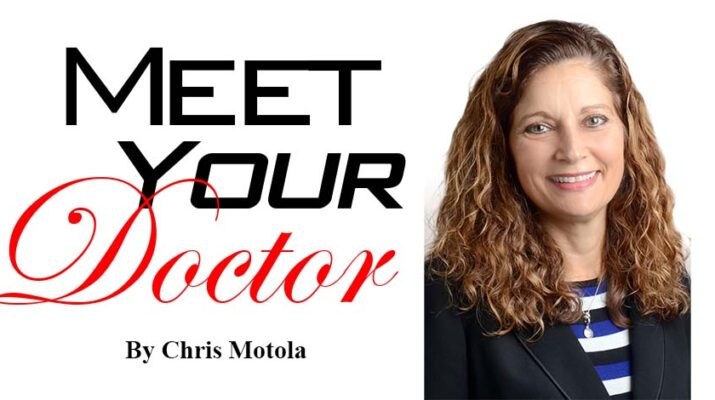 Local OB-GYN counts as one of her roles to teach medical students and residents. She is one of the few specializing in pediatric and adolescent gynecology

Q: Give us a rundown of what your OB-GYN practice looks like.

A: I’m an OB-GYN, so I see patients of all ages for their women’s reproductive health issues, as well as doing general preventive care for women. I’m not an internist or a family practice doctor, so I’m not managing their thyroids, diabetes or migraines. But I definitely do comprehensive care for patients and make sure that their gynecologic and reproductive needs are being met. I’m also a pediatric and adolescent gynecologist, which is kind of an unusual practice that not too many people are trained in. So I do see and consult for ages ranging from birth through adolescence. Most people are surprised to hear that children can have gynecologic problems, but they certainly can.

Q: What sorts of gynecologic problems might children and teens have?

A: Anything from being born with an atypical reproductive tract, to obstructions, to things that shouldn’t be growing there. Pathology of their reproductive organs, infections, irritations. And as they get older it might include things like delayed or early puberty. In the teenage years it might be irregular periods that signal that there’s some kind of other underlying issue that needs to be taken care of. And, of course, issues that you also see in adults like ovarian cysts, pelvic pains, STD complications and sexuality issues in general.

Q: So for juvenile patients you’re generally seeing them for acute issues rather than routinely?

A: It all depends. I work as a consultant for kids who have a specific problem. Sometimes those kids have long-term problems that need to be followed over time. If a kid has a congenital problem, an atypical development over their reproductive tract, I might give advice about everything from how to control their bleeding problems to how to prevent future problems. How to normalize their reproductive lives, their menstrual flow, their pain. And also their reproductive capacity and how we can preserve that if they want to have kids down the road. So, they may be seen initially and then be seen regularly for follow-up after that. Other times it’s a one-time thing and they don’t need to be seen for years and years. We do recommend that adolescents get seen earlier rather than later. Sometimes they need help with concerns about puberty. We can help with education and giving them advanced warning about pregnancy and STD risks. And it gets them comfortable with us so that, when the time comes, they’re comfortable coming to see us with any issues that arise.

Q: Do you also see adults?

A: Yes. I see adults all the way up to elderly patients. I very much enjoy seeing menopausal women. Because of my interests in the endocrine system, I enjoy helping them with menopause and the problems that can sometimes go along with that. I also treat a lot of irregular bleeding that can occur in any age group. That’s another one of my specialties.

Q: What are the typical causes of spotting and abnormal bleeding?

A: It varies so much. It can be anything from a pathology like something growing in the uterus like a fibroid — hopefully it’s never something like endometrial cancer, cancer of the uterus. So sometimes there’s a pathology that needs to be removed. But a lot of times it’s something to do with the systems that control cycles. There are things that can affect the brain, the hypothalamus and the pituitary, which are the parts of the brain that control when periods come. So when there’s something wrong in those areas like thyroid abnormalities or they’re making too much prolactin hormone or sometimes even just under-eating and over-exercising. Sometimes your nutritional status can affect the periods quite a bit. Genetic problems can surface and cause problems. These things tend to lead to irregularity. So instead of coming every 28 or 30 days, it can become quite irregular.

Q: Does that introduce complications for women who are trying to lose weight or otherwise introduce a substantial lifestyle modification?

A: It’s almost more the reverse. Sometimes people who are very heavyset may find it may influence whether their periods come regularly or not. Being very underweight can also affect it, or if they’re undergoing a dramatic weight loss. That can signal to the brain that the period needs to be put on hold because the body isn’t ready. Over-exercising to the point where you’re not getting the nutritional calories can certainly also influence it.

Q: Have you found that patients put off a lot of OB-GYN care over the past two years?

A: I think it’s true that people did put off being seen for a while due to COVID-19, so if it wasn’t urgent people weren’t coming in as much. Luckily with Pap smears in general, which is a cervical screening test, we can actually space those tests. We used to have to do those yearly, but they can be as far apart as three to five years now depending on age. But breast cancer screenings, mammograms, those are annual things, and people weren’t coming in for those. I was just reading yesterday that sexually transmitted infection testing went way down. And unfortunately you have to treat those quickly before they get spread around. A lot of that wasn’t being done frequently.

Q: You’re also quite involved in the educational aspects of medicine.