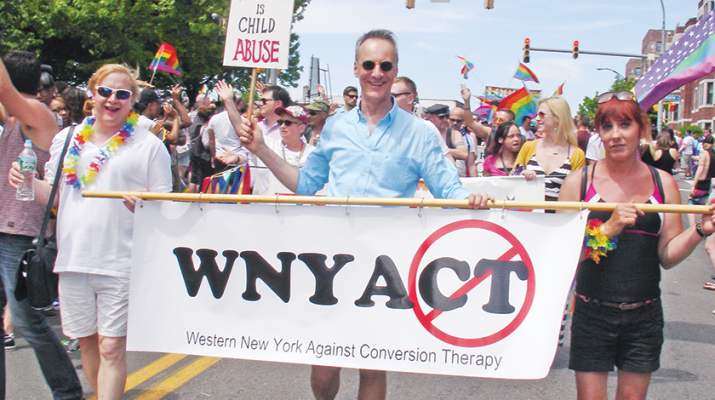 When the 2016 Republican National Committee’s proposed platform was released in July, national attention was immediately drawn to a line that explicitly defended a controversial practice that’s commonly known as conversion therapy.

There is no standard approach to conversion therapy, because it has been discredited by practically every major medical group, including the World Health Organization, American Medical Association and American Psychiatric Association.

“The almost unanimous consensus among medical organizations in the U.S. and across the world is that [conversion therapy] is ineffective at best and harmful at worst,” said Paul Morgan, founder of Western New Yorkers Against Conversion Therapy.

Religious and social conservatives argue that individuals should be free to try and abstain from the homosexual lifestyle. They also say parents should be able to decide whether such therapy is right for their children. (It should be noted that while the final RNC platform does not mention conversion therapy explicitly, it does advocate for a parent’s right to “determine the proposed medical treatment and therapy for their minor children.”)

But a growing body of evidence shows that conversion therapy can be harmful to young people, and several states, including California and New Jersey, have banned the practice for minors.

“If that change [in sexual orientation] doesn’t come about, they’re dealt an enormous psychological blow,” Morgan said. “When you inflict that on children, the effects are magnified.”

Shurka explained that he entered a conversion therapy program after admitting to his father, at age 16, that he had been with boys (as well as girls) and had a crush on a fellow male student.

At his father’s behest, Shurka met with a conversion therapist who told him that his homosexual feelings were caused by some trauma in his past. Although Shurka had never experienced any sort of real trauma to that point in his otherwise normal upbringing, he believed the therapist.

“I was told that because all my urges were a response to my trauma, I would never experience true love,” he said.

Before long, Shurka was committed to becoming straight. He masturbated to heterosexual-oriented pornography. He slept with as many girls as possible. He spent all his time with men, trying to act traditionally masculine, and avoided any kind of platonic communication with women. This even meant not talking to his sisters and his mother, which, of course, caused tension at home.

“All my training, it was all based on stereotypes,” he said.

By the time Shurka enrolled in college, it became increasingly clear that his efforts weren’t working. All the time he was spending around men only increased his homosexual feelings. And while he was still trying to be intimate with women, he was no longer functioning in bed.

By then Shurka was seeing a different therapist (he saw four over five years), and this one responded to his supposed erectile dysfunction by prescribing him Viagra.

“This on so many levels is a violation of what a therapist should do,” Shurka said.

But the continuation of heteronormative behavior only left Shurka totally demoralized. He had been in these programs for about three years now, he had been trying as hard as he could, and yet he didn’t feel any more “normal.”

Like others, Shurka grew increasingly depressed, and over the next two years, he contemplated ending his life.

“All I could think of was how much is wrong with me,” he said.

Shurka, 28, is now an LGBT rights spokesperson and an adviser member of the Born Perfect Campaign. He pushed for Gov. Andrew Cuomo’s February 2016 executive order that barred insurance coverage of conversion therapy for minors — a move that both he and Morgan hailed as an important step in the right direction.

“Anyone concerned with the welfare of children owes the governor a debt of gratitude,” Morgan said.

But both agree it isn’t enough. LGBT rights groups are pushing for a ban on conversion therapy for minors at both the state and federal level, but have encountered opposition from Republican lawmakers.

A 2014 bill to ban the practice for children passed the New York State Assembly, which has a Democratic majority, but stalled in the Republican-led Senate. It has yet to be taken up for a vote.

In the meantime, Morgan and Shurka will continue to try and raise awareness of the psychological harm that conversion therapy can do to young people. As Shurka himself learned, growing up as an LGBT person is difficult enough; but with parents who don’t support your sexual orientation, this time can be a nightmare.

“If the parents are supportive of their child, it makes such a difference,” Shurka said.