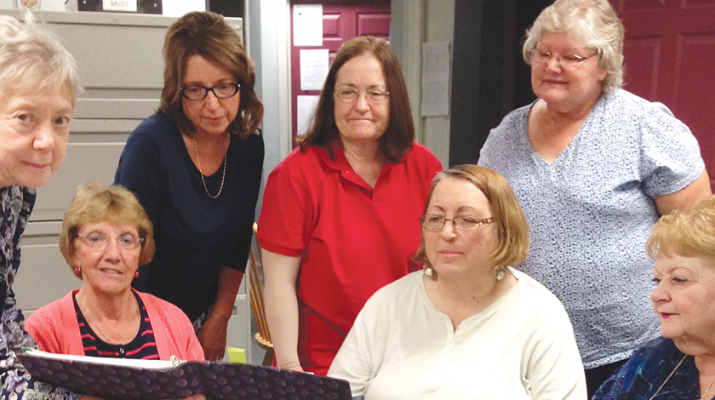 Williamsville resident Joanne Coury had chemotherapy in 2013 and two months later was living with secondary lymphedema.

“I was so frustrated there’s no real cure, and I realized there could be people in Buffalo equally as frustrated,” said Coury, who in April ounded WNY Women’s Lymphedema Support Group, which is open to women of all ages and their caregivers.

People living with lymphedema tend to hide the symptoms — the constant swelling that occurs in different parts of the body with no cure to stop it. Depending on how severe and where the swelling occurs, people struggle with lymphedema in very different ways.

The group meets on the first Wednesday of each month at the Sheridan Surgical, Inc. meeting room located at 4510 Bailey Ave. in Amherst. It has about 20 people and many of them participate in the regular meetings.

Coury said that because there is a scarcity in treatment options and doctors specializing in lymphedema, the group is trying to advocate for more medical specialization in Buffalo. Every other month outside speakers offer educational support. The group also focuses on emotional support and raising awareness.

“The group philosophy is that we are living with lymphedema, not suffering from it. We are trying to be upbeat about it and not let it get us down,” Coury said.

Amherst resident and licensed social worker Sally Cisek is a member of the group. She was diagnosed with primary lymphedema at 19 years of age. “It’s a safe space for us to open up about the issues we face. In my whole life I had never met someone else with primary lymphedema until I found the WNY Women’s Lymphedema Support Group,” said Cisek.

After noticing swelling in both of her ankles, she went to a vascular specialist at Buffalo General Hospital and was given a grim diagnosis.

“I was told I could get surgery but the swelling would come back, and that it would get worse as I got older, during pregnancy and in hot weather. When you’re 19 years old it’s really not what you want to hear. Back then people didn’t know much about lymphedema and they still don’t. It isn’t getting enough attention,” Cisek said.

Cisek was told she was more prone to infections in her legs, and that she had to wear compression garments every day for the rest of her life to help reduce the swelling. This was really tough news at first. “Insurance coverage for garments is hard to come by. My compression stockings cost $110, and my knee-high compression socks cost $70,” Cisek said.

Group members are hoping that the federal bill — Lymphedema Treatment Act — gets approved. It would improve Medicare insurance coverage for doctor-prescribed compression supplies to treat lymphedema, according to Cisez. Although specific to Medicare law, it would set a precedent for Medicaid and private insurers to follow the changes, she said. Without access to garments, lymphedema becomes progressive and increases morbidity.

“It would be really helpful to have more doctors in the area who specialize in lymphedema,” Cisek said. “My biggest fear is if I got in a car accident or something and the doctor couldn’t recognize my special needs and concerns. And I would encourage any woman to come to our support group; it’s still evolving, and now is the perfect time to get support and make your needs known,” Cisek said.

Roswell Park Cancer Institute’s Lymphedema Clinic is one of the places in the area where those with lymphedema can get help. It does have three lymphedema therapists who provide specialized treatment to cancer patients living with lymphedema. Treatment includes the removal of fluid through manual lymphatic drainage massage and by wrapping affected limbs with bandages. Treatment sessions also include education, and lessons on how to keep swelling down and prevent infections.

“Sometimes we see patients with one lymph node removed who get lymphedema, and some who have had several nodes removed don’t get it,” said Susan Oakley, one of the lymphedema therapists at Roswell’s lymphedema clinic. “Statistics on lymphedema are hard to gauge; that’s why you won’t find many. I can tell you that we’re seeing fewer and fewer breast cancer patients [with lymphedema] because more doctors are doing sentinel node biopsy,” which prevents the problem, Oakley said.

Lymphedema is a condition in which the lymphatic system, part of the immune system that helps rid the body of waste, toxins and other unwanted materials, gets blocked. Typically lymph fluid circulates through the body and is filtered by the lymph nodes, which house infection-fighting cells called lymphocytes that help flush the waste from your body. When lymph vessels or nodes become impaired, the fluid cannot transport back to the bloodstream, instead building up in tissues leading to swelling, infections, discomfort and even fibrosis.

There are two types: primary lymphedema, which occurs on its own, and secondary lymphedema, caused by a disease, most commonly cancer, which can damage lymph nodes or require their removal during surgery.