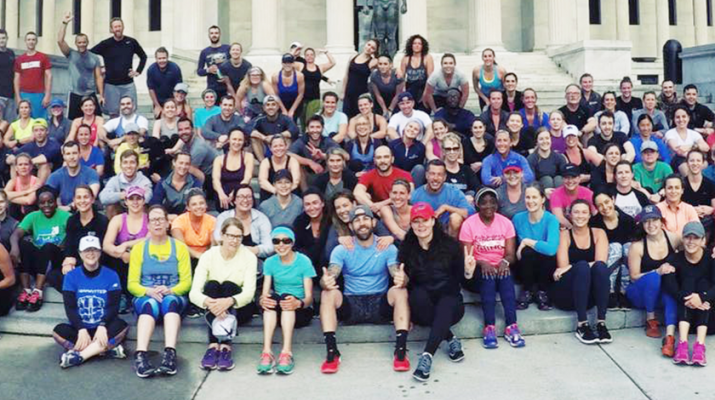 Through sunshine, rain or snow, November Project members gather early on Wednesdays (6:10 a.m.) to work out at various locations in Buffalo

You may have heard of endorphins, those miracle hormones that boost your overall mood and wellbeing. But have you heard of outdoorphins?

At November Project Buffalo, outdoorphins are exactly what you get on Wednesday mornings after sweating alongside a community of people at their free outdoor fitness class.

On June 5, the nonprofit group will be celebrating its second anniversary as a weekly tradition in Buffalo.

According to its website, November Project is a fitness movement that started in Boston. It now has 49 locations across the globe, including a chapter in Malaysia, with an average of 4,200 members per week.

Steve Procknal, a yoga instructor at Power Yoga Buffalo, and Jason Jerome, director of athletic development at IMPACT Sports Performance, decided in 2017 that it was time to bring a chapter to Western New York.

“All we’re trying to do is help people get better … together,” Procknal said.

While Jerome has since moved to Pittsburgh, the November Project is still going strong under the leadership of Procknal and Lauren Corigliano, a spin instructor at Revolution Buffalo.

Workouts begin every Wednesday morning at 6:10 a.m. sharp at the staircase to the Albright Knox Art Gallery and other locations throughout Buffalo — through sunshine, rain or snow.

Typical classes include elements of running and calisthenics or bodyweight training. This might include running, followed by planks, pushups and more. Each workout can be modified to fit the needs of the people who show up, which includes everyone from kids to those in their 70s, Procknal said.

“Honestly, you can always just dance and no one is going to say anything … we’re just happy people are there.”

The workouts are more than just a way to sweat, Procknal added — they’re a space for “raw human connection.”

Unlike most group fitness classes, exercises are done collaboratively with a partner, and Procknal estimates that anywhere between 20 and 250 people show up to each event, making it easy to build these connections. Together, members hold each other accountable for showing up, while enjoying the great outdoors.

Jennifer Gress, an instructor at Power Yoga Buffalo, has been attending Wednesday morning workouts with November Project since a few short weeks after they first started. Initially, she started showing up to show support for Procknal. Then, she made it through the winter months, connected with other people in the group, and found that it sparked a passion for running that she never knew she had. Ever since, she’s been attending classes weekly, with few exceptions.

“I never would have anticipated that it would become a habit,” she said. “I have a real respect and appreciation for it, and the community aspect is what keeps me coming back.”

With inspiration from the group, she even decided to tackle her first-ever 13.1 mile race, the Queen City Half Marathon, in 2017. Then, in 2018, she signed up for another half marathon. Despite the second event being canceled, Gress rallied some of her running friends and held her very own “women’s half marathon” with a handful of her friends, where they covered the 13.1 miles together, supporting each other the whole way.

And during those snowy, cold winter months? Well, Gress says that as counterintuitive as it may sound, those are some of the best and most memorable workouts. Procknal agrees. During those winter months, they go ice skating, snowshoeing, and even sledding at Shakespeare Hill.

“The smiles on people’s faces are unforgettable. You can’t make it up,” Procknal said. He added that it brings out an “inner child” in so many people, especially when speeding downhill.

Big Celebration in the Works

November Project Buffalo will celebrate its two-year anniversary starting at 6 a.m. on June 5 at Sahlen Field. In addition, the group will begin its Sunrise Sundays in June, which are longer workouts from 8:30 to 10 a.m. for five consecutive Sundays. This will include a mix of running or bootcamp, followed by 45 to 60 minutes of yoga.

There is no cost to attend any November Project event, and new members are always welcome.