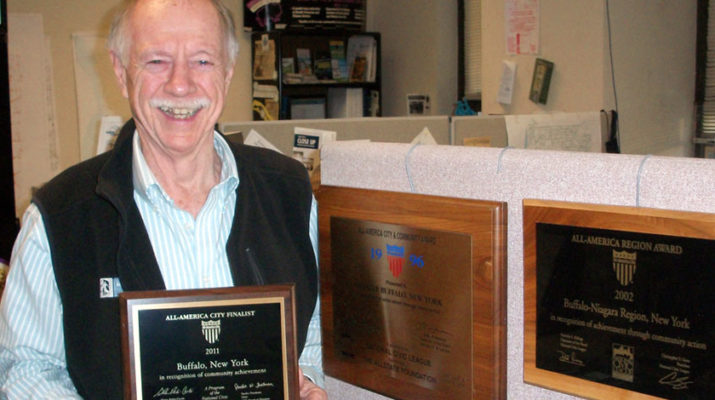 Phil Haberstro and his Wellness Institute continue to tear down walls in Western New York minds, and build bridges with partners throughout the region

“You’re talking about changing the culture, similar to what we’ve done with tobacco,” proclaims Philip L. Haberstro, executive director of the Wellness Institute of Greater Buffalo.

It’s a refrain anyone who has spent time listening to Haberstro’s message has heard more than once.

Of course, “repetition is the mother of skill,” to quote Anthony Robbins, the celebrity life coach who’s been known to advocate his own passion for change.

And it definitely requires a certain skill level to persistently convey wisdom that people are not always inclined to hear. While inclined to encourage mastery, Robbins reminds people that, “if I hear it again, or maybe hear it a different way, eventually it [wisdom] will take hold.”

So Haberstro and his Wellness Institute continue to tear down walls in Western New York minds, and build bridges with partners throughout the region.

It’s been a 30-year plus journey for the athletic Haberstro, playing football at Cardinal O’Hara High, Brockport State, and 11 years toiling as a linebacker for the semi-pro Buffalo Geminis.

“It gave me training in managing programs,” he says, facilitating rathskellars, band concerts, and lectures.

“I was certified to teach physical education,” he said, and that calling caused him to join the Buffalo Athletic Club. “I taught handball, racquetball and squash, and as program director, designed fitness programs for members.

“I developed a real strong emphasis on personal fitness.”

“I believed in what I was doing,” he said while in his Buffalo City Hall office, which was overflowing with reports, books, commendations and awards. “It was a heart-centered passion; I wanted to help people be healthy.”

With fitness foremost in his mind, he formed Buffalo Fitness Consultants, an enterprise he still maintains.  Yet influenced by Peter Drucker, author of “Innovation and Entrepreneurship,” and guided by Drucker’s admonition that “the 21st Century will be the century of the nonprofit. The leadership, competence and management of the nonprofit organization will largely determine the values, vision, cohesion, and performance of the 21st century society.”

With his eye on the greater good, in 1989, Haberstro partnered with attorney John Giardino to form the Wellness Institute.

The initial vision was inspired by the National Civic League’s push to launch the healthy communities movement in the United States, with Haberstro feeling it was imperative to convince employers of the importance of the health of their workforce.

As for creating a healthy community, which virtually coincides with the institute’s website, www.creatinghealthycommunites.org, one recalls that culture-changing challenge, and the urgency to implement transformational strategies espoused by 1986’s Ottawa Charter for Health Promotion. That is a document Haberstro emphasizes as being to health, what the United States Constitution is to democracy.

“With civic angst on the rise, you’re seeing an emphasis and increase in yoga, mindfulness, and meditation,” said Western New York’s only Centers for Disease Control’s-certified Work @ Health Trainer, a comprehensive program to promote employee health.

To that end, Haberstro leads Delaware Park reflective walks at 10:45 a.m. from March to November, on each month’s first Sunday.

He and the institute are at the forefront of Western New York walks, and the region’s “walkability movement,” providing walkability assessment tool kits, and the “Walking Club Toolkit,” a guide to starting a neighborhood or workplace walk.

Demonstrating he’s a man of conviction, and one poised to “walk his talk,” a recent presentation to an American Association of Retired Persons’ conference at Buffalo’s Hyatt Hotel saw Haberstro extol the benefits of walking. He then led a vigorous hour-long walk to the Buffalo River, the Erie Canal Terminus, and back.

“We’ve made twelve applications, been a finalist eight times, and a two-time winner,” he proudly declares, adding he’s ready to again see the city through the process.

“Ninety percent of what we do is in partnership,” Haberstro says in attracting capital through trust and reciprocity. Yet undeterred from considering challenging questions, and drawing from the Ottawa Charter’s call to action, he asks, “What do you need to do to create health in communities? Where can we infiltrate institutions to bring about health promotions and resources?” And “What is the economic investment in health and wellness?”

“The initiatives have to be strategic and comprehensive,” said Haberstro, and that answers will arise through civic, political, and private leadership.

Haberstro and the Wellness Institute are calling for new leadership with Erie, Niagara, Chautauqua, and Cattaraugus counties mired from 56 to 60 out of 62 New York State counties as measured by the Robert Wood Johnson Foundation’s County Health Rankings & Roadmaps study.

Is it something in the order of health-centered leadership? It’s something for Buffalo and Western New York citizens and leaders to think about.