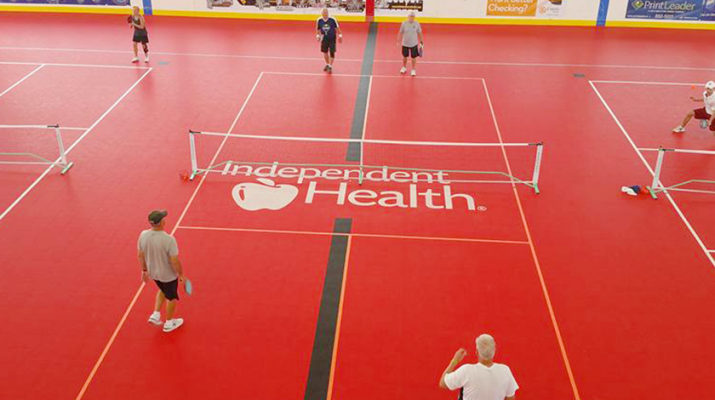 Athletes of all ages, shapes and sizes are embracing what has recently been recognized by physical fitness experts as the country’s fastest growing sport.

Locally, more than 1,000 players hit courts across Western New York for an activity that offers a relatively new exercise option, especially during the cold winter months.

A game that can be played competitively or as a leisurely way to have fun while still breaking a sweat, pickleball is a combination of tennis, badminton and ping-pong.

Using oversized paddles and a small ball similar to a traditional wiffle ball, games are played on a badminton-sized court. Utilizing a low standing net that makes it easy for people of all ages and abilities to compete, the ball must bounce at least once on each side before volleying can begin.

There is major interest in pickleball among senior citizens, especially because it is a sport featured in the Senior Olympics and is a major draw for many “snowbirds” who play locally during the summer months and continue playing wherever they live during the winter, including Florida, South Carolina and Arizona.

But the rapid, high-energy style of play is also attractive to younger people, with teenagers and people in their 20s, 30s and 40s playing on indoor and outdoor courts throughout the Buffalo region.

“It’s fast, it’s fun and it’s a very social game, which is what attracts people of all ages,” said Jason Santerre, the pickleball ambassador for this region on behalf of the United States of America Pickleball Association and the co-founder of Buffalo Pickleball, a local organization dedicated to growing the sport’s popularity in Western New York. “The popularity is skyrocketing here and is growing dramatically with the younger crowd. In fact, a lot of younger competitive tennis players are making the conversion and playing pickleball more often, if not exclusively.”

Local pickleball leagues, some of which are competitive and others that feature casual play, are based throughout Western New York, including weekly action in the city of Buffalo, the Northtowns and the Southtowns. Courts are now used in prominent locations that include Buffalo RiverWorks, Larkin Square, the Boys & Girls Club of Orchard Park, Ellicott Creek Park in Tonawanda and Firemen’s Park in West Seneca.

Frequent players cite the excitement level of each point, the less strenuous toll on the body when compared to tennis and the social aspect as some of the reasons pickleball has become their new favorite pastime.

“It is never boring and it gives us a really good workout,” says Paul Licata, who plays three to four days a week. “I’m 62 years old and it is a very fun sport for me. I enjoy the competition. I plan to play this for years to come.”

Mark Melewski, who works for the Town of Hamburg Department of Recreation, Youth and Senior Services and supervises weekly pickleball action, is impressed with how much the sport has been embraced locally.

“The thing is people who play it really love it,” said Melewski. “It’s great for coordination, testing your reflexes and the concentration aspect of it is something they really enjoy. Our players show up every week, no matter what the weather is outside. It’s an impressive level of commitment. Some of our players go on vacation or live somewhere warmer during the winter but they keep playing wherever they go.”

The ability to play year-round makes pickleball especially attractive to those who do travel, whether it is for a vacation or to spend time at a winter residence.

“I now play four times a week up here after I picked it up five years ago while in Florida,” said Jack Hoerner, a 72-year-old resident of Orchard Park. “I really enjoy the strategy involved. I’ve noticed it’s catching on with younger people. It’s fun to compete, get some quality exercise, see familiar faces and meet new people.”

Men and women compete, with some local players preferring to play mixed doubles, which often leads to rousing games with intense action.

“It’s a really great activity that’s not that demanding on your body,” said Jeanine Hillman. “I’m 60 years old and what I like is it’s a great way to meet people and establish some wonderful friendships. You work up a sweat. I look forward to playing every time I step on the court. My snowbird friends love to play when they go on vacation. I just started playing last year and now I’m hooked.”

The future for pickleball locally is bright, with Santerre pointing out there are more than 300 dedicated pickleball courts at approximately 60 locations throughout Western New York. In addition, more corporate events are using a pickleball theme because the sport is considered an effective team-building event for employees to bond outside of the office.

“We host the New York State Pickleball Tournament and that brings over 200 players to town,” said Santerre. “It’s an incredible social experience that provides fitness while having fun. We are seeing more children playing pickleball in gym class. It is a physical game with a unique mental aspect that helps keep people moving.”

For more information about pickleball, including a listing of local facilities that offer indoor play, visit www.buffalopickleball.com.