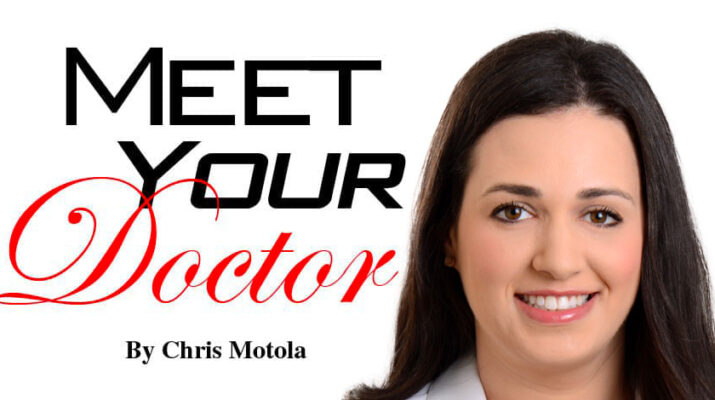 Q: When did you first get interested in acupressure and complementary integrative medicine in general?

A: It’s a long story. I had an interest in integrative and alternative medicine for many years. During my gastroenterology fellowship I met with my research assistant who is an adolescent physician and also does public health, who has training integrative medicine, including qigong, reiki and acupuncture. She helped train me—and I also trained myself—in acupressure. I don’t do acupuncture and am not certified in it. I started researching and learning more about acupressure of the ear and incorporating more of it into both my clinical practice and research. The research really interests me because acupressure has been around for thousands of years but hasn’t been incorporated into Western medicine. So I’m very interested in bridging that gap.

Q: What’s the difference between acupressure and acupuncture?

A: It’s kinda semantics. Typically acupressure is used to describe all types of stimulation of acupoints, which are areas on the body associated with different bodily systems. Acupuncture is concerned with using needles to stimulate those points. But you can stimulate in different ways, including manually or an object. There’s herbal stimulation. Since I’m not certified to use needles, I use electrical stimulation and manual pressure with a small acupressure device or beads attached to an adhesive that can stick to the point for up to a week and provide continuous pressure.

Q: What uses have you found, within your gastroenterology practice, for acupressure?

A: There’s not a lot of data currently that proves that it works, but there’s almost endless uses for the therapy. It’s used for constipation, for diarrhea, for irritable bowel syndrome, abdominal for reflux. So there are different protocols, different recommendations for each of these issues. In terms of evidence, there’s very little. There is some that shows it’s effective for adults with irritable bowel syndrome. We use it based on their symptoms. My own research looks mainly at functional abdominal pain disorders, and I have my own protocol that I use for that, but it’s not a research-validated protocol. So we have guidelines but not evidence. But there are a lot of possible uses.

A: It depends. It’s easier to treat pain from a recent, acute issue like a sprained ankle than longstanding issue. So when I’ve had people who have had symptoms for a short while, sometimes they respond really well to one treatment. When they’ve had years of pain and symptoms we don’t see as robust a response. In my current practice I don’t see patients on a weekly basis for these treatments. I do teach patients acupressure points they can find on themselves. That can give patients ability to manage their symptoms, when they need it.

Q: A while back I interviewed another specialist in your field who said there was a substantial psychiatric component to irritable bowel syndrome.

A: Neurogastroenterology is a field that deals with a lot of that. For example, we know that serotonin, a neurotransmitter that many people have heard of in the context of depression, we know that 95% of it exists in your gut and only 5% in your brain. So we know there’s a very strong connection of nerves and nerve signaling. When those signals get altered, like they do in depression, you can get gastroenterological symptoms. So there’s a huge overlap between anxiety, depression and gastroenterological symptoms. Sometime the treatments overlap as well. Sometimes they’re different.

Q: Because of those overlapping elements, does that tend to send you to other specialties as well?

A: We do refer a lot of our patients for psychiatric help because of the overlap. And often people suffering with chronic symptoms are suffering from stress, which can exacerbate their symptoms. Another tool I use that has very good evidence for irritable bowel syndrome and Crohn’s disease symptoms is medical hypnotherapy.

Q: What’s the response been like from the university and from colleagues? Are they usually interested? Skeptical?

A: For the most part they’re very open and accepting. Most of my colleagues are interested in understanding it better and seeing if they can use these tools. The medical community generally likes things that have evidence, so there’s a lot of interest while also wanting to see data. We know that with kids who haven’t responded well to traditional therapy, or who are missing a lot of school, parents are interested in alternative approaches. That tends to be a lot of our patients.