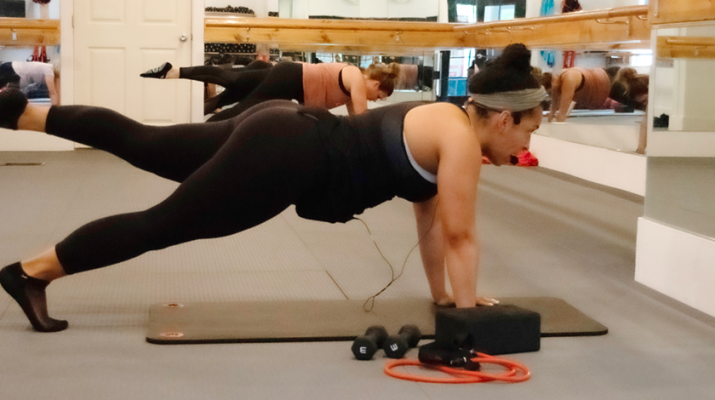 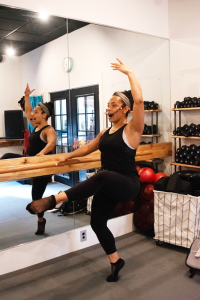 Barre classes set themselves apart from other fitness routines by having some roots in ballet. For those looking to add something new to their fitness routine or simply to begin one, what higher ideal for a fit and healthy body could there be than a ballerina?

I checked out a class at Barre Centric’s East Aurora location recently to see what this kind of fitness was all about.

I have a background in Irish dance, but it has been many, many years since I had a pair of dance shoes on and my primary workout routine involves cardio and weightlifting — running around after my toddler and picking him up, that is.

We all have seen the image of ballerinas neatly lined up at the barre and I wondered how this would translate into a full workout for those who don’t know their first position from their third. I also wondered how effective such a routine would be for those who aren’t versed in any sort of dance.

My hesitation was misplaced, however.

“People will say, ‘I’ve never taken a dance class,’ and ‘I’m not flexible at all’,” said Rachael Humphrey-Leonard, an instructor at the East Aurora location. “We try to strive and tell you that it’s a fitness class based around mostly dance vocabulary and less dance steps.”

The classes are much more than holding onto a bar and striving to get on your tiptoes.

The class moved at what felt like a rapid pace for a first-timer, but the moves themselves were not overly difficult to follow. A resistance band, weights and a foam block were all incorporated and certainly kept the class interesting.

While a part of me expected classical tunes and a somber atmosphere, what I instead experienced was upbeat tunes, an enthusiastic instructor and way more sweat than I had anticipated. There were certainly moments that I chose a modified move in order to make it through. For me, the best part was that following class and the next day, I knew that I had gotten a workout in, but I didn’t feel overly sore or uncomfortable. 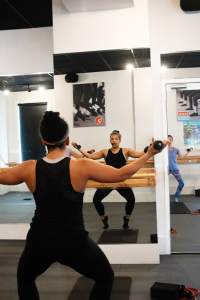 “These are incredible classes because they are low impact. We are working with small muscles that we sometimes forget that we have,” said Humphrey-Leonard. “It’s great for people who are getting back into fitness or have never worked out ever.”

I also walked away feeling like I had gotten some work in on more or less every part of me, and that is no coincidence.

“We are going from head to toe. You’ll never say it’s bicep day or leg day. It’s a full body experience every single class. I’m going to come in and get 55 minutes of my whole entire body,” said Humphrey-Leonard.

According to the instructor, the classes are nearly universally helpful, whether someone is looking to lose inches, gearing up for a big fitness goal, or just looking to spend some time taking care of themselves.

“You’re going to feel like you’re getting a personal training experience in a larger group environment and I think that’s really special to these classes,” said Humphrey-Leonard, adding that small class sizes and attentive teachers make for enjoyable and effective classes.