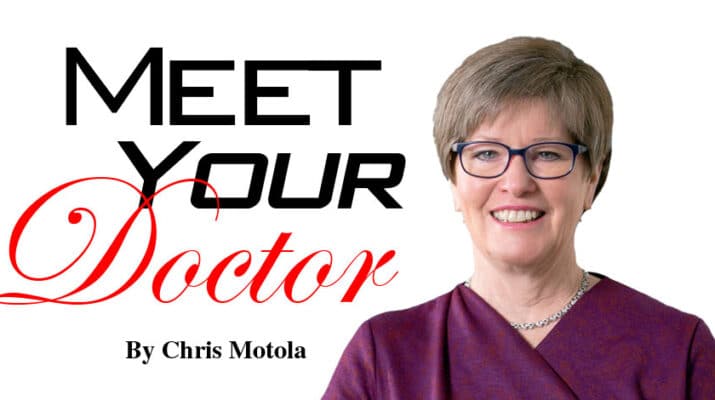 New chairwoman of obstetrics and gynecology at UB talks about career and move to Buffalo, and her plans to expand range of services provided to women

Q: How are you adapting to your new position at chairwoman of obstetrics and gynecology at UB?

A: I’m a reproductive endocrinologist and infertility (REI) specialist, which is what I’d been doing for the past few years, but I’ve also been a chair[woman] previously. I was taking a break and just enjoying being a clinician for a couple years. REI is a very big field focusing on hormones for men as well as women. In OB-GYN there are several subspecialties: maternal fetal medicine, gynecologic oncology and a new one, female pelvic medicine and reconstructive surgery. And we have a few fellowships in reproductive genetics and the new field of embryo diagnostics, which sort of merges into pediatric genetics and cancer genetics. So it’s a real field, but it’s not exactly a subspecialty yet. And then we have a field called family planning that has fellowships, but isn’t recognized nationally. So in our field, we have four well-recognized subspecialties, and a bunch of not well-recognized ones. All of these people [in all those pseudo specialties] do a four-year residency as well as training in other areas, sometimes including research methodologies. There aren’t that many of us who have done that second step, maybe 5,000 in the whole United States.

Q: Is that what brought you to Buffalo? Their ability to accommodate your niche?

A: They wanted someone to help build the whole program, not just my area, which is something that I’ve done before. I was in Pittsburgh [University of Pittsburgh School of Medicine] for a long time. During that time, we launched a women’s health research institute, a menopause program and all sorts of other programs over the course of 15 years. And then I went to Emory [University School of Medicine] to try to establish some of the same things. Then Wake Forest [Baptist Medical Center], same role. Then I was just kind of minding my own business out in Utah [School of Medicine]. To be honest, I had looked at this job before, but was waiting for the new hospital [Oishei Children’s Hospital]. So what made it different for me this time is that the new hospital and school of medicine are remarkable. It’s a great leap forward for Buffalo and will allow us to do a lot more. It’s kind of a new era, and I’m trying to get as much of that done as we possibly can. I feel like the pandemic knocked a bit of the wind out of our sails, but we’re trying to keep our eye on the ball and get back in the fast lane once we get a vaccine or whatever it takes to get this thing under control.

Q: At least it looks like everyone else is in the same boat, too.

A: Oh yeah. I actually think New York is ahead of everyone else.

Q: At this point. It wasn’t looking too hot a few months ago.

Q: Except for hub cities like New York City, San Francisco and Los Angeles. They’re adjacent to each other, but Upstate is far away.

A: Yeah, the super cities. It’s like that poster of New York City from long ago, looking west: it’s the Hudson River, New Jersey and then immediately Los Angeles. The largest fresh water system in the country doesn’t even exist. I do hope people understand that we’re all connected now. It seems more obvious. I think academic medicine is funny thing in that we’re often connected with people who are innovators in other parts of the world. Something you’re working on may have 10, 20 people in the whole world who are experts on it, and where they are seems pretty random. So I think we tend to look in a more global way, but I don’t think it’s a common perspective, unfortunately.

Q: What will your efforts most directly be focused on with the new program?

A: I know this is going to sound funny, but there is sort of a sequence of events that has to happen. So there are must-haves that serve as the bottom foundation. When you think of OB-GYN, it was a fusion product of obstetrics and gynecology, which have since differentiated into other subspecialties. In the beginning, gynecology mostly just meant gynecologic surgery, but it’s expanded over the last half century into interdisciplinary areas. So now there’s such a thing as women’s cardiology, or women’s psychiatry, and all of that kind of morphed into what we called gendered medicine. So looking at how men and women differ in common disorders. The kind of heart disease men get is different than the kind of heart disease women get, and the treatments can even be different. A heart attack also often has different symptoms for women than it does for men. So that whole field of gynecology has become highly interdisciplinary. And there’s one I haven’t really mentioned yet, and it’s a hybrid of all of the above: pediatric and adolescent gynecology. It kind of grew out of REI, but grew into its own field. But it has to do with the maturation of the reproductive system. So any of the areas mentioned are areas that, nationally, may or may not have fully developed programs. So we want to bring these subspecialty areas together, both people who are here now and people we recruit. We actually have a lot of GYN-oncology subspecialties, thanks to Roswell Park, which is one of the strengths of this area. So that’s an example of a program that’s already here and works.

Physician Sarah L. Berga, who specializes in hormones, stress and infertility, was appointed June 1 as the new chairwoman of the department of obstetrics and gynecology in the Jacobs School of Medicine and Biomedical Sciences at the University at Buffalo. She will also serve as president of UBMD Obstetrics & Gynecology and medical director of obstetrics and gynecology and maternal fetal medicine program development for Kaleida Health. She comes to UB from the University of Utah School of Medicine’s department of obstetrics and gynecology, where she served as professor and director of the division of reproductive endocrinology and infertility for two years. She succeeds physician Vanessa Barnabei, who served as chairwoman since 2012.