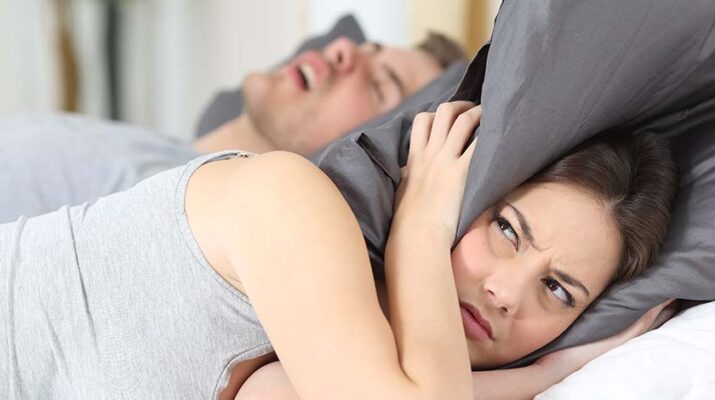 Experts: You are most prone to sleep apnea if you have a large neck size, are older, male or menopausal

The ear-splitting, chainsaw-like sounds coming from the other side of your bed does not necessarily mean that your beloved has sleep apnea.

“Snoring affects more men than women and can occur also in children. Snoring can be light, occasional, and not concerning, or it may be the sign of a serious underlying sleep-related breathing disorder.”

El Solh also serves as a professor of medicine and epidemiology at UB.

About half the population snores sometimes. The phenomenon occurs during sleep when the muscles relax and the base of the tongue vibrates. With sleep apnea, the person’s airway becomes blocked and for 10 to 20 seconds, they do not get enough air. The individual may gasp and choke as the brain wakes the body enough to breathe. As a result, the person feels unrested in the morning.

During deep sleep, apnea is worse, as the muscles relax even more. With snoring, it is usually just the non-snorer whose sleep is disrupted. Sleep apnea fragments sleep, making the person feel less rested. Quality of life is typically why patients seek treatment for sleep apnea. But sleep apnea can contribute to an increased risk for many health conditions.

“Sleep apnea is more serious than snoring because it involves a drop in blood oxygen level and cessation of breathing during sleep,” El Solh said. “The consequences of sleep apnea can be detrimental to the health and wellbeing of patients. These individuals complain of excessive daytime sleepiness, loss of memory, loss of coordination and are at risk of motor vehicle accidents.”

Risk factors for developing sleep apnea include being overweight or obese, large neck size, age, male or menopausal, having hypertension or high blood pressure, a family history of apnea, diabetes, being a member of a minority, or being a veteran.

“Veterans are four times more likely than other Americans to suffer from sleep apnea,” Kuczkowski said.

The disruption in breathing deprives the brain and the rest of the body of sufficient oxygen. The condition has four types: obstructive, central, complex and positional.

Obstructive “involves a decrease or complete stop in airflow despite an ongoing effort to breathe,” Kuczkowski said. “It occurs when the muscles relax during sleep, causing soft tissue in the back of the throat to collapse and block the upper airway.”

Central sleep apnea involves the brain not sending signals to the muscles that control breathing. Kuczkowski said that this breathing disorder involves problems in the brain or heart, not a blockage.

“We spend one-third of our lives sleeping, so it must be important,” said Alberto Monegro, pediatric and adult sleep medicine physician with UBMD Pediatrics and UBMD Internal Medicine. “If you snore and have risk factors, you should be screened.”

“If you score three or more, you may consider seeking further evaluation,” Monegro said.

He is also an assistant professor in the department of medicine at Jacobs School of Medicine and Biomedical Sciences at UB.

Emerging research may indicate that race could make a difference in death caused by sleep apnea. Physician Yu-Chee Lee, medical resident in the Jacobs School of Medicine and Biomedical Sciences at UB, who sees patients through the Catholic Health System, authored a study that indicates more Black men die from obstructive sleep apnea than whites and more than Black women.

Published in February’s Sleep Medicine, the study looked at data from 1999-2019. The mortality rates plateaued beginning in 2008 for whites and Black women, indicating that compliance with using continuous positive airway pressure devices (CPAPs) may be one reason for the continued increase in the rate of death for Black men.

“Even the socio-economic status, access to care and facility behaviors may be factors,” Lee said.

Typically, insurance coverage permits patients to self-refer to a sleep specialist. Most people can have a sleep study performed at home. Some do need to stay overnight at a sleep center.

Many patients also assume that treatment means sleeping with a cumbersome CPAP. But newer therapies like dental devices and Inspire, an implantable device, can make treatment easier.