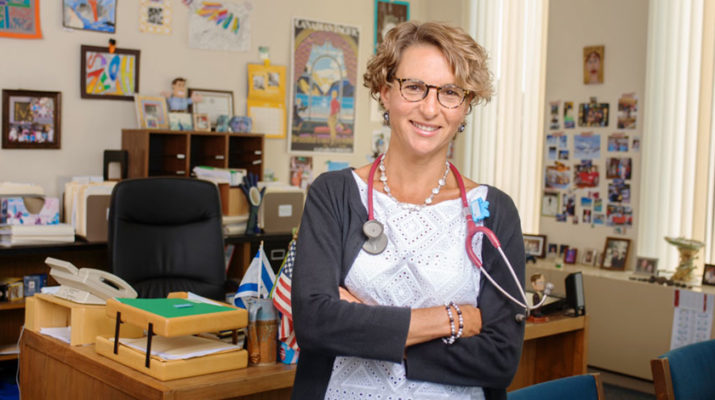 Respiratory syncytial virus, more commonly referred to as RSV, is a respiratory illness that can have severe implications for young children and is common this time of year.

The contagious illness is spread just like the common cold, according to the American Academy of Pediatrics, through direct person-to-person contact, unclean hands or unclean surfaces. While being coughed or sneezed upon by someone with the virus can spread RSV, there are other ways in which a person can come down with the illness.

According to physician Gale Burstein, Erie County commissioner of health, one of the factors which makes RSV problematic is its ability to remain contagious on surfaces that individuals might come into contact with.

“It’s pretty hardy, so it can survive for 24 hours, so it can be transmitted by coming in contact with areas that somebody else who had the virus might have touched,” she said. This can include anything from a doorknob to a tabletop.

Burstein advised that simple steps can reduce one’s risk of contracting or spreading the virus, including frequent hand washing, which is also good practice to avoid other contagious illnesses such as influenza this time of year.

“Hand washing is the number one prevention in any sickness,” said Sierrha Pless, a registered nurse who works at John R. Oishei Children’s Hospital.

“Also, staying away from other people who are ill,” added Burstein. “If they look sick, that means they are sick. We call this social distancing.”

Pless noted that while sick individuals should be kept away from particularly infants, in cases where that is unavoidable such as parents or siblings, regular disinfecting of surfaces can help.

The same rule, however, does not hold water for those who look well, which is why preventive measures such as hand washing are so important.

“Even though an individual might feel well, they may be shedding the virus, so it’s better to think about prevention,” said Burstein.

With young children who are particularly at risk for serious complications, the commissioner advised that adults wash their hands before playing with children and both before and after diaper changes.

According to the AAP, children under 12 weeks and premature and low birth weight infants are particularly at greater risk for severe RSV infections. Even for healthy babies, their small airways and lower baseline volume of bodily fluids put them at higher risk of severe complications than older children and adults. This risk exists on a continuum, according to Burstein, and each child is different, so there is no exact age cap at which greater risk ceases to exist.

According to Pless, it is best to try to limit visitations with infants this time of year in order to avoid potential risk.

“Of course, around the holidays it’s hard unless you keep yourself holed up,” added Pless, who is a mother of two herself. “So again, making sure that there is handwashing and you’re not around people who are sick [is important].”

Pless added that even when visitors are around, they should not touch the hands or face of a baby and that keeping sick young ones home from daycare or school can help in preventing the spread of RSV.

Infants, however, are not the only ones who must be cautious of this virus.

Any individual with such chronic conditions as asthma, chronic lung or heart disease or compromised immune systems can be at higher risk for severe complications.

While parents might do every thing they can to protect their children from contracting RSV — there is no vaccine at this time — children might still become infected and it can be difficult to know when a situation goes from needing mom’s TLC, to requiring professional medical attention.

According to the AAP, parents should look for symptoms of bronchiolitis, dehydration, pauses or difficulty breathing, grey or blue color in the tongue, lips or skin and significantly decreased activity and alertness to know when to give the pediatrician a call. Bronchiolitis symptoms include fast breathing, flaring of the nostrils, head bobbing when breathing, rhythmic grunting during breathing, belly breathing and wheezing.

The AAP also notes that, “some children with RSV may be at increased risk of developing a bacterial infection, such as an ear infection.”

Parents should consult a doctor if their child’s symptoms worsen or do not begin to improve after seven days, fever reaches 104 degrees for a child of any age or reaches 100.4 in children 12 weeks and under, or if they experience chest pain, ear tugging or ear drainage.

According to Burstein, there is no cure for RSV and treatment is entirely symptom management. If a child comes down with the virus, nasal saline and gentle suctioning, cool mist humidifiers, lots of fluids and frequent feedings and acetaminophen or ibuprofen can all help a child be more comfortable.

So with another Buffalo winter upon us, you can help reduce the spread of viruses such as RSV by keeping your hands well-washed and admiring the infants around you from a bit of a distance, even if you are feeling well.

Photo: Erie County Commissioner of Health Gale Burstein: “[The RSV virus] is pretty hardy, so it can survive for 24 hours, so it can be transmitted by coming in contact with areas that somebody else who had the virus might have touched.”