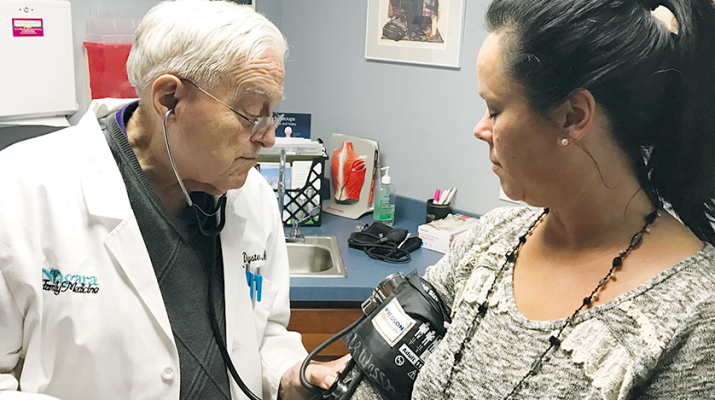 Melvin Dyster, a physician at Niagara Family Medicine, has been practicing medicine since 1954. “I love it,” he says. He says he wants to work until age 95

While many in the health field retire early for a variety of reasons, some practitioners continue working long after the standard retirement age.

One of them is Melvin Dyster, board-certified family practice physician at Niagara Family Medicine. Now age 89, Dyster has been practicing medicine since 1954 because, “I love it,” he said simply.

After he completed medical school in 1952, he served full time in the US Army for two years, then passed the board examination in family medicine. He continued to serve in the military training doctors and practicing. He retired from service as a colonel and continued to practice family medicine.

A few years ago, Dyster transitioned into what he calls “semi-retirement” but he still sees patients Tuesdays and Thursdays, works with residents Mondays and Wednesdays and makes house calls to see patients on Fridays.

“I could have retired 26 years ago but I like it,” Dyster said.

Passing on medical expertise is yet important to Dyster.

“I still spend half my time teaching young doctors how to be family doctors,” he said. “It’s important they’re doing it for the patients.

“I tell residents, ‘You’re probably higher IQ than most the people you see. The good Lord gave that to you to help people, not to make money.”

His perspective on the medical industry has remained constant; however, many changes in medical practice have disappointed Dyster. He feels that the government and insurance companies have eroded the doctor/patient relationship. When he sends patients to specialists, they cannot always get the care he recommends because their insurance won’t pay for it.

“I’m so disgusted so many others put their noses in medicine to make money and, as doctors, we are just trying to make patients better. I’d like to go back to the old days when I’d make only house calls and people would go get a tin from the cupboard and say, ‘How much is that?’”

He feels that at present, insurance companies hold too much control over the choices physicians and patients make. He would like to have care decisions in the hands of families and their doctors.

Dyster is big on families, both in his medical practice and personally. He and his wife, Mary, had 10 children — all who graduated college — and 18 grandchildren. A few of his children work in the medical industry.

Dyster described wife Mary as “a pretty little Irish girl” he noticed while he was working his way through college. Mary, a student nurse at the time, asked him to help her with her work. That turned into his invitation to dinner.

“She was the only girl I dated twice,” Dyster said.

Mary died 19 years ago. She, too, was active in the medical field, working as a nurse and also mentoring others. The Mary C. Dyster Women’s Pavilion at Niagara Falls Memorial Medical Center was named for her.

In his spare time, Dyster enjoys operating a radio as an amateur and he has a pet bird. But he has described medicine as “one of the two loves of my life” with Mary as the other.

“I just enjoy working with people,” Dyster said. “On a day off, I work on the computer but I don’t get feedback from a computer. It’s so gratifying to work with people and help them feel better.”

He likes to hear patients say when they see him out and about, “There’s my doctor.”

He even gives patients his cell phone number but asks that they don’t call between 8 and 8:30 when he’s at church every morning. Dyster said that no one abuses the privilege and that patients feel better just knowing they can call. “That’s the doctor/patient relationship.”

Dyster advises medical students to go into family medicine in locations where they’re needed, not in a large city.

Dyster recently had a physical and was told he can work until he’s 95.

He attributes his personal longevity to eschewing tobacco, limiting his alcohol to a glass of red wine twice weekly and “I try not to cuss and swear,” he added. “I enjoy people, particularly children. I love kids. I’m so lucky that God gave me this opportunity to help people.”

In an era when many physicians retire early, he has continued practicing because he has remained patient-focused, despite the changes in the medical industry.

“If you keep that in mind, you can swallow a lot of junk to help patients,” he said. “I take care of people as they come. I don’t worry about ordering more tests or visits to get paid more. The pay you get is from the gratitude of the patients. You can’t buy that.”