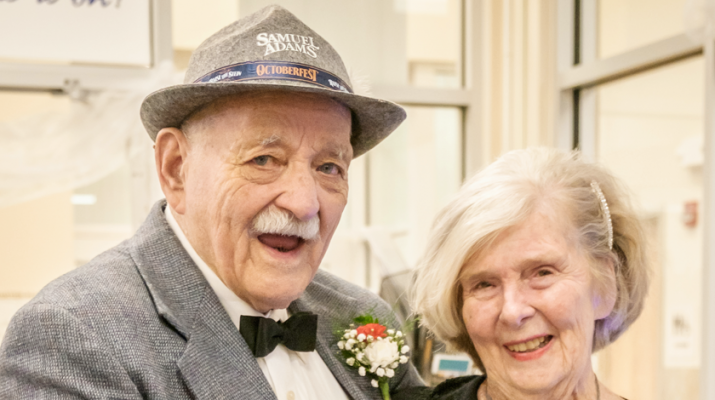 Elizabeth “Ebeth” Merkle and John Denninger of Rochester go dancing weekly, eat out often and attend festivals and other events together. Though the sweethearts have assigned each other pet names and swoon at “their” song, the couple has no plans to marry. Merkle, 81, and Denninger, 82, offer an example of what demographers call a “living apart together” (LAT) couple: romantic partners who date but never wed or cohabitate.

Research presented in April 2018 by Huijing Wu, a graduate student at Bowling Green State University, stated that of the 50-plus-aged people surveyed who were coupled, 39 percent were in LAT relationships, 31 percent were dating and 30 percent lived together outside of marriage.

With older adults remaining healthier longer, and with more opportunities to socialize such as various senior groups and meet-ups, it’s not surprising more find someone special. That’s how Merkle and Denninger met nearly two years ago while eating at the cafe at the Lily Cafe at the Maplewood Family YMCA in a Rochester suburb.

“He asked if anyone had any coupons to take his daughter out to dinner,” Merkle recalled. “I had scads of them. I took them in for him and he used them. He asked if he could take me out to thank me.”

She said that Denninger had been a widower of 21 years at that point and craved socializing. As a widow of five years, she felt the same way. They had enjoyed spending time at Lifespan and going to the YMCA, but together, the couple really sparked. They established a ritual of dancing at Johnny Matt’s in Webster Fridays.

“We need sociability, companionship, understanding and the feeling that somebody cares,” Merkle said. “The people who enjoy being alone are different type of people. Everyone is gregarious in their own ways, but we can’t believe the fun and laughter we have. We just click. John says, ‘If you’re over 80, there’s still a chance for life and love.’”

Merkle said that she’s heard many people her age saying they’re finding a second chance at love, but they’re not interested in marriage, either. LAT works for them as well.

“When you’re 80 and the government steps in, they take so much out of your Social Security if you’re a family unit,” Merkle said.

She and Denninger also prize their independence and living arrangements. Unlike couples just starting out, they both have entire households full of furnishings. Combining this aspect of their lives would likely involve paring down their belongings. LAT makes life easier.

She owns a dog and cat; he has five dogs. She likes to play cards and attend Red Hat Society meetings. He likes working out at the YMCA.

But getting together for dates and outings suits them fine.

“I didn’t look for this; believe me,” Merkle said. “We both had very happy relationships, each raising three children.”

The couple has enjoyed their time together so much that they hosted a commitment ceremony at the Lily Cafe on — what else? — Valentine’s Day, Feb. 14, 2018, but they’re not married. Merkle said they’re happy without marriage.

“Even thinking about the times we spend together, I just glow,” Merkle said. “We have nicknames. We have ‘Beauty and the Beast’ as our theme song. He asked, ‘How did you get with a beast like me?’ and calls me ‘Beauty.’”

It may seem like couples this age would partner more traditionally. But with marriage comes more responsibility.

Keeping up some boundaries can prevent complicating their lives at a time when many want more simplicity.

“I try to foster whatever’s going to maximize that person’s personal happiness,” Stall said. “As people get older, their circle of human contacts shrinks. To have someone to maintain and expand that, it helps make life worth living. You have someone you enjoy spending time with.”

Despite their departure from the traditional relationship patterns LAT couples may have experienced in the past, “a lot of people are very happy with that kind of relationship,” Stall said. “When you live alone, you can do what you want to do when you want to do it. You don’t have to accommodate the other person’s quirks and habits that might be annoying.”

LAT couples also don’t have to change or share their financial arrangements and resources. While this level of autonomy is good in this area, it may not work in all areas of life. Should a health emergency arise, a LAT partner won’t have legal power to help make any health decisions.

The Health Insurance Portability and Accountability Act of 1996 (HIPAA) even prohibits providers from sharing medical information without a legal sign-off from the patient.

Merkle said that in her case, both their families approve of their relationship and would let the other know if a medical emergency arises.

For LAT couples where this isn’t the case, signing paperwork at their doctor’s office and within their health system can help their significant other gain access to their health information.

The health care proxy is a different legal instrument that designates the person who makes health care decisions. Oftentimes, people designate an adult child to fill that role.

For now, Merkle and Denninger take life one day at a time.

“It’s just magic how every day is another great day,” Merkle said. “You should be able to get up and enjoy every day. We’re spontaneous and it’s fun. Nothing has to be planned and promised.”