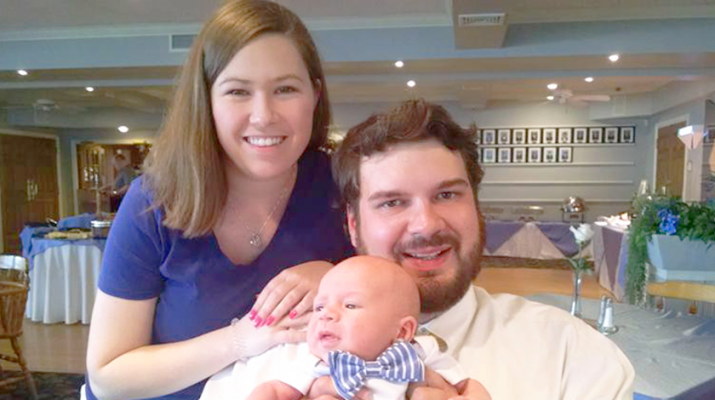 ‘Bringing a child into world is adventure beyond words’

I have always wanted children — four, maybe five and a mix of biological and adopted. I imagined watching our little brood run around the back yard in the summers and I dreamed of these imaginary little people growing into wonderful adults who I’d look at someday and glow with pride, many long years into the future.

When my fiancée, Scott, and I found out I was pregnant last July, it was unanticipated and I found myself suddenly flung from the soft-edged dreamscape into the realities of parenthood that were, from the very start, simultaneously wonderful and nerve-wracking.

While I’d be having my first child — a little boy as we soon found out — at the age of 27, I wondered every day of my pregnancy if I could possibly be adult enough, or in the simplest terms, ready to take on this monumental task.

I started preparing the best way a type-A, self-professed word nerd could: I read. I tried to gain an academic understanding of what this journey would be, and I would encourage any first-time mom or dad to do the same. It was so comforting to understand the stages of labor, to know what pregnancy symptoms, though seemingly alarming, could be anticipated and would be totally normal.

I relished researching baby bottle brands, comparing cribs and pouring over reviews of strollers and play mats so that I could be positive that I was choosing the best of each.

Suddenly, I couldn’t fathom what the future held with any certainty.

There are, however, so many things before and after your little one arrives that no book on earth can brace you for. The first time you feel a kick, beyond those flutters that you just can’t conclusively name, your heart fills at the same time your brain seems to empty in the struggle to grasp that you’ve just truly felt your child for the first time.

On the flipside, you also can’t prepare for the ways in which your personal space will be utterly invaded, from unsolicited belly rubs, off-the-wall advice, to the fact that something about a pregnant woman seems to make the majority of mothers bust at the seams with the need to share the goriest and most terrifying details of their own child’s birth. I will simply never repeat some of the things that I heard during those months.

Then, your child arrives.

I was mentally set on epidural anesthesia from the very beginning despite many women repeatedly telling me that they endured without one. While I am sure I would have made it through, I had no interest in challenging the notion.

On our way to the hospital, holding Scott’s hand, I can honestly say I was experiencing fear in a way I have never known before. By the time we got to the hospital, I was in immense pain and half of the plans I had made for my delivery day had long-since been thrown out the window. I had been told time and again of long labors for first-time moms, of expectant parents sent away to labor at home for hours, and my own mother’s tales of getting up and taking a shower before things got serious enough to get in the car.

From ‘nightmare’ to joy

I, on the other hand, was in a delivery room with an epidural in my spine in less than four hours. I don’t imagine, so long as I live, that I will ever again know such relief as that epidural taking effect. The first few hours of labor were rough and scary. The nurses didn’t seem to take me seriously when I told them I thought my labor was moving quickly.

I was, after all, just a first-time mom. Once we established it was go time, however, the experience was nowhere near the nightmare I had been warned of.

Holding my little guy for the first time, and seeing him in the arms of his dad and grandparents, was something that will be forever etched in my memory.

Our son — Ray Thomas Boyer III, in honor of his late grandfather, or Tripp for short — was born on a Monday evening and we were in the hospital two nights. There was some crying and I vividly recall wondering how anyone ever got the knack of swaddling a baby.

On Wednesday afternoon, we were sent home with our newly expanded family.

I was giddy and excited, but nervous at the same time, and it turns out, rightfully so. The first two months now live in my memory as a totally disjointed blur. To say it was a challenge would be an understatement and I will openly admit, there were many tears along the way.

I cried when I struggled to get the hang of breastfeeding. I had assumed that my instincts and my son’s would kick in, creating a perfectly harmonious bond. Instead, we struggled and we had to supplement and my heart broke thinking that this was my first failure as a mother.

I cried the first time I got to lay down in my bed, as we had made camp in the living room with the Pack n Play bassinette for the first couple of weeks because somehow, it just seemed easier. Life had changed so drastically since the last time I had placed my head on that pillow and it all seemed to overpower me in that moment.

I cried at songs on the radio and commercials on TV, and once at the notion of apple pie, though for the life of me, I can’t remember why now. Hormones are a real killer sometimes.

Slowly but surely, we started finding our groove. We discovered that our son was allergic to dairy and all of a sudden the screaming fits that lasted for hours calmed and for the first time, I felt like we had fixed something for our son.

We learned to laugh at him spitting up in his daddy’s ear and found energy to see the perfect beauty in his sleeping face before we went to snag some sleep ourselves.

At 4 months, he’s not quite playing in the back yard just yet, but when he reaches out and grabs a toy, or rolls on his tummy with his cute little bum in the air, I’m already overwhelmed with joy. I can’t wait for those days, once seen as so many years in the future, to unfold.