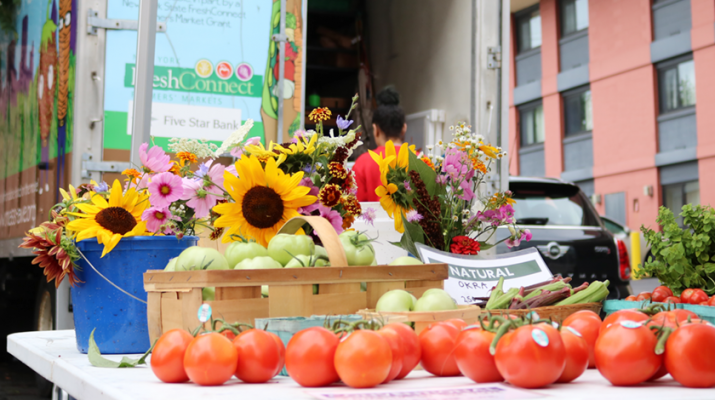 The summit is an opportunity for mobile market managers, who run mostly isolated operations, to share their struggles and successes and discuss best evidence-based practices to running a successful market.

The summit will share research from UB’s veggie van project, a $3.1 million project federally funded by the National Cancer Institute.

Lucia Leone, Ph.D., is the lead researcher for the veggie van project and an assistant professor of community health and health behavior at UB School of Public Health & Health Professions. She first worked on the veggie van project at the University of North Carolina at Chapel Hill, and her team found that, on average, people with access to the veggie van reported eating one additional cup of fruits and vegetables per day than those who don’t.

“In 2010 when we started, there weren’t many veggie van models to look toward or good research out there. We want to make sure people operating veggie vans are using effective, evidence-based practices,” Leone said. “Mobile market managers have been interacting informally, but to get together and share best practices, this is the first time we’re doing it,” Leone said.

As part of the veggie van project they created a tool kit to offer evidence-based research and best practices on running a mobile market. They will be selecting eight partners to provide funding and technical assistance to help grow their mobile markets. Allison DeHonney is one of eight finalists for partnership, chairwoman for the Food Policy Council of Buffalo & Erie County, and president of Urban Fruits & Veggies, which has run a mobile produce market in Buffalo since 2015.

She started the business to bring access to Buffalo neighborhoods in food desert areas and sells produce at three farmers markets on Buffalo’s East side as well as other locations.

DeHonney plans to expand from one to three mobile markets serving Buffalo to increase partnerships and serve more customers. She would like to see a community for veggie van operators to collaborate or help each other.

“Our community needs so much. No one organization can tackle it all. I was not welcomed when I started my mobile market. I’ve found organization, scheduled times and marketing are key to running a successful mobile market.”

The Massachusetts Avenue Project, an urban farm on Buffalo’s west side that runs a going green mobile market, is also a finalist to partner with the veggie van project. MAP has been running a mobile market since 2009 and operates a food box truck that they set up as a farm stand. They plan to use the assistance and funding to pilot a food box program.

“Receiving the grant would change how much time is spent at our different locations. Right now we’re spending a few hours at each location and haven’t been able to start a food box program as of yet,” said MAP’s markets director Danielle Rovillo.

When it comes to collaboration, Rovillo said by and large there are not a lot of resources specific for mobile produce markets.

“Most of the resources are not attuned to a mobile market operation. And models for veggie vans are all so different. Collaboration has to happen at the national level,” Rovillo said. “I’m excited to get to the summit and hear how other managers have overcome certain challenges, and what their best practices are.”