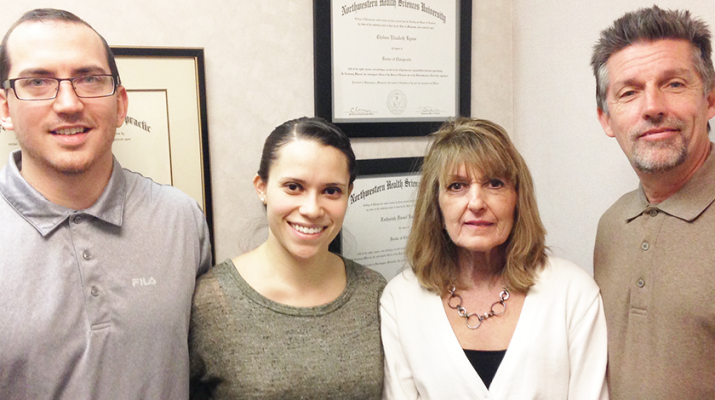 Couple excited their adopted daughter has joined the practice, also as a chiropractor

For the past 30 years, the Lyons family has worked to relieve Western New Yorkers’ chronic pain and discomfort at Amherst Chiropractic Associates.

And it’s looking as though they may continue for decades more.

That’s because Tom and Elizabeth Lyons, who started the practice at 1622 Hopkins Road in November 1986, recently brought on their adopted daughter, Chelsea Lyons, who has long dreamed of following in her parents’ footsteps.

“I think I heard Chelsea say she wants to be a chiropractor when she was in second grade,” Tom said.

Unlike Chelsea, neither Tom nor Elizabeth grew up with dreams of working in chiropractic, or even in medicine at all.

After high school, where the then-East Side couple met, Tom found work as a draftsman, and Elizabeth worked as a pulmonary doctor at Mercy Hospital, having received a degree in medical assisting from Erie Community College. But soon Tom grew tired of his job and sought new employment.

He had long been fascinated at how his own chiropractor, Dr. Grankowski, was able to relieve the headaches he suffered as a child and thought it may be a viable career path for himself.

“He talked to his chiropractor that he went to as a young person, and always was amazed that he felt better and didn’t take any medications,” Elizabeth said.

After researching various schools with chiropractic programs, he settled on Northwestern Health Sciences University in the suburbs of Minneapolis, Minn., in part because he felt it would be easier for Elizabeth to land a job in such a large metropolitan area.

“I had no intention at first of going to chiropractic school,” Elizabeth said. “But when he started, the students and their spouses could go to the school clinic. I started to feel better; I had less headaches. And I kind of said, ‘Hey, I would like to do this, too.’”

Tom urged her to attend, pointing out that it would be easier to attend school then, while they were already living near a chiropractic school. So, in 1982, right as her husband was finishing his degree in chiropractic, she enrolled.

Upon Elizabeth’s graduation, the couple relocated to Amherst and opened the location where they still serve patients today.

“This has been a great location. When we moved here they were building a lot of houses, and the neighborhood kind of grew up around us,” Tom said.

Chelsea also grew up around chiropractic, and found that it helped tremendously with high school sports-related injuries and pain. She worked at the family practice throughout her pre-chiropractic studies at the University at Buffalo.

“I like seeing people get healthy without drugs or resorting to surgery,” Chelsea said. “I saw a lot of people come in here who were not walking straight, and then they would get adjusted and they would walk straight. That was kind of the light bulb.”

So, after completing her studies at UB, she, like her parents before her, enrolled at Northwestern Health Sciences University.

She received her doctorate in 2015 and soon began working at her parents’ practice.