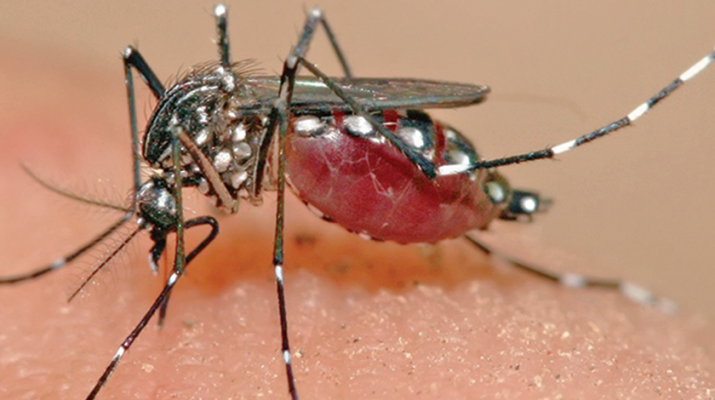 When most people think of summer and fall fun, they also think of mosquito bites.

While mosquitos are a huge presence during the summer, they don’t leave just because it’s early fall. The females need blood to produce eggs. But while we are swatting our way through what seems like swarms of mosquitos, their reproduction needs are at the bottom of our list of concerns.

Most mosquitos like to be out at dawn and dusk and rest during the hotter part of the day unless we disturb them. It is not your imagination that some people are “more attractive” than others to these hungry females. When the mosquito draws blood from us, it injects some saliva into the site. This is how diseases are spread by mosquitos. In Downstate New York, some people have tested positive for Zika, a mosquito-borne virus that has been linked to birth defects such as brain damage, blindness and microcephaly (small heads) in babies. There seems to be little risk to pregnant women who don’t travel to certain parts of the world but nonetheless mosquito bites are irksome and itchy.

Experts differ in their opinion as to whether the Asian tiger mosquito — which is believed to transmit the Zika virus — can adapt to the cold winters in New York state. In an article by syracuse.com reporter James T. Mulder, he quotes Laura Harrington, chairwoman of Cornell University’s department of entomology, as saying, “Although the Asian tiger mosquito is found on the western tip of Long Island and the lower Hudson River Valley, it cannot survive Upstate New York’s cold weather.”

Other scientists believe this insect is highly adaptable. The American Mosquito Control Association states that while adult females live two to three weeks, some species that over-winter in garages, culverts and attics can live as long as six months. In August, the Centers for Disease Control and Prevention published a map suggesting that Upstate New York cities are at risk but mostly due to travel-related cases.

Whether its concern over the risk of disease or dread of those itchy, unsightly bites, there is a popular remedy to greatly reduce mosquitoes on your property. Companies that spray mosquito barriers have seen an increase in requests this year.

People want to be rid of the mosquitos while at the same time they want a solution that is environmentally friendly. A commercial garlic spray is far more potent than anything a person can concoct at home. It is that it is not harmful to people, pets or to beneficial insects such as pollinating bees and butterflies.

People often ask if their property will smell after a treatment. After just a few minutes, people cannot smell the sprayed garlic. The garlic spray is effective in three ways. It kills the adult mosquitoes and suffocates mosquito larvae in or near standing water such as kid’s plastic swimming pools, ponds, puddles, tires and even watering cans. It also keeps new mosquitoes out of the area. Larvicides placed in ponds or wading pools also help control mosquitoes by killing young mosquitoes before they can grow into adults. Mosquitos are active well into the fall so it’s not too late for home owners to take precautions.