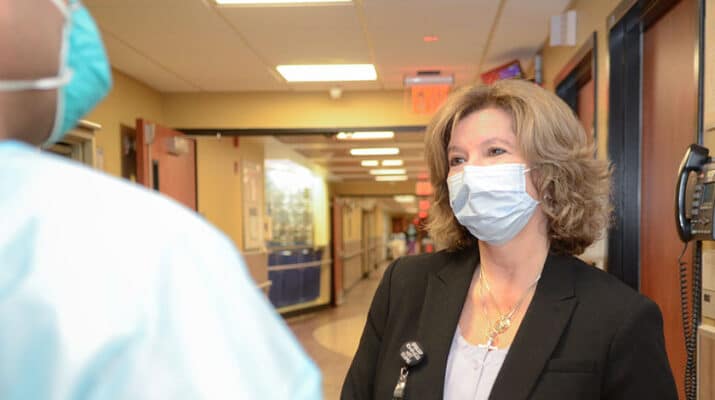 Even after 40 years and several health crises, she’s not ready to stop

Angela Vacanti is an infection prevention practitioner at ECMC and the knowledge and wisdom she has developed during a more than four-decades-long career has come in quite handy during the past year.

After graduating from a two-year program in 1979, Vacanti went straight to ECMC. She said that her reasoning for entering the medical realm was fairly straightforward.

“It’s just helping people, there’s no better feeling in the world,” she said. “It’s a rewarding career and you’re constantly fulfilled by helping others.”

And helping others is just what she has endeavored to do through her entire career, 35 years of which she has spent in infection prevention.

While this pandemic has been referred to as “unprecedented” countless times since COVID-19 changed life as everyone knew it, this is hardly the first time that Vacanti has dealt with a major health crisis.

Early in her career, a terrifying new virus, known as HIV, suddenly began taking the lives of people who had otherwise seemed perfectly healthy. She handled that situation just as she has handled many situations since, by doing her best to educate herself as thoroughly as possible about the foe at hand.

Since then, she has also been witness to Ebola, as ECMC was and remains, a designated Ebola center.

When Vacanti became a mom, she intended to take some time off, but that was not in the cards. She recalled being home for only a handful of days when she received the call, asking if she would like to come work in infection prevention.

Although she now carries both her immense knowledge and responsibility in a way that seems effortless in speaking with her, reaching this point was not a task without its tribulations.

As an adult, Vacanti went back to earn her bachelor’s degree.

“There were times my kids would go to bed and they’d get up in the morning and I’d still be up working,” she said.

But for a woman who thrives on the notion of helping others, the sacrifices have been more than worth it.

“One of the rewarding things about infection prevention is that you benefit the patients as well as the staff in every department,” she said. “It’s every person.”

She takes joy in not only constantly educating herself, but helping to educate those around her.

“It’s a lot of constant reading and educating yourself and making sure that you’re on top of this stuff. It’s really important,” she said. “If I’m going to be the go-to, I need to know what I’m talking about.”

And she is, in many ways, to many people, the go-to person. Whether she is sitting on one of a large number of committees which deal with anything from hospital associated infections to quality improvement work to committees that deal with policies and procedures or whether she is simply helping to comfort, educate and reassure staff and patients alike, she is looked to as an immense resource in how to keep all those who walk through the hospital’s doors as safe as possible.

While that was never a light load to carry, COVID-19 has made it all the more immense and she said that now more than ever, making sure that people are educated about what we are facing, is critical.

“This thing has been so fluid and that has had an effect on the confidence of the staff, too,” she said. “You just have to talk to them and focus on the science and what the experts are saying.”

When she has encountered those who seem to be suffering the ill effects of misinformation, she said that although that can be challenging, the response is fairly simple. She deals in facts and science and stays calm and non-confrontational at all times.

While Vacanti said that she loves what she does, this has been a time of immense responsibility for her, with calls often coming in the middle of the night and a never-ending need to continue to be vigilant; but it is the very environment in which she works that makes that easier to bear.

“The feeling of responsibility has been huge through this and that mother in you comes out, because ECMC is my family,” she said. “Even back when it was Ebola, I would tell them, ‘I’m here, whatever you need. You are my people, you are my family and I’m not going to let anything happen to you if I can help it.’”

With that sense of family has come a feeling of camaraderie that has also carried her through.

“I will say, I don’t carry this alone,” she said. “Our leadership team here is incredibly supportive and very connected from the very top all the way to the front lines.”

And Vacanti is back on the front lines these days, volunteering to work in the vaccination clinic.

“I’ll tell you, that’s one of the most rewarding things that I do,” she said.

She said she also takes pride in how ECMC has handled the administration of the vaccine, making sure that the process runs smoothly and none of the precious vials go to waste.

Perhaps it is the sense of family, the feeling of fulfillment, the robust support or just the knowledge that what she does is so important, but after 40 years and several health crises, Vacanti said she simply isn’t ready to think about walking away from the field and the second home that she loves.

Photo: Angela Vacanti, an infection prevention practitioner at ECMC, talks to a colleague at the hospital. “There were times my kids would go to bed and they’d get up in the morning and I’d still be up working,” she says.