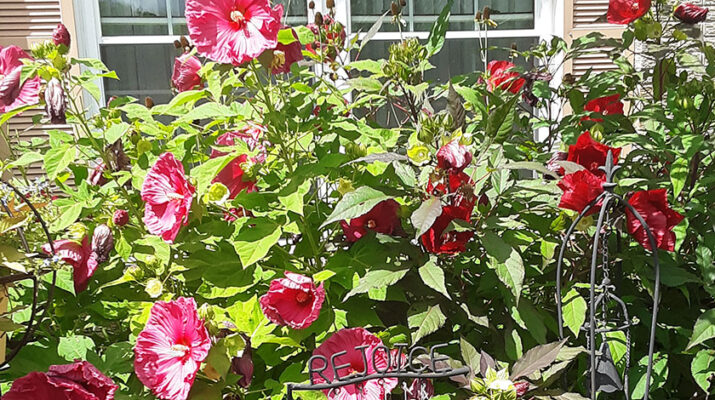 The world has finally come alive with color and every shade of green again in Western New York, and for many, that is a signal it is time to get out to their gardens.

Gardening has many notable health benefits. According to the Centers for Disease Control and Prevention, gardening is considered a moderate intensity level activity and can help a person reach the recommended 2.5 hours of weekly physical activity of that level.

According to the CDC, reaching that goal each week can reduce the risk for obesity, high blood pressure, type 2 diabetes, osteoporosis, heart disease, stroke, depression, colon cancer and premature death. Not only that, but those who choose gardening as a moderate intensity activity are more likely to exercise between 40 and 50 minutes longer on average than those who choose more traditional workout methods, such as taking a walk or a bicycle ride.

It likely would not come as a surprise to most that getting your body moving and being out in the fresh air can have positive impacts. But, according to gardeners in the Western New York area, the mental and emotional upsides can be just as immense, if not greater.

Paula Gober is the president of the Hamburg Garden Club, which is a member of the Federated Garden Clubs of New York State Eighth District. She joined the club in 2017 and has held her current title since 2019. The club itself was formed nearly 100 years ago, in 1924, and became federated in 1951.

The club’s membership is large, fluctuating between numbers in the 50s and 60s and that group of people not only shares a love of all that grows, but a mission as well.

“What we do is we kind of support each other in learning about horticulture and how we can use that to beautify the homes in the community,” she said.

The group volunteers time to help out in the village, including working with the library and youth programming, where they not only beautify, but educate. The act of constantly learning within the group as well as educating others, Gober said, is a kind of mental exercise which benefits one’s mind, in addition to the physical benefits of gardening.

Nancy Kalieta has been a gardener all of her adult life and is the director of District Eight of the Federated Garden Clubs of New York State. She was a teacher for 33 years and although she gardened in the summers, she said she did not join a club for a long time and had to learn many lessons about horticulture the hard way. She joined a garden club about 15 years ago and rapidly moved up the leadership ladder to the position she now holds.

She said the benefits of gardening certainly can be physical.

“If you put your hands in the soil, your blood pressure drops,” she said. “You’re bending, you’re lifting.”

But much like Gober, Kalieta said that gardening can improve many aspects of a person’s well-being.

“The biggest benefits are mental and emotional,” she said. “The joy of watching something grow that you started, you get a sense of satisfaction.”

She also gives lectures to help people grow their knowledge of the craft. She often taught in-person before the pandemic, but now passes her wisdom along via video conferences. She said that is an important aspect of being in a garden club.

Both women also said that gardening, specifically within a club, is an emotional boost as well because of the friendships one can forge. Depending on which club one was to look at, members are often retired. Both Kalieta and Gober said that the organizations give people the opportunity to make new friends and form new connections.

“Garden club people are very nurturing,” said Kalieta. “They’re kind people, because if you nurture plants, you’re going to nurture people as well… They care about things like the environment, their plants and their gardens, when they’re growing vegetables, sharing what they have.”

And gardening and garden clubs don’t just improve an individual’s health, but the community’s as well.

Many clubs, according to both women, participate in many community-minded and philanthropic endeavors. That includes going to nursing homes and working with residents, gathering supplies for local shelters, volunteering to beautify public spaces, offering activities for the community and donating to charities with a variety of beneficiaries such as water-based efforts in Sudan or helping communities replant trees that have been lost due to things such as natural disasters.

She also said that her own gardening efforts have brought neighbors to her home to talk about her garden, allowing the chance to meet those in your own community.

For Gober, the act of gardening is something that not only improves a place aesthetically, but improves one’s overall self.

“Aside from making your house beautiful, it makes you beautiful,” she said. “Because you’re happy and healthy.”

Photo: A hibiscus grows in the front yard of Nancy Kalieta’s home.