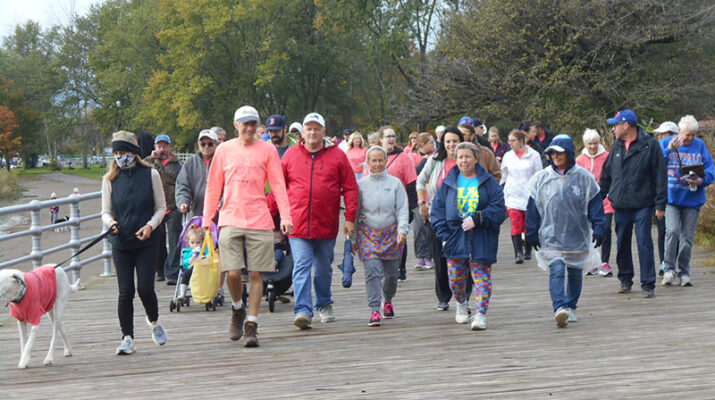 Austin’s Angels are a blessing for The Resource Center

What’s that old saying? When the going gets tough the tough get going?

Well, that’s exactly what Dory Matwijkow did when she heard that the Step Up for Autism Walk, benefiting The Resource Center of Jamestown, was canceled last year. Dory took it upon herself to organize her own walk a bit closer to home in October. She and 70 friends and family members marched the walkways at Beaver Island State Park to raise funds for the center, a group home in Jamestown for people on the autism spectrum.

Dory, whose son, Austin, resides at the center, is a local pastry chef and sells baked goods to friends and family throughout the year and sets aside the proceeds to donate at the yearly walk. She, along with her group known as “Austin’s Angels,” has been walking in various fundraising walks to raise funds for autism awareness and facilities for more than 20 years. In addition to last year’s Beaver Island walk, Dory hosted a baked goods sale and enormous basket raffle and added proceeds from those efforts to her yearly donation. At the end of the day, she was just shy of her goal and close friends and family stepped up to hit the mark. The end result was a donation of $10,000 to The Resource Center; a much-needed donation in a time of crisis during the 2020 pandemic.

This year, Dory had again planned to hold her local Beaver Island State Park walk in addition to participating in the Jamestown “Step Up for Autism Walk,” held by the center. Shortly before their fundraiser was held this September, the center announced that the “Step Up for Autism Walk” would be converted to a virtual walk, erring on the side of caution due to increasing COVID-19 numbers in their area. Dory noted that virtual walks do not produce as many fundraising dollars as face-to-face walks.

“Once I found out that The Resource Center had to convert to a virtual walk, I was very glad I had planned another walk at Beaver Island and I was overwhelmed with the donations that came in,” said Dory. “We live in a very generous community.”

As Dory and her league of Austin’s Angels spread word of the funding challenges in our autism-related community, local artists and corporations stepped up to help. Local optical establishments donated Ray-Ban and Carrera sunglasses for the large basket raffles. Local golf clubs donated golf outings. Roy’s Plumbing donated more than $700 through its “Roy’s Cares” program. Friends and family came out in droves to donate baskets and baked goods.

This October, when Dory and her Austin’s Angels hit the rainy-day pavement at Beaver Island State Park, more than 75 people were at her side. More than 50 baskets were donated to the raffle.

Dozens of pies, cakes and boxes of cookies were available for purchase. The final donation amount this year was more than $12,000. Once again, Dory and Austin’s Angels stepped up when they were needed most. And rumor has it that the Austin’s Angel Beaver Island Walk will now be a yearly event. To find out more about Step Up for Autism and The Resource Center visit them on Facebook.