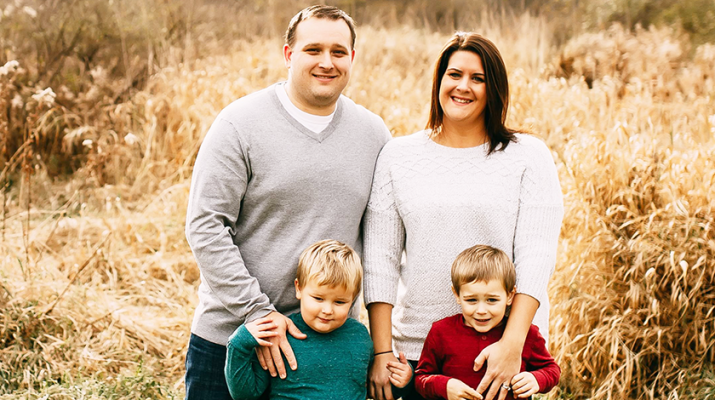 Laura and Brian Moeller’s son was diagnosed with autism spectrum disorder right after his second birthday.

ASD is a developmental disability that affects communication and behavior. It’s considered a spectrum disorder because of its wide range of symptoms and behaviors.

The biggest indicator that Cameron had autism was that by age 2, he was completely non-verbal. As a result, he went to different specialists and doctors for evaluation.

Cameron, who has a little brother, Max, is now 5 years old and is starting kindergarten.

He loves wearing red, Mickey Mouse and is a great little swimmer. He doesn’t like big crowds or too much noise, and works really hard in his speech therapy at school and home.

“There are so many resources, schools and different kinds of therapies for ASD out there, so I didn’t really know where to go after Cameron was diagnosed,” said Laura, who started reaching out to friends and family for help. She eventually connected with Rachael Schneider, the senior clinical director of Autism Learning Partners in Buffalo. It’s a group of licensed behavior analysts that specialize in applied behavior analysis (ABA), one of the targeted therapies for autism.

“ABA is evidence-based tools and resources to change and improve behaviors and applied specifically to autism. It’s where we work on the main core deficits — language, social skills and repetitive behaviors,” Schneider said. “We take data, monitor progress, and change the environment to help a child learn and succeed.”

As Schneider helped Laura explore local treatment options for Cameron, they started realizing how helpful it would be if Western New York families could be linked to the many providers and resources available in one place.

That’s how Buffalo Autism Project was founded in 2017, with Laura as its president and Schneider on the board of directors.

As a nonprofit organization, its mission is to provide WNY families with the best resources and information available on ASD, raise awareness and acceptance, and host local fundraising events.

“Our team is so excited and passionate about what we’re doing. We just felt like there were a lot of people in the community who needed the help and the resources like I did,” Laura said. “One of the biggest things for me is raising more awareness in the community of what ASD looks like. There are so many kids affected by it.”

One of the biggest factors in Cameron’s success has been early intervention in getting diagnosed and receiving ABA therapy every day at school, and three nights a week at home, his mother said.

Meghan Hodgkin is a behavior technician at Autism Learning Partners, and has been working one-on-one with children and teens diagnosed with ASD and other developmental disabilities for almost three years. She teaches skills in the community, at schools and in-home settings. Each of Hodgkin’s clients has unique goals and needs, so sessions are individually tailored. One ABA practice she utilizes is through reinforcement.

“If I were trying to teach a child a new skill, I would pair a preferred item, an activity, or praise as a reinforcer for successful completion of a step in that skill,” Hodgkin said. “Eventually, as they grow confident in completing that skill, they no longer need the reinforcer. This can be used in helping a child feel comfortable in social situations as well, and is just one of the many strategies that fall under the umbrella of ABA.”

Hodgkin has found many joys through her work as a behavior technician. “My biggest joys are improving the livelihood of the children and families I work with, and to see specific goals being met,” Hodgkin said. “The rewards of the work definitely outweigh the challenges.”

According to recent statistics from the Centers for Disease Control and Prevention’s autism and developmental disabilities monitoring network, about one in 59 children has been identified with ASD. It’s about four times more common among boys than girls and can be diagnosed as early as age 2; however, most children aren’t diagnosed until 4.

The fair is one of its concerted efforts to grow annually with help from fundraising efforts.

Participants are encouraged to dress up and prizes will be awarded. Presale tickets are $15.

For more information on the Buffalo Autism Project, visit buffaloautismproject.org or facebook.com/BuffaloAutismProject.

Reach them directly at BuffaloAutismProject@gmail.com.

For more information on Autism Learning Partners, go to autismlearningpartners.com.

Common Indicators Your Child May Have ASD

Although these are not solid indicators, a child who has ASD will show a range of symptoms:

• Speech delays or no speech at all
• Repeating words and phrases
• No babbling by 12 months
• No words by 16 months
• No two-word phrases (not including repeating or imitating) by 24 months
• Loss of speech, babbling or social skills at any age
• Difficulty understanding others’ feelings
• Inability to make friends and build relationships
• Very narrow or intense interests
• Need for routines and sameness
• Hand flapping and rocking