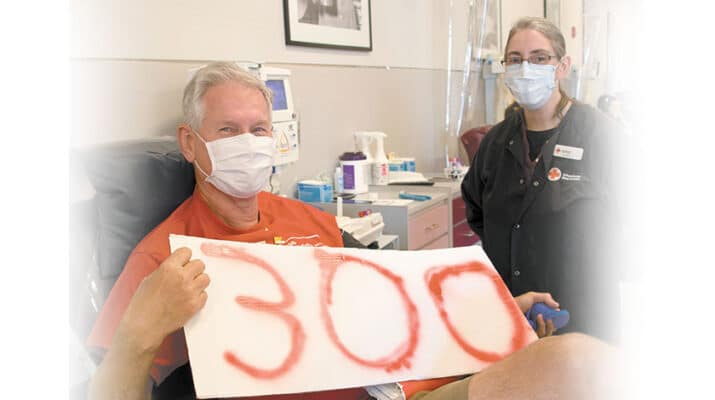 Lancaster resident celebrates 300th blood donations made over the past half-century. “I do it to help someone in need,” he says

Gene Baran has been giving the gift of life for more than 50 years, yet the Lancaster resident says he believes that he is the one who has been repeatedly rewarded over the past five decades.

“For me, giving blood and doing something for another person is such a rewarding experience,” Baran said. “I have always enjoyed doing this and I am actually quite thankful that I still can.”

The 70-year-old Baran recently celebrated a major milestone when he donated blood for the 300th time, an occasion that marked a half-century of volunteerism that has included donations of whole blood, plasma and platelets.

“I have never had any difficulty or suffered from any complications from donating,” Baran said. “I always say that if something comes relatively easy to you then you shouldn’t mind doing it on a regular basis.”

It all began at Fort Gordon, Georgia

Baran first donated blood in 1970 at the age of 19. Serving as a U.S. Army basic trainee at Fort Gordon, Georgia, a drill sergeant was seeking volunteers to donate and enticed potential blood donors with something that Baran said was too attractive to ignore.

“He told those of us willing to roll up our sleeve that we could then lay around in our bunks for the rest of that day,” Baran said. “For a day off, I figured that I’d give it a shot.”

At the time, Baran didn’t fully recognize the important role he played in assisting someone else in need.

“I mean, I was 19 and I honestly don’t think I gave it that much thought after that day off was over and done with,” Baran said. “It wasn’t until later in life when I was working that I began to comprehend how important it is for people to volunteer and stick to a regular donation schedule.”

While working for the New York State Department of Transportation, Baran volunteered to donate as part of a mobile blood drive that took place at his workplace. It was with that donation that Baran began a longstanding relationship with the American Red Cross.

“A very supportive employer helped me to realize after that donation at work that I can make a difference and with that it became a way of life,” Baran said. “My donations just became all part of my regular routine and I have been very fortunate to be able to avoid any serious illnesses or injuries that would have thrown me off my schedule of regular appointments to donate.”

Baran, who retired 11 years ago, has also donated platelets and whole blood at Roswell Park, special occasion volunteer efforts that he dedicated toward cancer patients he knew.

“Roswell Park is great with the free parking perk and it feels especially good knowing you are directly helping people who are battling some form of cancer,” Baran said. As someone who has AB-positive blood, his blood donations are limited in use to approximately 3% of the U.S. population but remain important contributions to the cause. The American Red Cross estimates a little more than one-third of the country’s population is eligible to give blood or platelets, with less than 5% of the nation’s total population taking the time to donate blood at least once a year.

Why give? Why not?

Baran, who has donated nearly 38 gallons of blood, is a passive advocate for the American Red Cross and ConnectLife, meaning he passionately supports their efforts and encourages others to consider donating blood. But he never pressures anyone to make an appointment, choosing instead to follow one of his longtime approaches to life.

“I let my actions speak for themselves,” Baran said. I’m actually the only person in my family who is a regular donor and that’s fine. If someone wants to speak with me about my donation schedule I’m happy to talk with them, but I am not someone who is going to lecture or ramble on about it.”

Baran believes he should never take for granted his ability to stay healthy, including recently as a retiree.

“I do it to help someone in need,” Baran said. “I am eligible to donate blood once every 28 days and I mostly stick to that throughout the year. It is my way of giving back to the community and making a difference in a small way. I look forward to continuing this because I do think we should all give back in some fashion. The donation of blood is an excellent way to do that.”

Photo: Gene Baran of Lancaster recently celebrated his 300th blood donation. “I do it to help someone in need,” Baran says. “I am eligible to donate blood once every 28 days and I mostly stick to that throughout the year. It is my way of giving back to the community and making a difference in a small way.”