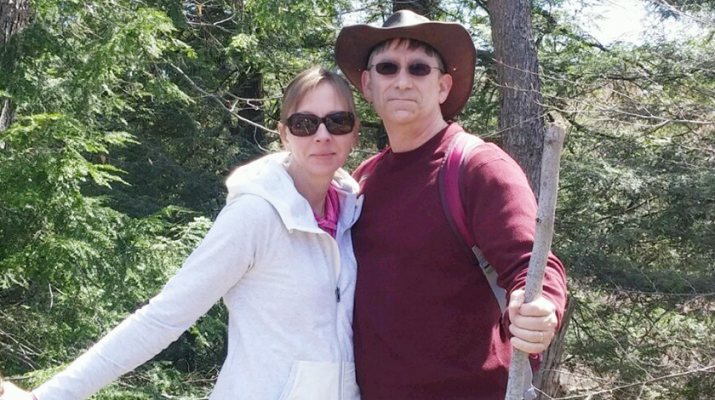 Last March when doctors told Rohleder he had blastic plasmacytoid dendritic cell neoplasm (BPDCN), he was given between 12 and 22 months to live. At 54 years of age, Rohleder is at 23 months since his diagnosis.

Rally for Rohleder, a fundraiser to support Rohleder and his family and to raise awareness of the disease, is being held on April 15 at Classics V Banquet Center in Amherst.

His only treatment option is in Boston, 500 miles away from their home in Maryland, and is experimental. The financial burden and time away from work are taking a toll and his wife’s Tricia’s best friend, Laura Matre, and her sister, Marian Pilecki, started planning the fundraiser in Buffalo after they heard the news. Money raised will help cover the cost away from work, treatment and travel. The Rohleder used to live in Buffalo and Tricia still has family here.

“We knew we had friends and family but we’re really feeling it now. It’s a big blessing. We are overwhelmed with the donations they’re giving away,” Tricia said. “An afternoon on a sailboat, an afternoon of charter fishing, rinks of ice donated and signed hockey sticks from the Sabres.”

Rohleder works for the US Marine Corp, and Tricia, an elementary school teacher, quickly learned there is no established treatment that results in long-term remission for BPDCN, and little data on the disease is known.

Initially, small spots started appearing all over Rohleder’s skin, a symptom common in 80 percent of diagnoses. He went to a dermatologist and had a skin biopsy, which confirmed BPDCN.

His father, William Rohleder, is a retired marine captain who was stationed at Marine Corps Base Camp Lejeune in Jacksonville, N.C., in the ‘50s and ‘60s. Rohleder was born at the base hospital and lived there about four years.

According to the U.S. Department of Veterans Affairs, in 1982, volatile organic compounds were found in wells that supplied Camp Lejeune’s drinking water — mainly trichloroethylene, a metal degreaser; perchloroethylene, a dry cleaning agent; vinyl chloride; and benzene. The contaminants are estimated to have been in the water from the mid-‘50s until February 1985 when the wells were shut down.

According to the Center for Disease Control’s Agency for Toxic Substances and Disease Registry Public Health Assessment for Camp Lejeune, “One million military and civilian staff and their families might have been exposed to the volatile organic compound-contaminated drinking water during a 30-plus year period. However, because during the early 1980s these contaminants were unregulated, base officials took relatively few drinking water samples to measure chemical contaminants at the base’s water treatment plants; therefore, the extent and duration of exposure was unknown.”

Three years ago, Rohleder and Tricia received a packet in the mail disclosing that there was contaminated drinking water at Camp Lejeune during the time he lived there with a list of deadly diseases potentially caused by exposure. Rohleder’s mother died of colon cancer at 60, and his father has been surviving multiple cancers for the past two decades.

They sent a claim in to the military and it was sent back requesting more proof of residency, even though the Rohleders sent in a copy of Rohleder’s birth certificate and dates and addresses of where he had lived on the base. According to the family, they don’t know anyone who has received compensation for the deadly diseases caused by the contaminants.

The Rohleders, along with many others, have been looking to the military to take active responsibility for the contaminated water and financially compensate those affected, both with their medical expenses and treatment, as well as for those who have already lost a loved one due to one of the deadly diseases caused by exposure.

According to The Dana Farber Cancer Institute, BPDCN is a rare, aggressive disease of the bone marrow and blood cells typically diagnosed in people between 60 and 70 years old. There are few effective treatment options, and with a wide range of symptoms and little data, BPDCN is frequently misdiagnosed and underreported. It decreases the red blood cells, white blood cells, and platelet counts in the body and can evolve to the bone marrow and spleen. Symptoms vary but include skin lesions, enlarged lymph nodes, fatigue and stomach pain.

Director of BPDCN Center at the Dana Farber in Boston, physician Andrew Lane, is administering Rohleder’s treatment. According to a letter Lane wrote on behalf of Rohleder, “He may have been exposed to toxins in the drinking water, including benzene, trichloroethylene, tetrachloroethylene, dichloroethylene, and vinyl chloride. Some of these chemicals are associated with an increased risk of cancer, including leukemia. In my opinion, it is possible that these exposures could have contributed to his current disease. The VA Hospital does not offer any known cure for this type of leukemia, nor the experimental drug that has proved the most successful.”

Rohleder started the first phase of treatment, SL401, in May, which is experimental and in its third leg trial before the FDA reviews it for approval. After that, he had full-body radiation, and then a stem-cell transplant where his immunity was eradicated and replaced by his sister’s, who was his donor. Now, he has her immunity.

“In Boston, they’ve treated the most people with BPDCN, and they’ve saved one person. We are planning on my husband being the second,” Tricia said.

Although Rohleder is not part of any support groups he said he certainly has support. “I have a lot of support from my wife and I rely greatly on her. She’s my rock and we both rely on family,” Keith said.

There will be food and refreshments, entertainment, theme baskets, specialty raffles and 50/50 split.