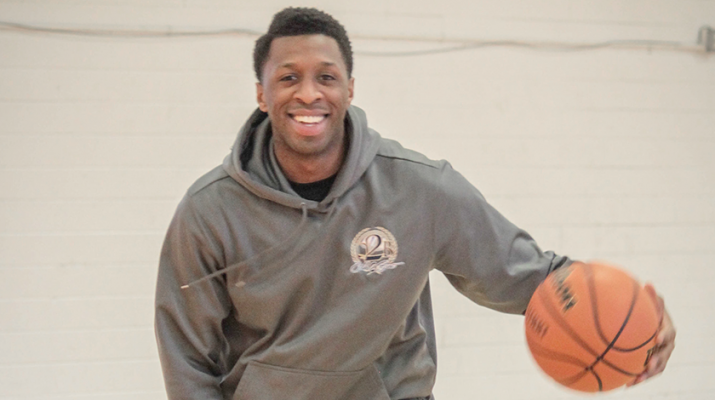 Gregory Gamble II, who played semi-professional basketball, has founded a company (Odds2Beat) that offers a variety of training

That’s why Gamble focuses not only on developing basketball skills in his clients, but character and life development as well.

He sees the two going hand-in-hand: a solid basketball game, he says, can be a vehicle for one’s education and career goals.

“As a student-athlete, you can use those skills to get opportunities that might not have been there for you,” Gamble said.

His training model, and general outlook, is heavily shaped by his own experiences coming of age.

Gamble grew up with four siblings in the city of Niagara Falls. His parents worked and supported them well, but did not hold four-year degrees themselves. He said they didn’t talk much of higher education.

But Gamble was a star basketball player, helping lead the Niagara Falls High School’s team to a state championship and national prominence in 2005. They were considered one of 10 high school basketball squads across the nation that could potentially beat an NCAA-level team, he said.

His skills in the court landed him a full scholarship to the University at Buffalo. However, without a clear life plan before him, he struggled in college.

His first semester he majored in economics and saw his grade point average fall to a 1.25.

“My main goals are based off my own life experiences, which is just being uninformed,” he said.

He changed to a communications major and pulled his grades up. After graduation, he played in a semi-professional league for two years, then decided to return to school, attending Medaille College for his Master in Business Administration degree.

“I want to help student-athletes be equipped for college and understand you need a plan for college,” he said.

As for his work in the court, Gamble says his lessons push three main points: strength and conditioning, IQ (as in knowledge of the game) and building skills.

“I push the message that you got to do things over and over to succeed,” he said.

He aims to help teens and adults who might not have the time or funds to pursue basketball training with a personal trainer.

“I’ve made it affordable for the working mom or young adult who can’t invest in basketball training, but does have 45 minutes and wants to have fun and wants to get in a workout,” he said.

Meanwhile, Gamble also runs after-school programs for seven area schools, where he works with students from grades 2 through 12. He aims to develop skills and teach the fundamentals of basketball — and, of course, to give the students a fun time.

To that end, he has invented several games that combine fundamentals of basketball — connect four with basketball, tic-tac dribble and what he calls “switch-ball,” a kind of kick ball in which the kicking is replaced by shooting from the free throw line.

His hope is that his students someday can use their skills in the court to land scholarships and life opportunities that may have otherwise been out of reach.

“My job is to empower and employ,” he said. “I want to help student-athletes see sports are a vehicle that can be used to get from opportunity to opportunity.”

His company, Odds2Beat, offers a variety of programs to all age groups — all centered on basketball.