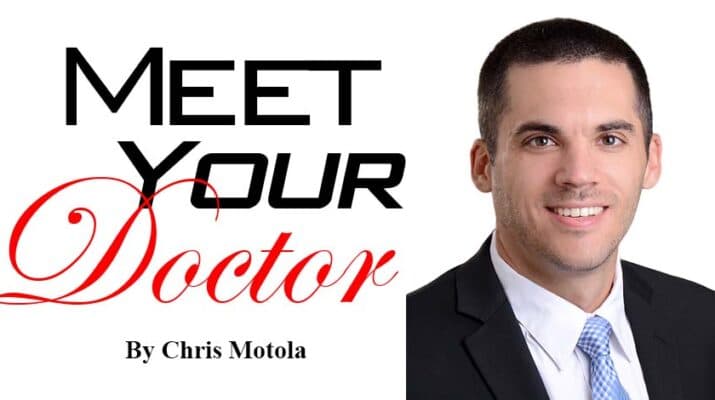 Q: What kinds of conditions would fall under the category of movement disorders? It’s pretty wide-ranging, but the majority of patients I see have Parkinson’s disease. Tremors are also very common, specifically essential tremor disorder. But there are other, more wide-ranging movement disorders like dystonia, ataxias and diseases where there’s abnormal involuntary movements.

Q: What causes movement disorders? Do the problems originate in the brain or another part of the nervous system? With Parkinson’s disease, there’s a loss of dopaminergic neurons that receive a neurotransmitter called dopamine. As they degenerate over time, patients will begin to experience the symptoms of Parkinson’s disease. With some other movement disorders we deal with, we don’t always know the true pathology behind it, but with Parkinson’s we do know it’s related to dopamine and we know what part of the brain is affected.

Q: I understand you have an interest in something called deep brain stimulation. How does that work? So far [with] Parkinson’s disease, we try to split it up into two categories. One is motor symptoms, the other is nonmotor symptoms. Early on in the disease, the motor symptoms are the most troublesome. We do have medications that can help with symptoms. None of our medications, unfortunately, slow down the progression of the disease, but they can be very helpful for symptom control. Everyone is a little bit different, so it’s important to have individualized approaches for determining which medications may be more helpful than others, what type of dose is appropriate, or how frequently the medication should be taken. It’s important that it can be adjusted over time as well. There are also some nonmotor symptoms. Things like mood, cognition. With a select few patients we’re able to have them undergo deep brain stimulation. We target an area of the brain where we can provide electric activity, which can result in improved motor symptoms. There’s a pretty comprehensive evaluation, and we try to pick patients who it will help the most.

Q: You mentioned there wasn’t currently any way to stop the progression of Parkinson’s disease. Are there any promising treatments on the horizon? Currently we do not have any medication that slows the progression, but there is a lot of research being done. We’re constantly looking for biomarkers and things we can measure to see what changes and how much during disease progression, and to find disease-modifying agents. Hopefully we’ll undercover one.

Q: You’re originally from Buffalo and have ended up practicing here. What are some of the things you like about practicing neurology here, specifically? I think just being from Buffalo, having these resources in my backyard, has been great and very rewarding. I’ve been lucky enough to have a lot of mentors and people within neurology who have helped with my training and given me career advice. It really was a no-brainer for me. I have family here. I want to help patients in Buffalo and my community, so it’s been a great start.

Q: What is dystonia? It’s a large group of disorders. It’s pretty much diseases of abnormal muscle contractions. They can affect one area of the body or be generalized. One type I often see is cervical dystonia. We can provide treatment with botulinum toxin injections, which can help with this disorder. There are also some medications that can be helpful for these patients.

Q: How does botulinum toxin help? Does it paralyze the muscles being targeted? The goal of it is to try to weaken overactive muscles and make them more balanced. Sometimes there are tremors involved with the muscle contractions and it can help with that. Basically we use it to try to improve the patient’s quality of life.

Q: Generally speaking, are movement disorders age-related? It depends on the disorder. Parkinson’s tends to affect people over the age of 50. Essential tremor disorder can affect patients when they’re younger, even in their early adult life, but it can also can start later in life as well. So there’s a heterogenous population, but typically with Parkinson’s it’s more late onset. Though you do see early onset here and there.

Q: How do you go about diagnosing a disease like Parkinson’s before it’s progressed to an advanced level? With Parkinson’s disease there’s no blood test or imaging that will detect it. So a lot of it is based on clinical examination. We look for certain features like tremors. When does the tremor occur? We look at the speed of movement, how the patient walks. And we try to piece it all together. Sometimes in their history there are some features that tend to go along with Parkinson’s disease. So it’s important to get a very good history and perform a complete neurological exam.

Q: How can patients maintain the health of their neurological systems? For our patients aerobic activities are very helpful. We also encourage exercise that strengthens core muscles for balance. We want to keep our patients ambulatory and independent for as long as possible, and to help them avoid damaging falls. I think it’s also important with Parkinson’s disease to have a very strong support system, to network and to not have a sedentary lifestyle. One thing that’s rising in popularity is Parkinson’s boxing. Having better balance and control of big movements can help patients.

Q: So is that meaning learning actual boxing movements? You’re not actually boxing someone, but it does involve putting on the gloves and get taught different types of movements that may be helpful for balance. And learning to move more smoothly with bigger amplitude movements. There are a couple places in Buffalo that do it, and there are a lot of places throughout the country.