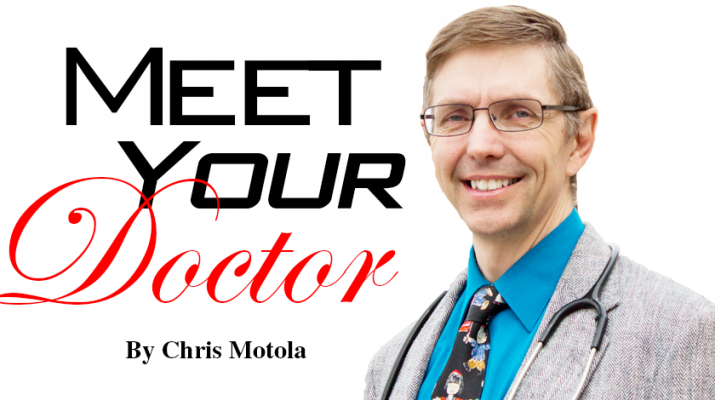 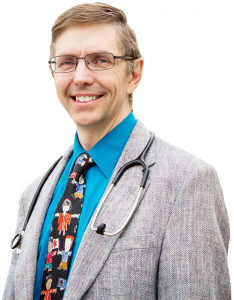 Q: Your practice spans a lot of different areas, I understand.

A: I’m a family physician at ECMC Family Health Center. We train residents and medical students. It’s a busy clinic. I also do some addiction medicine at a different site, mostly opioid addictions. So we use Suboxone to help with that. I have a program I developed where patients choose if they want to be in a secular- or faith-based program; and in both programs do journal writing, read books, answer questions in a workbook. That’s in addition to their counseling programs and Suboxone treatments. I do some volunteer free clinic work in Buffalo and inpatient work at ECMC at the county hospital, and inpatient pediatrics at Oishei Children’s Hospital. And I also do obstetrics, so I deliver babies at the children’s hospital as well.

Q: And your work on global health?

A: I’m the director of the global health education program at the university. Our medical students went to four different countries recently doing medical relief work: Haiti, the Dominican Republic, Costa Rica and Panama. Those are the first-year students. For senior medical students, they can go almost anywhere in the world as an elective. It’s usually only one or two students at a time.

Q: You mentioned your faith-based work briefly, and I understand it’s a big part of your work. What do you believe the role of faith is in health?

A: The idea was around for a long time, but it was in the 90s that they started doing research into the area. A lot of studies found a positive correlation between faith and health. One study with over 20,000 patients in it looked at length of life and found that those who attended religious services more than once a week, on average, lived seven years longer than those who never attended services. The difference for the African American population was even higher, at 14 years. Some of that may be the social benefits.

Q: Did they compare it to other social activities?

A: There was another study that compared volunteers in secular organizations to religious service attendees and there was a difference in favor of religion. Those who did both lived even longer than those who just attended religious service. There’s not a big difference in terms of, say, cancer survival, but there’s a huge difference in terms of quality of life, incidences of depression and coping. There have also been some studies into chronic pain and faith showing faith does sometimes help with some of the chronic pain issues. Again, some of that is the social aspect, but faith itself did seem to help people cope with pain. At the addiction clinic, a lot of our patients got addicted trying to treat chronic pain, so we have some people there who have benefited.

Q: How do you break the topic of faith with patients?

A: Now, my job isn’t to push religion on people, it’s to help assist patients in improving their health and well-being. I can do that with a prescription, a procedure, with counseling. I consider faith as another tool. There may not be a need or it may not be appropriate with everybody. I basically just ask patients what’s important to them. If they say faith, I ask how so. If it’s not important, we go on to other topics. I’ve found that for people for whom it is important, they appreciate it.

Q: Do you run into a variety of faiths? How do you deal with different ones?

A: Where I am in Amherst, if patients are religious, they’re usually Christian. There are others who called themselves spiritual but not religious that we see. Some people have an overwhelming sense of religious guilt, though, and in those cases faith can actually be hurtful. You can try to address that with people as well.

Q: Where do you think the line is between faith as a supplement to medicine and faith-healing?

A: I have a patient who told me he stopped taking his blood pressure medicine because people at church were praying for him. He’d been off the pills for about two weeks when I saw him. His blood pressure was OK, so I said, “Your blood pressure is OK now, but if your blood pressure starts going up again, I’m going to recommend you go back on the pills.” He was also a smoker, so I suggested his church pray for him to stop smoking to help his blood pressure, but he clearly wasn’t ready to stop smoking, so he didn’t like that idea. Another patient was diabetic and felt she was healed, so she stopped taking her insulin, had a reaction and got into a car accident. So they consulted me to help manage the diabetes. The challenge with a lot of these healing services is they tell you in order to be healed, you have to have faith and to show your faith you have to stop your medicine. So it’s kind of a Catch-22. What I told her was that God can heal, but in her situation she was not healed. She still had the diabetes. And my recommendation was that, until she was healed, to keep taking her insulin. In other words, take it until you’re healed, don’t stop it and hope you’re healed. She seemed to understand that. I will often ask patients if they want me to pray with them.

Q: Is it hard to figure out where people’s boundaries are with something as personal as faith, or lack thereof?

A: My guideline is that if I’m 95 percent sure someone would be OK with me asking, then I’ll ask them. I mean, we’re trained to ask all kinds of personal questions about a person’s sexual history, but for some reason when it’s comes to someone’s spiritual history, it’s kind of taboo. But now there’s some movement in medical schools to train physicians to take a student’s spiritual history. It’s just a few simple questions that can give you a quick idea of where the patient is at.