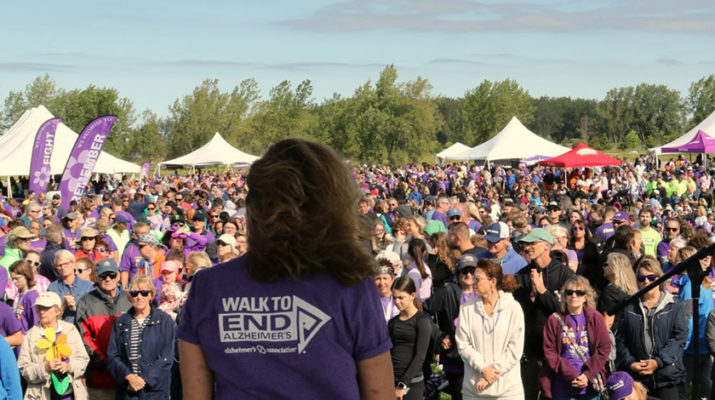 Does it seem like many organizations and individuals you know are taking part in some sort of fundraiser for the Alzheimer’s Association?

It’s just not an impression. The Western New York chapter offers numerous opportunities for the community to become involved.

Since dementia is the fifth leading cause of death in the U.S., it’s vital to both fund research and provide help for those affected and their families.

“The signature fundraising events that our chapter hosts support and engage our Western New York community on many levels,” said Lynn Westcott, director of corporate relations for the chapter.

“They raise needed funds to keep our programs and services free to those in need of care, support and information to manage the disease,” said Westcott. “They also advance vital research efforts so we can reach our goal of our first survivor of Alzheimer’s. And they provide an easy entrée for the community to learn about us, to utilize services, volunteer, join our advocacy efforts, and/or partner with us through corporate initiatives.”

The Walk to End Alzheimer’s is the world’s largest event to raise awareness and funds for dementia care, support and research. It has been held annually for 30 years. More than 600 communities nationwide participate. The Western New York chapter hosts Walks for the six different counties.

Altogether the chapter raised $800,322 through Walk to End Alzheimer’s this year.

“We’re a part of the Walk to End Alzheimer’s because we want to bring love and hope and encouragement to families — just like ours — that have been affected by Alzheimer’s and other dementia,” said Neil Boron, on-air host at WDCX Radio in a statement. “We also want to help provide for the needs of the Alzheimer’s Association in advocacy, education, research, support, respite care, etcetera, but most importantly, we want to help find a cure and end Alzheimer’s forever.”

Another corporate sponsor is the law firm Cellino and Barnes.

“Many diseases that tormented mankind for centuries were thought to be impossible to stop, from smallpox to tuberculosis to diphtheria to polio,” said Steve Barnes, a partner. “Now science has eradicated these and many other ‘incurable’ diseases.’ Together we will add Alzheimer’s to this list.”

“Many diseases that tormented mankind for centuries were thought to be impossible to stop, from smallpox to tuberculosis to diphtheria to polio. Now science has eradicated these and many other ‘incurable’ diseases.’ Together we will add Alzheimer’s to this list.”

Steve Barnes, a partner at law firm Cellino and Barnes, and a sponsor of causes related to Alzheimer’s disease.

Whether it’s a karate school kicking for the cause, a knitting club making a scarf in a day or a baking company baking for a cure, the events put the “fun” in fundraisers. Participating groups can choose to seek pledges and/or sell items to raise funds.

The Alzheimer’s Association also hosts RivALZ, a flag football game “to inspire fundraising, awareness and action in the fight against Alzheimer’s disease,” the organization’s website states.

The Western New York chapter’s services include 24/7 helpline, care consultations for families affected by dementia, support groups for caregivers, social activities for individuals with dementia and their care partners, and educational programs.

The Alzheimer’s Association’s free multilingual helpline provides reliable information and support to those in need of assistance 24 hours a day, 7 days a week: 1-800-272-3900.

Every 65 Seconds Someone Develops Alzheimer’s Dementia in the U.S.

The Alzheimer’s Association shares facts on the disease:

• Alzheimer’s is the most common type of dementia, which accounts for about 80 percent of dementia cases.

• Dementia refers to a decline in mental ability severe enough to interfere with daily life.

• According to the Alzheimer’s Association 2019 Alzheimer’s Disease Facts and Figures Report, every 65 seconds someone in the United States develops Alzheimer’s dementia.

• More than 400,000 individuals live with Alzheimer’s dementia in New York state. This number does not include individuals with other types of dementia.

• More than 1.6 million New Yorkers provide unpaid care to their loved ones who live with dementia.