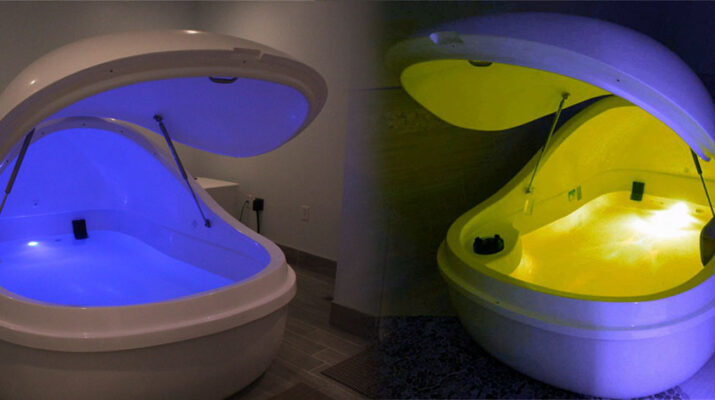 The tension and stress caused by this pandemic are evident right now. With fear and uncertainty looming all around, we could all use something to calm our nerves and boost our well-being.

Flotation therapy may be just the ticket to alleviate some of the tensity felt during these unprecedented times.

Flotation therapy is a holistic treatment that allows a person to float in warm Epsom salt water inside a special tank.

Referred to as “sensory deprivation tanks,” they are designed to remove outside distractions. This term feels daunting at first, but when opening up to the idea of closing the world out for a while, it becomes more inviting.

This therapy has become increasingly popular as its multiple health benefits have been further studied and confirmed. Many spas and float centers offer this experience worldwide.

Here in the Buffalo area, there are now four centers that specialize in this therapy: The Flo, Float 18, Ascend Float Spa and Silver Essence Floating Spa.

Each center puts its own personal touch on things, but they all have one thing in common: to help people discover the mental, physical and spiritual benefits this unique experience offers.

The water inside each tank is heated to body temperature and infused with up to 1,000 pounds of Epsom salt. The softened water creates the feeling of weightlessness, giving the body a break from the strains of gravity. The tanks give the mind a break from the constant daily exposure of lights and sounds.

Matthew Daily, an employee at The Flo, describes floating as “a little mental vacation.”

After being stuck at home the past several months, “you build different types of anxiety and stress. This gives you a chance to have a little bit of clarity,” Daily says.

As clients begin to relax into their sessions, the creative part of the brain takes over the rational. The subconscious mind overrides the constantly thinking mind, giving people a break from the world and even from themselves.

The benefits of floating are best achieved over time and several sessions. It is a cumulative process. The more someone floats, the more they will experience an overall reduction in stress, pain and anxiety.

Scott Stambach, owner of Float 18, explains this process further. In your first session, “there’s a lot to deal with in order to get to a relaxed state of mind where your brain waves actually change and your endocrine system adapts. You’re switching over from the sympathetic to the parasympathetic nervous system. That might take a couple of times,” he says.

Stambach is also a physician’s assistant who understands the consequences that our daily demands have on our health. “If you consider the biggest forms of disease that we’re facing now — from heart disease to anxiety to depression — the majority of them are from the fact that we are constantly in fight or flight mode, or the sympathetic nervous response,” Stambach says. “Our endocrine system is charging us up constantly to the point that even when we’re not having that stimulation, we’re addicted to it in a way that we’re searching for it. We feel uneasy because we don’t have it.”

According to Stambach, floating reduces the production of cortisol and increases the production of endorphins. It promotes mental clarity and enhances creativity and problem solving. It alleviates pain, boosts immune function, improves circulation and lowers blood pressure.

Katrina Avent, a registered nurse, opened Ascend Float Spa in 2019 and has been helping people to reduce pain and stress ever since. Her delivery of this service is based on her own personal experience as well as the evidence of its health benefits.

“When I first floated, it was the mind, body and spirit healing — the whole person healing. It changed my life,” she says. She knew from that moment on that she wanted to help people by offering this alternative treatment for pain and stress management.

“The Laureate Institute for Brain Research has been studying the effects of flotation for over 10 years,” Avent says. In these studies, “they are showing the physiological benefits are that the heart rate drops, diastolic blood pressure drops, and the respiratory rate gets slower.”

The float tanks typically provide an environment free of light and sound. Whereas The Flo offers a purer version of this sensation, Ascend and Float 18 have different types of tanks or “pods” to appeal to the more hesitant client.

These pods provide the ability to choose different colored lights that can remain on or off during a session. Ascend’s pods also play music for the first and last five minutes of a float. They are even customizable to someone’s own music so that it can play under water to enhance their experience.

For those that may be claustrophobic or put off by this deprivation, each center has the option of leaving the door cracked or open to ease any fears. Ascend also has a small room known as the “wave room” where individuals can float.

Each spa makes sure that every room and tank is clean and sanitized. They have special filtration systems which allow the tanks to self-clean before and after every client. Every room is equipped with a shower, fresh towels and any toiletries needed before and after the process. As it is a solitary activity, social distancing is easy to do.

Where to Float in Buffalo

The average session is 60 to 90 minutes and the prices range from $55 to $70. Every center offers membership packages with special rates, as well as first-time floater promotion codes that can be found on their websites.

Photo: Left: Flotation pod at Float 18 in Buffalo. Owner Scott Stambach, a physician’s assistant, says floating promotes mental clarity and enhances creativity and problem solving, among other benefits. Right: Flotation pod at Ascend Float Spa in Buffalo. The business has been in operation since 2019. “When I first floated, it was the mind, body and spirit healing — the whole person healing. It changed my life,” says Katrina Avent, a registered nurse, who owns the place.