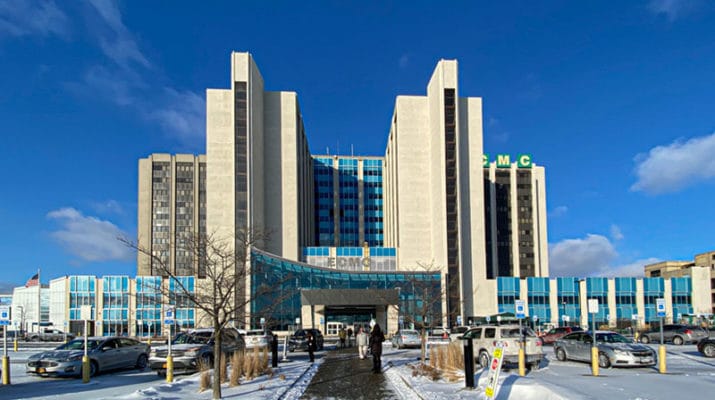 Three years ago on Valentine’s Day, Buffalo restaurateur/philanthropist Russel J. Salvatore announced that he was committing $1 million to ECMC’s capital campaign. Thanks to his early support of that effort, ECMC has raised nearly $15 million from private sources for the capital campaign, which includes the building of a new state-of-the-art trauma and emergency department, as well as other capital improvements at the hospital, including the new main entrance.

In July 2014, Salvatore donated $500,000 that led to the opening of the Russell J. Salvatore Orthopaedic Unit in 2015 on the sixth floor of ECMC. He had also previously in 2012 donated $250,000 to upgrade televisions in patient rooms throughout the hospital.

“I believe in ECMC’s mission and I am proud to support their lifesaving services for the residents of Western New York,” Salvatore said. “I have experienced firsthand the high level of quality care that the ECMC staff provide to their patients, at every level throughout the hospital. Their culture of caring is second to none and I wanted to reinforce my admiration for their healthcare excellence by supporting them for the capital campaign and in other earlier hospital improvement projects. I am particularly honored that the hospital’s new entrance will be known as the Russell J. Salvatore Atrium.”

ECMCC Board Chairman Jonathan A. Dandes said, “On behalf of my fellow board of directors at ECMCC, we are truly grateful for Russell Salvatore’s longstanding support and generosity to ECMC. In the early stages of our capital campaign, he made a commitment of $1 million that absolutely spurred subsequent donations that have had a significantly beneficial impact now and for the future of ECMC.”

ECMCC President and CEO Thomas J. Quatroche Jr., Ph.D. said, “ECMC is truly fortunate to have such a steadfast supporter and friend in Russell Salvatore. Over the years, Russell has repeatedly demonstrated his love and admiration for our ECMC family and our dedicated caregivers in turn have always been deeply thankful for his unwavering support. Thanks to Russell, we have literally transformed ECMC’s ‘front door’, providing a warm and welcoming environment for patients, their families and visitors.”

• Stone accent panels on the interior and exterior walls

• Covered carport for drop off / pick-up