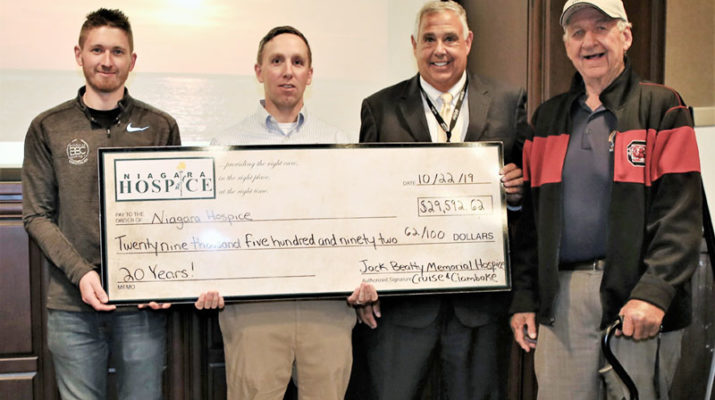 To improve the comfort level of family members, caregivers and guests, Niagara Hospice announced that all 10 general-inpatient rooms and all 10 residential units at the Niagara Hospice House received new Wieland sleeper sofas, providing flexibility and convenience during patient visits and overnight stays.
The multi-purpose sofas, manufactured by Wieland of New Haven, Indiana, are called “Sleep Too” and feature two seating areas separated by a table that can be raised. The bed portion folds down easily with the push of a button.

“The new sleeper sofas create a family room setting while ensuring guests are available and active by offering a unique space to work, eat, play games, recharge personal devices or rest while not missing an opportunity to consult with staff or assist their loved one,” said Janet Ligammari, director of hospice facility services at Niagara Hospice.
The purchase of the new sofas was supported by nearly $30,000 in proceeds from the 20th annual Jack Beatty Memorial Hospice Cruise & Clambake held July 12. More than 300 people attended the event, which had to be relocated from the Youngstown Yacht Club to Porter-on-the-Lake Park due to the flooded shoreline.
The couches that were replaced were part of the original furnishings installed when the Hospice House opened in June 2007. Niagara Hospice has donated several couches to the Salvation Army and Goodwill and will continue to distribute the remaining couches to other organizations.