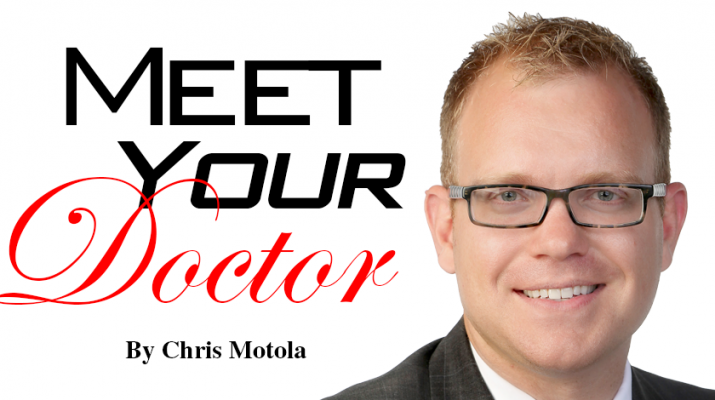 A: I’m an emergency physician and I also do emergency medical services, like pre-hospital care stuff. I work at a variety of hospitals, mainly for Kaleida Health and Erie County Medical Center. My clinical practice reaches from community hospitals to downtown hospitals. I’m also an assistant professor at the University of Buffalo. I’m also the assistant medical director for Mercy Flight. We also have five helicopters and a Learjet. We do inter-facility transports. I’m also working a lot on addictions and the opioid crisis. Those are kind of my main things.

Q: In what capacity are you usually dealing with opioid patients?

A: I’m seeing them in the ER mostly. So most of them will be coming in with withdrawal symptoms or they’ve overdosed. The way I look at it, the people I’m seeing usually aren’t the ones in counseling or in treatment, so this might be the only opportunity this person’s had to interact with a medical professional, especially if they’ve overdosed. So I take that time that I have with them very seriously and try to affect some change on them. So I’ll offer them some medical advice, but also try to offer them an opportunity to get connected to a treatment provider to help continue their care.

A: That’s how most of it starts, although people get into heroin or fetanyl pretty easily. Actually, the majority of cases lately are people injecting fetanyl, thinking it’s heroin.

Q: What are you able to do for these patients, in terms of interventions?

A: Traditionally there’s been a cocktail of medicines that targets some of the symptoms they have with opioid withdrawal. But really, medications that are gaining popularity are buprenorphine and suboxone. That’s called medication-assisted treatment. So we’re trying to find ways to incorporate them into emergency rooms around Western New York.

Q: Beyond the intervention itself, what kind of impact do you think you can have on them?

A: The big picture is getting people to realize the severity of their illness. The fact they’ve overdosed can be a wake-up call, if there is such a thing. So I think we can be pretty effective so long as we have a way to get them on the right track right away, like getting them linked with a provider right as they leave the ER, as well as giving them medicines that will make them feel better right away.

Q: How do you help someone who has overdosed?

A: We’ve worked very hard to get Narcan out in the community. We’ve put it in the hands of police officers, firemen and first responders. So Narcan is pretty available. The good news is that most overdoses have been treated with Narcan before they get to us. Now, occasionally patients will come in unconscious or require resuscitation here. In that case we can put them on a ventillator or whatever else we need to do.

Q: Is this something a particular hospital in the area is specializing in?

A: It’s more the group, UBMD Emergency Medicine, which staffs seven hospitals, than any particular hospital. Erie County Medical Center has kind of been known as the addiction’s place for awhile now. That is because they have inpatient detox, psychiatrists that work there, as well as drug and alcohol counselors who work right in the ER. They’ve kind of led the charge. We’ve realized that someone should be able to get similar treatment even in hospitals that don’t have these kinds of resources. So we’ve tried to have our emergency medicine doctors to be able to provide this kind of care no matter where they’re working.

Q: How do you go about training first responders to use Narcan, particularly the ones who aren’t medical professionals?

A: I’ve held courses for police officers and firemen in the use of Narcan. Basically, we train them to recognize the signs of an overdose and how and when to use it appropriately.

A: It’s one of the few true nonprofit helicopter companies left in the U.S. We provide air and ground critical care transport across Western New York and Northern Pennsylvania. We also have a jet for transportation all over the country for critically ill patients. We’re happy to be able to provide the service as a nonprofit and keep things reasonable for patients. We’ve been around for 36 years and Doug Baker, our founder, still works there almost every day.

Q: Are most of the flights bringing patients to Buffalo?

A: Yes, or Rochester. These are trauma patients, or patients who are having heart attacks or strokes. So if you have a heart attack and you live far away from a hospital we can, in theory, land a helicopter in your backyard and take you to a specialist right away. People usually think of helicopter lifts as being just for trauma, but we do a lot more than just that.

Q: How do you prioritize who gets an airlift?

A: In most cases the first responders decide. If a police officer gets to an accident scene and thinks it’s bad enough, for example.