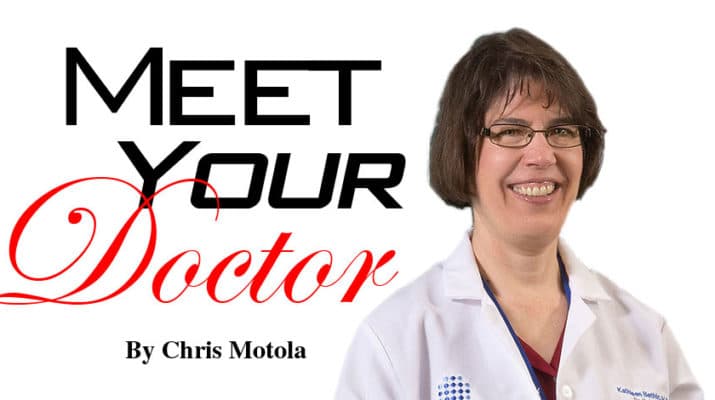 Q: What kinds of hormonal issues do you treat in children?

A: About half of our patients have Type 1 diabetes, the other half have a mixed bag of hormone problems, including thyroid disease, growth issues — parents who are concerned about how short their kids are , hypopituitarism, which is an under active pituitary gland, and differences in timing of puberty, which is the failure to produce when children start making more sex hormones. About 10% of our patients with diabetes have Type 2 diabetes.

Q: You’ve been working in trials with a fast-acting insulin drug Fiasp (insulin aspart injection) that seems well-suited for juvenile patients. Can you tell us more about it?

A: Yes. It’s basically an ultra fast-acting insulin, but they’ve added an ingredient that causes it to be absorbed quicker so that it is approved to be used up to 20 minutes after you start eating.

Q: What does that mean?

A: For children, that’s great, because younger kids especially don’t know what they’re going to eat. Insulin is most effective before you start eating. If you give, say, a 2-year-old with diabetes their insulin, they quickly learn that if they don’t eat the healthy food, mom and dad will bring out the candy so they don’t go low with their blood sugar. So, it works closer to how  human insulin works in people without diabetes. Basically, people without diabetes start thinking about food and their pancreas starts secreting insulin.

Q: Does that mean you have some control over the amount of insulin you have in your system?

A: Not really. Your body does it without any prompting from your conscious brain. I don’t think anyone knows what the signal is that causes your pancreas to start shooting out insulin, but studies have shown that your pancreas starts preparing for that meal.

Q: What are some of the results of the study as far as outcomes go. Are the children healthier?

A: Well, there’s no long-term data on it as of yet. We participated in the trial and the patients who ended up on the drug loved it. The onset is much quicker, but it’s also turned off much quicker. Potentially you can have fewer lows after eating. We didn’t see any differences in the clinical trial. What we saw was that Fiasp given after meals was just as effective as fast-acting insulin aspart (Novolog) given before meals. So the aim of the study wasn’t to show that anything was better, it was to show it was at least equivalent, and that’s what the study showed. Our patients who have been on insulin really like it, but it hasn’t been on the market long enough for us to have any long-term data. It was approved for adults in 2017 and just approved for kids in December 2019.

Q: Type 1, of course, is something you have for life. Is Type 2 reversible when it appears in children?

A: It can be, but Type 2 in kids is much more aggressive than it is in adults. Sometimes we can’t tell the difference between types at diagnosis, so the Type 2 kids get put on insulin. If their numbers get better, we try to wean them off insulin, but a lot of them we can’t get off insulin. We do have some patients who started eating healthier and exercising more. They were able to stay off the insulin, but most of them aren’t perfect, they’re just under control without insulin. So, it’s not completely reversible but can get significantly better in some of the children.

Q: What kinds of interventions are possible?

A: In the mid-90s data came out showing that the lower the hemoglobin A1C, which we measure every three to four months in people with diabetes,  the less likely you were to have complications. We now know it’s more than just the hemoglobin A1C, it’s also the variability of your blood sugars. So, we know the closer we can get blood sugars to normal, the less likely we are to  have complications. We are trying to get their numbers better using different tools like continuous glucose monitors , which tell you what your glucose is doing every five minutes without having to poke your finger. A lot of parents really love this. I would also say that most of our patients end up going on insulin pumps, which allows us to do finer dosing than we could with injections. It’s still very challenging because some parents give too much responsibility to their children, and with teenagers, parents just don’t have as much control.  The teens’ frontal cortex isn’t fully developed yet, so they don’t see long-term consequences as easily as adults, and they sometimes don’t take care of their diabetes because they want to be like everybody else. So, it’s challenging during that time.

Physician Kathleen E. Bethin, of the University at Buffalo, led the local arm of a clinical trial that spanned 17 countries and involved more than 700 children worldwide (five from Buffalo) that resulted in the FDA approval of the drug Fiasp (insulin aspart injection, which means a fast-acting insulin) for children with diabetes mellitus. The drug, manufactured by Novo Nordisk and approved for children in December, was already available for adult use since 2017. Physician Lucy D. Mastrandrea, associate professor and division chief, endocrinology/diabetes in the department of pediatrics at UB and medical director of the Diabetes Center, was co-investigator in the trial.